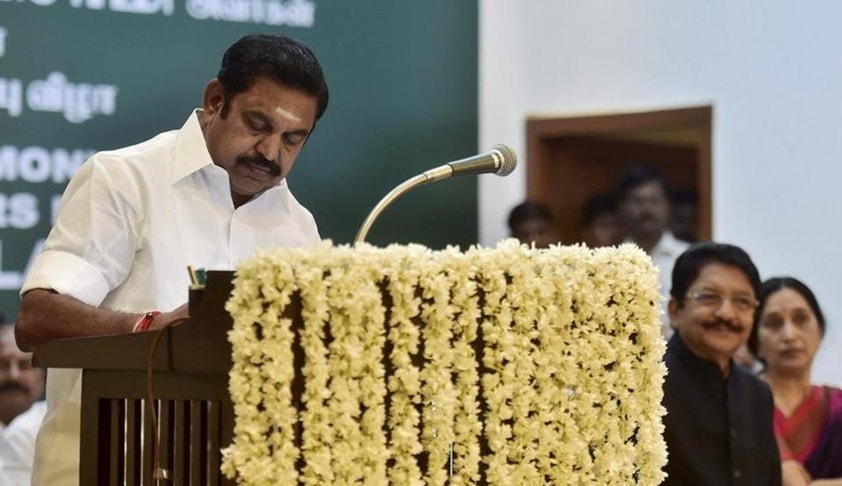 A Public Interest Litigation (PIL) has been filed in Supreme Court seeking to restrain Tamil Nadu Chief Minister, E.K. Palaniswamy, from holding the portfolio of the state's Ministry of Home Affairs till the completion of investigation and trail in the Sathankulam twin deaths of P. Jayaraj and J. Bennicks. The plea also seeks directions to the Crime Branch -...

A Public Interest Litigation (PIL) has been filed in Supreme Court seeking to restrain Tamil Nadu Chief Minister, E.K. Palaniswamy, from holding the portfolio of the state's Ministry of Home Affairs till the completion of investigation and trail in the Sathankulam twin deaths of P. Jayaraj and J. Bennicks.

The plea also seeks directions to the Crime Branch - Central Investigation Department (CBCID) to probe Palaniswamy's role in attempting to screen and safeguard the accused police personnel by misusing his constitutional post.

The twin death of the father-son duo was originally registered in an FIR as a routine procedure under the Code of Criminal Procedure (CrPC) to determine the cause of death. However, the family alleged that they were subject to physical torture by officials in the Sathankulam Police station and succumbed to injuries as a result of police brutality. The family filed a complaint on June 23, alleging police brutality against the two who had been taken in to pre remand custody.

As the allegations gained steam, the matter invoked strong sentiments from across the country, and the Madras High Court took suo motu cognizance of the same.

The petitioner, advocate A Rajarajan, points out that the High Court issued directions for free and fair investigation and set the criminal law process in motion on June 30. However it is also brought to the Court's notice that the High Court "lost sight of the complaint dated 23.06.2020 filed by the victim's family" in issuing directions, and thus failed to direct the registration of a case under 154 CRPC and to act according to the procedure established by law.

Notwithstanding this, the petitioner apprises the Court that TN CM Palaniswamy gave a public statement to the Press on June 24, claiming that the deceased succumbed to illness while ruling out any chance of foul play. This action, contends the petitioner, is contrary to law and done with the purpose to shield police personnel who come under the Ministry of Home Affairs, the portfolio of which is held by Palaniswamy.

"…the statement dated 24.06.2020 given by the first respondent (Palaniswamy) is highly improper, condemnable and contrary to law because the investigation procedure starting from 154 Cr.P.C and culminating in 173 Cr.P.C. where not even started till 30.06.2020 and the magisterial enquiry to determine the cause of death is at the preliminary stage."

To substantiate his claim, the petitioner further emphasizes that the Deputy Superintendent of Police, CBCID, took up the investigation on July 1, based on the High Court's directions from June 30, and came to a conclusion that certain police officials belonging to the Sathankulam Police Station did indulge in physical violence and subjected the deceased to torture. Thus, he adds, the FIR was altered to accommodate charges of murder under Section 302 of the IPC and subsequently some officials, including the erstwhile Inspector and Sub-Inspector of the said Station, were arrested.

In this light, submits Rajarajan, the statement made on June 24 by the CM "was with the purpose to safeguard the accused persons and thereby to prevent any adverse remark about his government since the accused persons were coming under the ministry held by (Palaniswamy) and to substantiate this allegations that (Palaniswamy) actively involved to screen and safeguard the offenders of custodial torture can be construed from the outcome of the (CBCID's) investigation."

Arguing that it prima facie seems that the CM acted contrary to the law and in derogation of his constitutional post to protect persons accused of custodial torture, it is prayed that he be restrained from holding the portfolio of Home Affairs in the interest of free and fair investigation.

The petitioner thus submits that Palaniswamy "holds the administrative and executive control over the (Deputy Superintendent of Police, CBCID) who is the investigation officer in the above said custodial torture and consequent death case.

…free and fair investigation is not at all possible under administrative leadership of (Palaniswamy) who is heading the home department and further the role of (Palaniswamy) in screening and safeguarding the persons accused of 302 IPC by using his official capacity have to be investigated."

It is thereby suggested that the CM may also be charged under provisions of the IPC for using his official capacity to try and shield persons accused of murder under Section 302 IPC.