Judges Are Not Above Law; Judicial Appointment Process Must Be Made Transparent, Says Justice Chandrachud [Read Judgment] 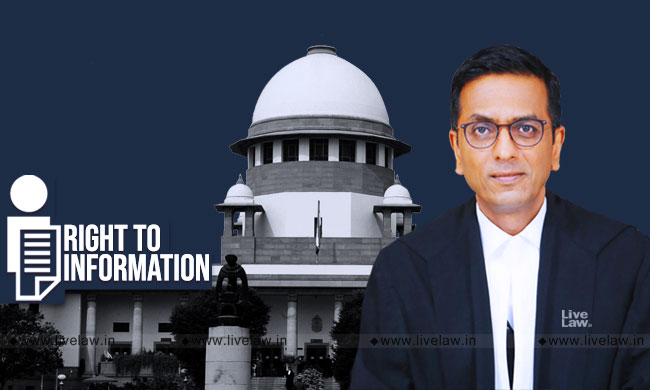 x
"Judicial independence is not a shield to protect wrong. It is not a carte blanche to arbitrary behaviour. "

Penning his separate but concurring opinion while dismissing the appeal against Delhi HC judgment that held office of CJI is under purview of RTI Act, Justice DY Chandrachud has observed that the basis for the selection and appointment of judges to the higher judiciary must be defined and placed in the public realm.According to him, this would promote confidence in the appointments process,...

Penning his separate but concurring opinion while dismissing the appeal against Delhi HC judgment that held office of CJI is under purview of RTI Act, Justice DY Chandrachud has observed that the basis for the selection and appointment of judges to the higher judiciary must be defined and placed in the public realm.

According to him, this would promote confidence in the appointments process, and also would foster a degree of transparency and promote accountability in decision making at all levels within the judiciary and the government. Following are the important observations made in the judgment by Justice Chandrachud:

The collegium is a victim of its own birth – pangs

The collegium owes its birth to judicial interpretation. In significant respects, the collegium is a victim of its own birth – pangs. Bereft of information pertaining to both the criteria governing the selection and appointment of judges to the higher judiciary and the application of those criteria in individual cases, citizens have engaged the constitutional right to information, facilitated by the RTI Act.

What needs to be emphasised is that the substantive standards which are borne in mind must be formulated and placed in the public realm as a measure that would promote confidence in the appointments process. Due publicity to the norms which have been formulated and are applied would foster a degree of transparency and promote accountability in decision making at all levels within the judiciary and the government. The norms may also spell out the criteria followed for assessing the judges of the district judiciary for higher judicial office. There is a vital public interest in disclosing the basis on which those with judicial experience are evaluated for elevation to higher judicial office particularly having regard to merit, integrity and judicial performance. Placing the criteria followed in making judicial appointments in the public domain will fulfil the purpose and mandate of Section 4 of the RTI Act, engender public confidence in the process and provides a safeguard against extraneous considerations entering into the process.

If the content of the right and the enforcement of the statute are to possess a meaningful dimension in their application to the judiciary – as it must, certain steps are necessary. Foremost among them is that the basis for the selection and appointment of judges to the higher judiciary must be defined and placed in the public realm. This is the procedure which is followed in making appointments but also in terms of the substantive norms which are adopted while making judicial appointments. There can be no denying the fact that there is a vital element of public interest in knowing about the norms which are taken into consideration in selecting candidates for higher judicial officer and making judicial appointments. Knowledge is a powerful instrument which secures consistency in application and generates the confidence that is essential to the sanctity of the process of judicial appointments. This is essentially because the collegium system postulates that proposals for appointment of judges are initiated by the judges themselves.

Essential substantial norms in regard to judicial appointments include: (i) The basis on which performance of a member of the Bar is evaluated for the purpose of higher judicial office; (ii) The criteria which are applied in determining whether a member of the Bar fulfils requirements in terms of: a) Experience as reflected in the quantum and nature of the practice; b) Domain specialization in areas which are geared to the evolving nature of litigation and the requirements of each court; c) Income requirements, if any, having regard to the nature of the practice and the circumstances prevailing in the court or region concerned; d) The commitment demonstrated by a candidate under consideration to the development of the law in terms of written work, research and academic qualifications; and e) The social orientation of the candidate, defined in terms of the extent of pro bono or legal aid work; (iii) The need for promoting the role of the judiciary as an inclusive institution and its diversity in terms of gender, representation to minorities and the marginalised, orientation and other relevant factors.

Judges are not above law

Judicial independence does not mean the insulation of judges from the rule of law. In a constitutional democracy committed to the rule of law and to the equality of its citizens, it cannot be countenanced that judges are above the law. The notion of a responsible judiciary furthers the ideal for which an independent judiciary was envisaged. It is the exercise of the decision making authority guaranteed by judicial independence in a just and responsible manner, true to the ethos of judicial office that sub-serves the founding vision of the judiciary.

Judicial independence is hence not a carte blanche to arbitrary behaviour.

Referring to observations made in the NJAC judgment, Justice Chandrachud observed that, though the dilution of the judiciary's autonomy in the context of making judicial appointments was deemed to be unconstitutional, but the need for transparency in judicial appointments has not been denied and has in fact been specifically acknowledged by some of the learned Judges. The judge added that failure to bring about accountability reforms would erode trust in the courts' impartiality, harming core judicial functions. Transparency and the Right To Information are crucially linked to the rule of law itself, the judge said.

According to Justice Chandrachud, the postulate that independence and accountability are conflicting values is a fallacy. Elaborating it further, the judge made the following observations:

The judiciary, like other institutions envisaged by the Constitution, is essentially a human institution. The independence of the judiciary was not envisaged to mean its insulation from the checks and balances that are inherent in the exercise of constitution power. The independence of the judiciary, is a constitutional guarantee of freedom. Notions of accountability however, concern the manner and ends for which the freedom guaranteed is employed. Where judicial independence focuses on freedom, judicial accountability is concerned with the manner in which that freedom is exercised by the adjudicator.

Adjudicators in robes are human and may be pre-disposed to the failings that are inherently human. But the law demands that they must aspire to a standard of behaviour that does not condone those failings of a human persona in the discharge of judicial duties.