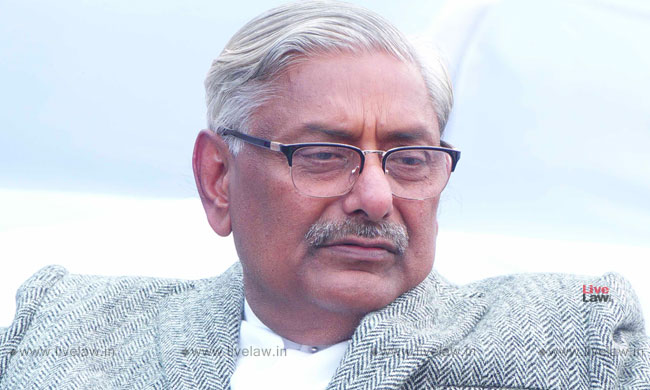 In response to an application filed under the Right to Information Act (RTI Act) seeking details about Supreme Court Justice (Retired) Arun Mishra's overstay in his official Bungalow, the Supreme Court has revealed that information in this regard cannot be provided as the same are exempt under Section 8 (1) (j) & Section 11 (1) of the RTI Act. This reply was given by the...

In response to an application filed under the Right to Information Act (RTI Act) seeking details about Supreme Court Justice (Retired) Arun Mishra's overstay in his official Bungalow, the Supreme Court has revealed that information in this regard cannot be provided as the same are exempt under Section 8 (1) (j) & Section 11 (1) of the RTI Act.

This reply was given by the Additional Registrar and Central Public Information Officer of the Supreme Court, Ajay Agarwal, in an application filed by Cherly D'souza.

The specific query raised in the RTI Application was:-

To this, the Supreme Court has replied,

As per Section 8 (1)(j) information which relates to personal information the disclosure of which has not relationship to any public activity or interest, or which would cause unwarranted invasion of the privacy of the individual unless the Central Public Information Officer or the State Public Information Officer or the appellate authority, as the case may be, is satisfied that the larger public interest justifies the disclosure of such information: Provided that the information, which cannot be denied to the Parliament or a State Legislature shall not be denied to any person, is exempted from disclosure.

"Each Judge shall be entitled without payment of rent to the use of furnished residence throughout his term of office and for a period of (one month) immediately thereafter, and no charge shall fall on the Judge personally in respect of the maintenance of such residence. This concession shall also be admissible to the members of the family of a Judge, who dies while in service, for a period of 1 (one month) immediately after his death."]

It may be noted that the RTI Reply also reveals that Justice (Retired) Arun Mishra was provided his official residence, 13, Akbar Road, New Delhi, on 10th September 2014.

Further, with regard to another query raised in the RTI Application seeking details of the market rent per month for the residence used by Justice (Retired) Arun Mishra post his retirement, the Supreme Court has given a reply in the following term

"The Information as sought is not available/maintained".

"Where a Judge occupies a residence beyond the period specified in rule 4, he shall be liable to pay, for the period of over stay, rent calculated in accordance with the provisions of Fundamental Rules 45-B together with full departmental charges or if the rents have been pooled, the pooled standard rent under Fundamental Rules 45-A whichever is higher."]

Significantly, the provisions cited by the Supreme Court while denying the information sought by the RTI Applicant, are Section 8 (1) (j) & Section 11 (1) of the RTI Act.

Section 8 (1) (j) of the RTI Act comes into the picture when someone seeks information about a third party and there is an element of privacy involved in the information sought for.

Further, Section 11 (1) of the RTI Act comes into picture when one needs a piece of information that relates to a third party, then the Authority needs to consult a third party.

In terms of Section 11 (1) of the RTI Act, in cases where the public information officers (PIOs) intend to disclose the information, which relates to or has been supplied by a third party and has been treated as confidential by a third party, it would be necessary for the concerned PIO to give written notice to the third party.

The concerned third party has a right to make a submission either in writing or orally and the concerned PIO is required to keep the same in view while taking a decision regarding disclosure of such information.

This provision applies where the information being considered for disclosure was originally given in confidence by that third party.