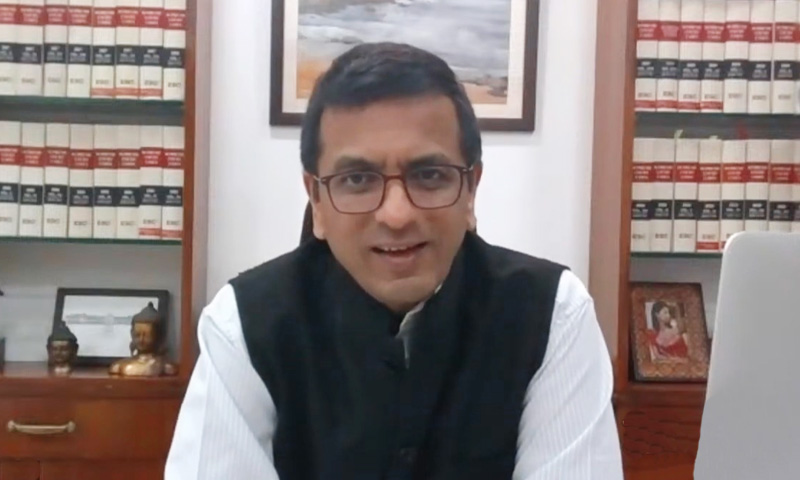 Supreme Court judge Justice DY Chandradhud said that there is an urgent need for legal measures to improve the conditions of app-based workers. He added that our laws must evolve to address the privacy concerns in the new age of information technology.Speaking at the Justice PM Mukhi Memorial Lecture on Saturday on the topic "Reconciling Rights and Innovation: Examining the Relationship...

Supreme Court judge Justice DY Chandradhud said that there is an urgent need for legal measures to improve the conditions of app-based workers. He added that our laws must evolve to address the privacy concerns in the new age of information technology.

Speaking at the Justice PM Mukhi Memorial Lecture on Saturday on the topic "Reconciling Rights and Innovation: Examining the Relationship Between Law and Technology", Justice Chandrachud said that it is crucial for us to reflect on the platform economy that has replaced traditional modes of employment.

With the introduction of several mobile or web-based apps, the labour market has fissured and the gig economy has had significant ramifications on existing business models for food, clothing and groceries.

The judge pointed out : "App-based companies have alleged immunity from labour law obligations because these platforms are legally structured as aggregators and intermediaries.Their contract-based relationship with app-based workers does not fit within traditional definitions of employment, and the disaggregated nature of app-based work makes collective bargaining with platforms difficult. As a result, traditional labour law in India, which exists as a dispersed set of statutes, has not been effectively applied to most platforms".

To illustrate, Justice Chandrachud asked how does the labour law requirements of maintaining a creche or statutory canteen or providing wages for overtime work translate in the emerging world digital spaces.

In this backdrop, Justice Chandrachud spoke about the need for urgent legal measures.

"Hence, a distinct blueprint of legal measures to effectively improve the conditions of app-based workers is urgently required. It is imperative that interventions cater to the distinct nature of app-based work, including ensuring autonomy for workers through increased transparency regarding fees earned and ability to choose work. At the same time, it should clarify minimum obligations of platforms towards enhancing worker welfare, especially concerning health, safety and skill development".

It is relevant to note that the Supreme Court had in December 2021 issued notice in a PIL filed by a gig workers' association -Indian Federation Of App Based Transport Workers (IFAT)- seeking welfare benefits given for workers under the labour laws.

It was argued in the petition that "gig workers" and "platform workers" are covered by the definition of "workman" within the meaning of all the social security legislations since they are in an employment relationship with the aggregators.

The petitioners have sought for declaring "gig workers" and "app based workers" as "unorganized workers" and/or "wage workers" within the meaning of Section 2(m) and 2(n) of the Unorganised Workers Social Welfare Security Act, 2008. The Social Security Code enacted in 2020 has a chapter dealing with the rights of gig workers.

Justice Chandrachud also spoke in the lecture about the need for evolution of  laws to address the privacy concerns arising out of internet usage. He pointed out that every transaction of ours and every site that we visit leaves electronic tracks, generally without our knowledge.

"These electronic tracks contain powerful means of information which provide knowledge of the sort of person that the user is and their interests. All of this data needs to be protected. In aggregation, this data may disclose the nature of an individual's personality: food habits, language, health, hobbies, sexual preferences, friendships, ways of dress and political affiliation. Privacy concerns are a serious issue in the information age, and our laws must evolve to address them".

The comments assume relevance in the context that India is yet to have a comprehensive legislation to afford protection to personal data. The Personal Data Protection Bill has been pending in the Parliament since 2019.

"Technology should be designed not with the solitary aim of efficiency, but to serve to the inherent value of every human being. An example of a potential solution to ensure that Artificial Intelligence is responsive to gender considerations and other ethical concerns is the application of certification processes. Commercial considerations may overlook societal discrimination and caste, class and gender- based marginalization. Solutions such as obtaining an AI certification in certain regions across the world have been introduced to further distinguish companies and better position them in the investor and consumer markets", he said.

Justice Chandrachud said the real power over the implementation of digital rights rests with technology companies, generally, and with engineers and designers, in particular. Addressing the programmers and engineers, the judge said :

"In effect, you are involved in translating human rights law into real life. Effectively, you are not just coding. You are invisibly rewriting the rules of our society, the menus from which our lives are being chosen. After all, in cyberspace code is law38. And with this power comes the responsibility to interrogate the codes that are coming out into the products. This is where thinking about the law and power relations within society can help you, specifically as the architects of our digital world. In this era of technology revolution, it is my earnest hope that the legal system, in dialogue with the scientific community, is able to address these concerns and democratize these spaces".