I Accepted Judgeship On My Mentor Soli Sorabjee's Advice And Never Regretted It For Even A Day: Justice Chandrachud 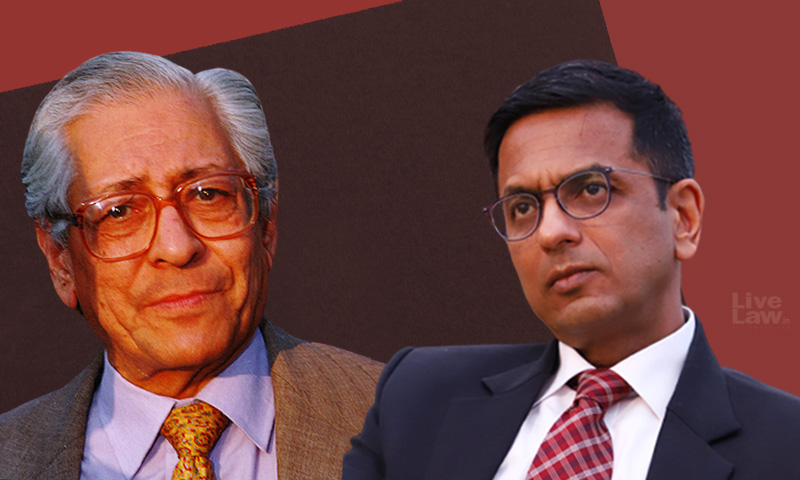 "For me, Soli Sorabjee has truly been a mentor! When I was asked to be a judge in 1998, I turned to him for advice. And he told me that the dice is cast and now I have to answer the 'call of service'!", told Justice D. Y. Chandrachud on Sunday.

He was speaking at a memorial organised in remembrance of Sorabjee who passed away from COVID-19 on April 30.

"Zia (lawyer Zia Mody, Mr. Sorabjee's daughter) had turned to me and said,

'Please ask Papa why he did not accept the advice that he has asked you to follow today'. But I accepted the advice of my mentor and I have never regretted it for even a day!" , narrated the judge.

"I can never forget the call in the middle of 1998 when he called me to ask me whether I would be willing to accept the position of ASG! I, of course, accepted with a great amount of attitude!", he said.

Justice Chandrachud canvassed Mr. Sorabjee's contribution in the 1964 Supreme Court decision in Mayer Hans George's case, where the majority held that the language of the FERA, which "throws on the accused the burden of proving that he had the requisite permission to bring gold into India", there was no scope for the invocation of the rule that besides the mere act of voluntarily bringing gold into India any further mental condition or mens rea is postulated as necessary to constitute an offence.

"In November 1962, a German national by the name of Mayer Hans George boarded a Swiss Air flight from Zürich destined for Manila. When he landed in Mumbai and was accosted by the DRI officials, he was found to have 24 hidden recesses in a jacket and to be in possession of 34 kg of gold. There was a notification of the Reserve Bank of 1948 that if you are in transit and in possession of gold, that was not an offence but that notification had been withdrawn in 1962. Mayer Hans George was convicted and sentenced. He appealed to the High Court and it was the 33-year-old Soli Sorabjee who led the appeal before the High Court. The bench of the Bombay High Court was presided over by Justice Y. V. Chandrachud. The High Court set aside the conviction. Mr Sorabjee argued that neither he nor Mr. Avinash Rana (who was the other counsel in the matter) had been able to locate the notification of the Reserve Bank of India in the library of the Bombay High Court! And hence, there was no way one could believe that a Swiss national who was a German would have any mens rea to violate the notification!", narrated Justice Chandrachud.

"The judgement of the High Court was, of course, reversed in appeal by the Supreme Court. But there was a tremendously eloquent dissent by Chief Justice Subba Rao", the judge added.

Continuing, Justice Chandrachud expressed awe that it was in1967 when Mr. Sorabjee argued the case of Satwant Singh Sawhney in the top court before a bench headed by Chief Justice Subba Rao where the Supreme Court held that the right to travel abroad was part of the fundamental freedom, which later was reiterated in Maneka Gandhi's case (1978).

"Mr Sorbajee's career spanned Satwant Singh, Keshavananda Bharathi, Maneka, Sunil Batra, DC Wadhwa, Bommai and Coelho- For a lawyer who had his moorings in Excise law, this was a remarkable evolution of Soli as a constitutional lawyer. He represented the voice of moral authority of a defender of personal liberty, of human liberty, both within and outside the court! He was a fearless crusader for human freedom and his columns in various newspapers bear testimony to this crusade", said the judge.

"The ultimate belief of the Guru who leads you from intellectual darkness to the light is that those who follow in his footprints, in the sands of time, will better or excel him and his art. The galaxy of the distinguished members of the bar that are present with us today is a testimony to Soli's ability to mentor and allow others to excel. Justice U. U. Lalit is truly a tribute to that ability of Mr Sorabjee to create and mentor professionals who will carry forth his legacy"

The judge described how one was always in awe to enter Mr. Sorabjee's chambers- his juniors sat on his left, the questions were always terse, he made distinctive notes at the back of his brief. "If you had a cold, you ran the risk of being thrown out of the chamber! It is so ironic that it was a virus that got him in the end...", reminisced Justice Chandrachud.

"The fate of a high-valued, multi crore matter would be sealed in a few minutes of conference!", quipped the judge.

"So one day in the Supreme Court corridor, he walked up to me and said 'You have to research on the Ordinance Raj. We will appear before the Constitution bench'. Now I didn't know what the Ordinance Raj was from Adam. But this was a book entitled "Repromulgation of Ordinances: Fraud on the Constitution of India" by Dr. DC Wadhwa who was a professor in the Gokhale Institute of Economics and Politics, and who had been researching the ordinances in Bihar and found a consistent pattern of re-promulgation of ordinances!"

The judge recalled how fascinating it had been the day when Mr. Sorabjee had called him up and told him to be at his chamber in Sundar Nagar, Delhi at 6 in the morning and just the pair of them had discussed the finer nuances of the case. "His formulation was down to one page! Such was the clarity of mind!", remarked Justice Chandrachud.

The judge went on to say that what marks out Mr. Sorabjee's career is a transformation from a top quality professional, from "the assembly line of brilliance from the Bombay bar", to "a citizen of the nation, which Delhi had brought about in him".

"When he moved to Delhi, he ceased to be only an eminent lawyer and he became a true citizen of the nation! And I believe his stewardship of the India International Centre was in so many ways a symbol, an emblem of his being a representative of the true traditions and values of the Indian bar and bound by constitutional faith and ideology!"

"His was a life committed to the rule of, and by, a just law...", signed off the judge.