In A Democracy People Should Have Faith in The Govt. Not Fear Of Govt: Justice Deepak Gupta 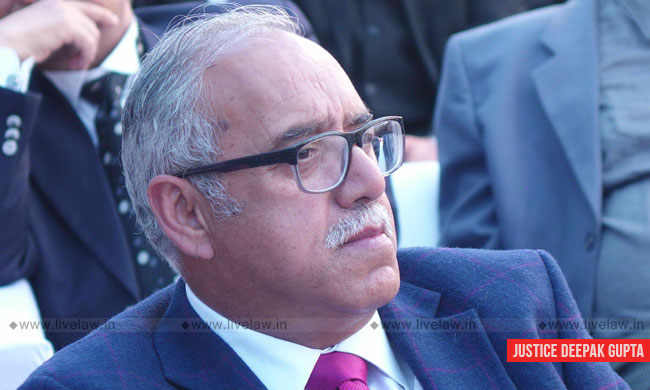 "Right to dissent is a hallmark of the democracy. Even if one party comes into power, it is not immune to criticism and right to dissent allows such criticism. There can be no progress if we stifle dissent", said Justice Deepak Gupta on Friday.Addressing the virtual audience at the webinar on the Right To Dissent organised by Live Law, the former Supreme Court judge said that it is a pleasure...

"Right to dissent is a hallmark of the democracy. Even if one party comes into power, it is not immune to criticism and right to dissent allows such criticism. There can be no progress if we stifle dissent", said Justice Deepak Gupta on Friday.

Addressing the virtual audience at the webinar on the Right To Dissent organised by Live Law, the former Supreme Court judge said that it is a pleasure to speak on a topic like this and that one would think that with what Bal Gangadhar Tilak and Mahatma Gandhi went through, the law of sedition would not exist.

"Disaffection is such a broad term that anything could amount to sedition. Our democracy gives us the right to freedom of speech and expression... We must not break, we must get together", he remarked.

" In the last 9-10 years, we have lost our sense of humor. Even today, I'm scared to share or crack a joke even with someone close to me because they might find it offensive...Look at the conviction rate, it is so low. But one's reputation is destroyed even if one is not convicted", he continued.

In response to whether the Supreme Court should take up cognisance of stifling of right to dissent and not be a mute spectator, Justice Gupta stated that suo moto action cannot be taken up in every case. "Supreme Court cannot take up suo moto every case. But, I do believe that High Courts should take up the cause. They are entitled to do so", he explained.

"If there is no incitement to violence or threat to public order, there is no sedition- if you look at the very concept of sedition, even from the point of view of the law as we have today and as it was interpreted in Kedar Nath and Balwant Singh, and judges understand what it is. We are not only on the procedure but the very basis of the law itself – even if the law is not unconstitutional, it has to be read as interpreted in Kedar Nath, that incitement to violence is indispensable to constitute the offence! If there is no violence involved, it will be like in the Balwant Singh case, where antinational slogans were raised but the Supreme Court said that there is no sedition. Why are the police and the authorities not trained that everything is not sedition? In the past 4 to 5 years, it has become the norm that anybody can file a case!", explained the judge.

"I was in Law school in Delhi during the emergency. Those 19 months of repression were harsher then what regime we have right now. I will not say that this is harsher. At that time, we just could not think of speaking. But when this pent-up emotion was released after 19 months, we all know what the results were. I don't think that when you repress, it helps the government in the long run. But that does not give them any right to repress voices! If jail is the rule, voices are stifled!", he expressed.

"As regards is this 'Fridays for Future' event (with which activist Disha Ravi, implicated for sedition in the Toolkit case, was associated), parents are asking their children not to go. They are worried. They feel that tomorrow my child would also be hauled up in like manner. And this is when they are only going to talk about the environment and nothing else. Few years ago, when my daughters were also going to support a demonstration, we were worried. So in times like these, it is not that there is nobody worry", continued the judge.

As regards the workload in the lower judiciary and the belief that overburdened judicial officers were not functioning asjudges but as clerks, Justice Gupta asserted that he does not agree with this view at all.

"But we must also train them well in the academy. Most academies get in the law school mode of teaching them subjects, whereas the training should be more of a professional nature. No one bothers with section 167, CrPC. Every time I have gone to the academy, I have said that it is a constitutional duty, you are taking away the liberty of a citizen! If you instill that in a magistrate, he thinks that I am like the High Court, I am performing the constitutional duty. But a great deal of sensitivity is also needed in this duty!", he elaborated.

He urged the people to not tarnish the entire judiciary with one brush, warning that more harm is caused to this movement if we do so.

"There might be some aberrations, there are some good judgements, and some bad odd judgements. This has always happened, even earlier during the emergency. Today, a couple of judges made some remarks praising someone. I don't support this, but there was a huge hue and cry. 20 years back, when J1 of the Supreme Court wrote a letter to the PM, nobody said anything! So they can be a counter also", he continued.

While Justice Gupta maintained that we must have faith in the judiciary, he conceded he also feels at times that probably the judiciary is not working till the best of what is expected from it. "I also have more expectations from the superior courts, the constitutional courts. They must come up and say that this cannot be done! The time has come for the judiciary to grab a case and say that we will pass this order!", he exhorted.