If Some Party Gets 51% Votes, It Doesn't Mean That The Other 49% Should Accept Whatever Is Done By Majority Without Protesting : Justice Deepak Gupta [Video] 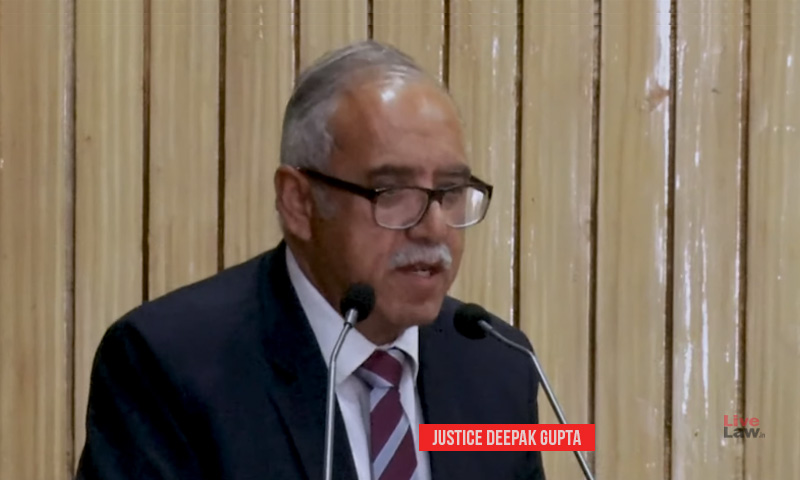 x
Majoritarianism is an antithesis of democracy, the judge said.

Supreme Court judge Justice Deepak Gupta on Monday spoke about the importance of dissent in democracy, and criticized the trend to brand those who raise questions at the establishment as "anti-nationals".He was delivering a lecture on the topic "Democracy and Dissent" as a part of event organized by the Supreme Court Bar Association.Though rule of majority is the integral part of...

Supreme Court judge Justice Deepak Gupta on Monday spoke about the importance of dissent in democracy, and criticized the trend to brand those who raise questions at the establishment as "anti-nationals".

He was delivering a lecture on the topic "Democracy and Dissent" as a part of event organized by the Supreme Court Bar Association.

"In a country like India, where democracy is based on the 'first past the post system', more often than not, those in power will not represent the majority of the voting electorate, let alone the majority of people.

Let us assume they got 51% votes of population, does that mean that the other 49% people should keep silent for next five years and say nothing? Does than mean that those 49% have no voice for the five years...that they must accept whatever is done and not protest against it?.

Every citizen, whether he voted for you or not voted for you, has a right to participate in the democratic process", the judge said.

Dissent is part of right to life

Dissent must be encouraged. It is only through debate, discussion and dialogue that we can strive for better ways to run the country better, he said. Without questioning and challenging old norms, new thoughts will not come. If nobody challenges the accepted norms, that society will become a stagnant society.

"Therefore, right to dissent and right to question is not only an inherent part of democracy, it is also the inherent party of right to life itself", Justice Gupta said.

"If a country has to grow holistically, not only in terms of economic development and military might or anything, civil rights of the citizens must be protected", he added.

"To question, to challenge, to verify, to ask for accountability from government, these are every citizen's rights. By taking these rights, we will become an unquestioning, moribund society, which will not be able to develop any further", he said.

Trend of branding those who dissent "anti-nationals" criticized

Justice Gupta expressed anguish at the recent trend to brand those who dissent or question as "anti-nationals".

Quoting from a talk given by Justice D Y IChandrachud at Ahmedabad on February 15, Justice Gupta said

"Just because you hold a contrary view does not mean you are going against the country. It may be towards the govt, but not towards the country", Justice Gupta emphasized.

A Citizen has the right to get together and protest, but in a peaceful manner. Government is not always right. So long as a person is not breaking the law , he has every right to protest and voice dissent, added the judge.

Justice Gupta also spoke against the rising trend of bar associations to pass resolutions vowing to not represent those who are accused of cases such as sedition.

"I see many Bar Association resolutions that they will not appear for such and such cases saying the act is anti national .It is wrong. When bar associations say something like that (won't appear for certain people), that is obstruction of justice", he said.

Justice Gupta also reminded that legal fraternity has always been in the forefront to protect civil liberties, and urged the present generation to keep up the constitutional traditions of the bar.

Justice Gupta then moved on to talk about dissent by judges in judgments. He said that at times, the dissenting judgment goes on to become the future law.

He referred to the slavery judgment of United States, where slavery was held to be constitutional. But one out of eight judges dissented. The dissenting judgment went on to become the future law.

He then referred to the dissent of Justice Fazal Ali in A K Gopalan case, which was later accepted in Maneka Gandhi case.

Second important dissent in Justice Subba Rao's dissent in Kharak Singh stating that right to privacy was a fundamental right. This view was later accepted many years later.

"Justice Subba Rao's dissent was way ahead of its time", he remarked.

Next, he mentioned Justice Hidayattullah's dissent in Naresh Mirajkar case on whether judicial actions can be challenged as violating fundamental rights.

"This is still a minority judgement. But time will tell if it changes or not," Justice Gupta said on this.

The recent dissenting judgments of Justice Chandrachud in Aadhaar case and Justice Indu Malhotra in Sabarimala case were also mentioned.

Then he talked about, what according to him was the most important dissent : Justice H R Khanna's dissent in ADM Jabalpur case, which cost him the post of Chief Justice of India.

"There is no holy cow as far as dissent is concerned. All institutions, including armed forces, can be subjected to criticism", Justice Gupta added.

Towards conclusion, he said that if we attempt to stifle dissent, we will become a police state, which our founding fathers did not want.

He ended by quoting from Tagore's poem "Where the mind is without fear...", which he said was a tribute to dissent.

Justice Gupta received a standing ovation from the audience after his talk.

SCBA President Senior Advocate Dushyant Dave told Justice Gupta in return "in today's environment of fear, what you have said would warm many hearts".

"Your lecture will assume great significance in today's times as you have encouraged us to speak up", Dave added.