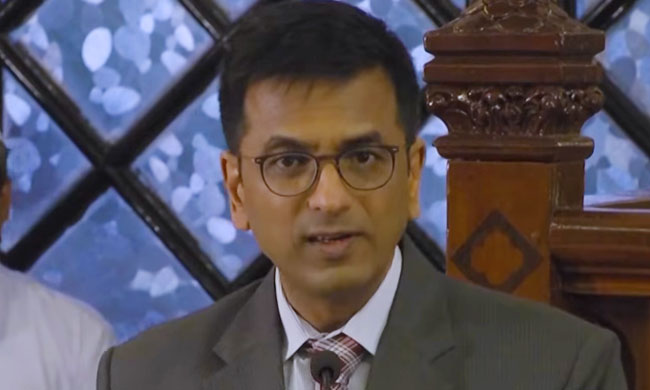 x
"This is an application for anticipatory bail for the legal profession to be given another chance to heal itself", he remarked.

"The ground-reality of legal aid accessible to persons in need is far from perfect", said Justice D. Y. Chandrachud on Saturday.He was speaking at the launch of NALSA's pan-India Awareness and Outreach Campaign at Vigyan Bhawan, New Delhi.Elaborating, he cited how only recently, he was hearing a matter where a convict had undergone a sentence of 16 and 19 years without availing of their right...

"The ground-reality of legal aid accessible to persons in need is far from perfect", said Justice D. Y. Chandrachud on Saturday.

Elaborating, he cited how only recently, he was hearing a matter where a convict had undergone a sentence of 16 and 19 years without availing of their right to submit an application for premature release. And how the judge was dealing just last week with the case where charges had not been framed after 12 years of incarceration. "Such is the state of affairs that neither our jail superintendent is conversant with the basic legal remedies available to the convicts and undertrials nor are they provided adequate legal assistance. With little or no contact to the outside world, even educated prisoners, who are laypersons, may not be competent to pursue their rights", commented Justice Chandrachud.

He flagged as the problems the inadequacy of human resources, lack of infrastructure, low quality of legal services and lack of monitoring over the empanelled legal advocates and less remuneration and incentives to lawyers. However, he stated that the burden of remitting this does not fall on NALSA or any one institution but constitutes a "collective failing" of the legal fraternity and requires a multi-pronged strategy to fill the gap between access to legal aid and persons in need. "This is an application for anticipatory bail for the legal profession to be given another chance to heal itself", he remarked.

As the Chairman of the E-Committee of the Supreme Court, Justice Chandrachud stated that the E-Committee is not just a committee on technology but a committee that is using technology for widening the access of justice in a socially purposive manner. He threw light on the various initiatives in this direction- "The Department of Justice launched the tele-law programme in 2017 to provide pre-litigation legal advice and consultation. Under this, panel lawyers can be connected to persons in need of legal aid. One of the missions in the e-committee is to provide E-Seva Kendra in every one of the 17,000 institutions of the courts across the country. Another programme of interest is Nyaya Bandhu, a pro bono legal services programme, in which advocates interested in volunteering their services are connected by a mobile application. A network of these lawyers is to be maintained by each High Court. The Department of Justice also involves law students by way of clinical legal education. Law students started actively participating in the enforcement of rights before the court like in the case of Swapnil Tripathi where the Supreme Court held for there to be live telecast of court proceedings. Hence, it is imperative to tap into this resource"

The judge expressed that the integration of technology with legal administration offers numerous opportunities to use creative means to enable access to justice. One such way would be to use artificial intelligence-enabled chat box to provide automated legal advice. "This has already been implemented in the US by the 'DoNotPay' platform and other countries such as Russia, China, Mexico and is worth exploring in India...Also, with the onset of virtual conferencing amid the pandemic, more advocates can now be encouraged to go to courts in remote areas"

Justice Chandrachud spoke of the reforms for capacity-building of lawyers willing to provide pro bono services-
"Studies have indicated that advocates empanelled with the state and district legal authorities lack competence or initiative. In most countries, the legal system is in the form of a public defender system, an assigned counsel system and a contract services system. The NALSA's present approach is in the shape of the assigned counsel system where the cases are assigned to lawyers on a panel. In addition to its public defender initiative, NALSA can consider entering into partnership with the structured component of the legal fraternity, that is corporate law firms, to tap on their capacity of human resources with a cutting approach to different areas of law. The NALSA can enter into contracts with law firms through the department of justice and the ministry of law, requiring them to spend a certain number of hours delivering pro bono legal aid services. This may be made mandatory similar to corporate social responsibility for companies or maybe considered as one of the relevant factors when empanelling law firms for contractual work for the government of India or the PSUs"

Justice Chandrachud indicated that Pro bono work is also a factor for designation as senior advocate following the decision in Indira Jaising. 'Perhaps the Bar Council of India can consider introducing Pro bono in some capacity at the time of renewal of the certificate of practice every five years", he suggested.

He expressed that the development of clinical legal education is another factor to be considered- "The Bar Council of India has introduced legal clinical education in the curriculum and provided for the establishment of legal aid clinics in law schools. The department of justice has already recognised the potential of these clinics to act as a bridge between clients and lawyers. The clinics must be given more recognition as the students can act as para-legal volunteers in drafting applications, giving opinions, and persuading their alumni base to represent clients assisted by the clinics. The Bar Council of India must consider making clinical education credit-based and mandatory, which reflects in the academic performance of students, similar to clinics in law schools across the globe"

Finally, Justice Chandrachud spoke of the creation of a case type specific database which, he said, is the need of the hour.

"The provision of legal aid services can be enhanced if the lawyer is dedicated to a particular cause or responsible for only those cases. An instance of this was seen in 2018 with the rise of the me-too movement where young women lawyers started offering their services free of cost to assist women who had been sexually harassed. This created databases of lawyers who could be approached for specific issues. In my opinion, such an exercise should be conducted at an institutionalised level. Presently, legal aid cases through Nalsa are only assigned to empanelled lawyers who may not have specialised practice areas. It may be worthwhile for NALSA to solicit its support from young lawyers who are passionate about certain specific issues. This in turn would also provide comfort to hesitant individuals to seek legal aid without the fear of being shamed or harassed. A similar exercise could also be conducted for sexual minorities or transgenders. Many individuals belonging to this category are closeted and do not seek legal aid out of the fear of disclosure of their identity. They also face significant threats to life by society and even by their own family. They can meet these lawyers either physically or via virtual conferencing", he elaborated.

In conclusion, he asserted that the right to free legal aid relates to our basic conception of equality. Without this right, the constitutional promise of security and liberty and justice for all would ring hollow. "As India is in its 75th year of independence, we must build on our experience and re-imagine the structure of the legal system to ensure that our law is not merely the tools in the hands of the privileged but can also have a profound impact and ameliorate the lives of the poorest of the poor", he signed off.