'Citizens Are Entitled To Know What Goes On In The Court', Justice DY Chandrachud On Live-Streaming Of Court Proceedings 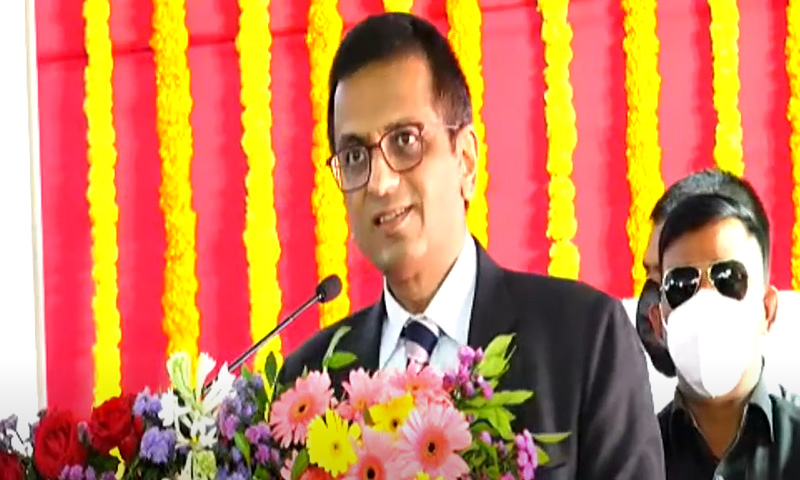 "We have formulated live streaming rules so that cases can be live-streamed, the hearings before a court can be live-streamed for the rest of the country. Because I do believe that citizens are entitled to know what goes on in the courts, they are entitled to know why cases are adjourned, whether judges sit from morning to evening in deciding cases. It is the basic right of the citizens to...

"We have formulated live streaming rules so that cases can be live-streamed, the hearings before a court can be live-streamed for the rest of the country. Because I do believe that citizens are entitled to know what goes on in the courts, they are entitled to know why cases are adjourned, whether judges sit from morning to evening in deciding cases. It is the basic right of the citizens to know", told Justice DY Chandrachud on Saturday.

He was speaking at the Inaugural Function of 'B' & 'C' Wings of the High Court Annexe Building of Bombay High Court, Bench at Aurangabad.

The judge threw light on several projects, proposed and underway, of the Supreme Court E-Committee, of which he is the Chairperson, to indicate how to use technology to pave the way for moving into the future. He remarked, "Let us also celebrate some of the achievements of the Indian judiciary"

"We find from the National Judicial Data Grid that we have 15.42 crore orders available on the NJDG. 4 crore cases are pending but we have 11 crore cases on the NJDG which have been disposed off and of which orders are available. The High Courts have 56.02 lakh cases pending, but 3.17 crore cases have been disposed off. During the COVID pandemic, 2.18 crore cases were registered in India and 1.48 crore cases were disposed off by the district judiciary in India. 55.75 lakh judgments are now available on the NJDG. We have an elastic search facility so lawyers who cannot afford the cost of paying for a software in the open market can search what they want to- whether it be a case under labour law or under the Motor Vehicles Act", he told.

"Virtual courts have been set up across the country. 12 states and union territories including Maharashtra have a virtual court. You will be interested to note that as many as 91,000 cases involving traffic challans have been disposed off and 180 crores worth of fine has been realised from citizens who can pay fines on the online portal of the virtual courts. We provide citizen centric services for common citizens. The service portal which has been created by the E-committee with the Department of Justice has 75 lakh hits per day and the mobile application has 35 lakh hits per day. 3.85 lakh SMSes and emails are sent by the E-courts services to the citizens across the nation. Our website, in one year, has had 224 crore transactions", he continued.

"We propose to set up E-Seva Kendra across India so that all the services under the judicial system will be brought under 1 roof- virtual courts, e-filing, e-payment, certified copies, process fee. Imagine a woman who has been deserted by her husband and who has to recover Rs.1000 per month as maintenance. Does she have to come to the court every month to receive that Rs.1000? We have 19,000 courts on the ICT platform, over 3000 court complexes and 1000 jails with video conferencing", he told.

"Our next stage in the E-courts project is the phase 3 document where we propose to digitise as many as 3100 crore documents. But digitisation must go hand-in-hand with e-filing. Because if we don't have e-filing, five years down the lane we will be digitising old documents. Bombay, Allahabad, Telangana, Madhya Pradesh, Delhi will lead the five pilot projects for digitisation across the country", he continued.

"We are looking at data privacy, and access to differently-abled who cannot see or hear so that they can access our website. Finally, under the interoperable criminal justice system, we are linking every aspect of the administration of criminal justice, namely, prisons, courts, the police station and the forensic science laboratory", he said.

Having spoken about the celebration of justice, Justice Chandrachud insisted that "we must also understand the flipside of the work we do". "Just like we have a cause for celebrating justice, let us also have a cause for introspection, self-reflection on what path in the future lies ahead for us", he said.

"Sitting in the Supreme Court, you are confronted with the extent of Justice and the extent of injustice all over the country when citizens come to us. A convict who has been in prison for 35 years has not been released, an undertrial who is in jail for 12 years and against whom charges have not been framed! These are some of the realities of the Indian judiciary which we have to confront"

Talking of the state of Maharashtra, he pointed out, "We have over 48 lakh cases which are pending as of date. 21,000 cases are more than 30 years old. The oldest case incidentally is from Sangola taluka where the accused has been absconding since 1958. God knows whether the accused is even around. 16,000 cases where a stay has been granted by the Bombay High Court. There is a special Darkhaast of 1958 which is pending before the Civil Judge, Senior division, Ratnagiri in which Bombay High Court had granted stay in the second appeal in 2008. These are some of the problems we have to face and confront"

"We all dress in black and white as judges and lawyers. Our attire is a symbol of the homogeneity of our profession. The reason why we dress like each other is because we represent one mission, which is the mission to achieve justice to the common citizen. But don't be misled by this sense of homogeneity of our bar and bench, which represents the universal pursuit of justice. 1 + 1 is equal to 2 in mathematics, but in the court of law, 1 + 1 does not always make 2. That is because we are dealing with human relationships and the human relations which we unravel as judges and lawyers are deeply influenced by our social ethos, by the cultural traditions of the work that we do, of the historical ethos of the histories of discrimination which many of our people, not just in the state, but across the nation have suffered. So it is in this quest for justice that we have unified today as judges and lawyers", reflected the judge.

"The truth is one, the paths to truth are many. But in the court of justice, you realise another truth and the truth which you realise in the court of law and justice is that even the truth is not one, that there are many shades of truth, there is no one universal truth. If you believe that there is only one truth as a judge or lawyer, you forget the essence of humanity", he continued. Justice Chandrachud was of the view that it is important that the young members of the bar are nurtured, looking forward in the next 50 years to what lies in store.

The judge articulated that the new building is a landmark in the history of the Aurangabad bench of the Bombay High Court and of Maharashtra itself- "Our ability to enhance services for the citizens have been placed in the limelight and focus. It will provide an opportunity for lawyers, for judges to be dedicated to the cause of justice. The building, in a sense, is a symbol of the ethos of Marathwada, but above all it represents the best values of the state of Maharashtra- the values of diversity, of tolerance, of respect for plurality of cultures in the state"

"We must at the outset begin with paying homage to judges and lawyers who worked ceaselessly for the bench of the High Court at Aurangabad to be established. I was fortunate as a young child to play in the garden of Justice V. S. Deshpande who stayed at Ajanta bungalow on Narayan Dabholkar Road in Mumbai. He was a compassionate human being but behind that smile lay a personality of steel, who would stand by his principles to ensure that the bench was established", expressed the judge.

Narrating another anecdote, Justice Chandrachud said, "I came to Aurangabad in 1992 as a young lawyer when I was on my way from Mumbai to Udaipur, as I was telling the Chief Justice of India yesterday. Our flight- Indian Airlines; there was no competition in the market then- landed at Aurangabad, but we could not take off because it was too hot and there were too many big people. We stayed at Rama hotel where Indian Airlines had put us up. I hopped across and went and stood next to the gate of the High Court judges' complex at 6:30 in the morning and saw all the judges walking on the road which connects the High Court to the residences. I stood there in awe, looking at the High Court judges, looking and saying, 'Oh, so judges walk in the morning'"

"In 2000, when I became a judge of the High Court, I was all of 40 years of age, lacking in experience in judging cases. But my lack of experience was made up for by the enthusiasm of the bar, guidance of my peers including the senior judges of the High Court and by the tremendous sense of vision which the seniors brought to the task. We were short of judges in those days, I was hearing everything from appeals to civil revisions to petitions under 227 and some under 226. We would begin our work very often at 9 in the morning and go on till 6:30 in the evening. I have happy memories of that time. I learnt a great deal, not merely about the law, because learning about the law is an incidental facet of a judge's life; it is learning about the life which is critical to your functioning as a judge", expressed Justice Chandrachud.