Paperless Court Not Possible Without A Change In The Mindset Of Bar And The Bench: Justice DY Chandrachud 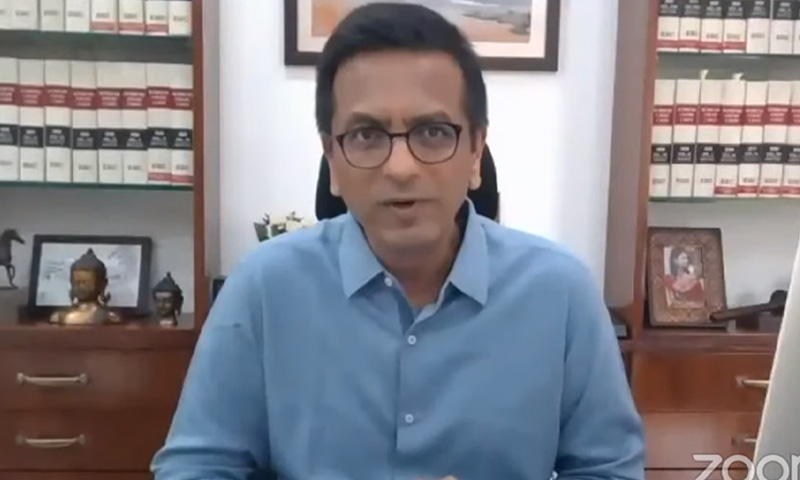 Supreme Court Judge Justice DY Chandrachud on Saturday said that none of the efforts of the e-committee of the Supreme Court or the High Courts could be possible without a change in the mindset of the bar and the bench."I believe a change in the mindset must be brought about both among lawyers and amongst judges. When I started working on a paperless court about a year and a half ago, I was...

Supreme Court Judge Justice DY Chandrachud on Saturday said that none of the efforts of the e-committee of the Supreme Court or the High Courts could be possible without a change in the mindset of the bar and the bench.

"I believe a change in the mindset must be brought about both among lawyers and amongst judges. When I started working on a paperless court about a year and a half ago, I was like any other judge, groomed and trained in the traditional ways of learning and of doing your work. As a judge of the Supreme Court, I have also had to adapt to the advancement in technology, necessitated by the pandemic, and make a departure from my earlier manner of working that I was accustomed to. I made my own notes in the software, all the caseload is digitised and scanned".

The Chairman of the Supreme Court E-Committee was speaking at the inauguration of the Orissa High Court Digitization Centre, Paperless Court, e-Filing Stations for Advocates, Hands-on Training for Judicial officers on conducting Virtual hearing and Hands-on Training on e-Services for the Advocates.

He narrated that last year, he had the benefit of interacting with a visually challenged judicial clerk, who was a Rhodes scholar, and he was also able to assist the judge thanks to the digitisation and scanning of all records and e-filing. "In doing so, I have been able to successfully run a paperless chamber, increasing the efficiency of work!", he said.

Justice Chandrachud acknowledged that it is natural that any new development may be met with a certain resistance as it attempts to alter the well-established practices:

"In particular, we have to carry the lawyers along with us, and the judicial officers. Lawyers will really be with us when they realise that these initiatives will make their lives less complex, friendly and simple and facilitate their work. For judicial officers, this will not mean more burden that the Supreme Court or the High Court is dumping on their shoulders. It will make your life simpler, as it has mine. It is natural that we will encounter a certain degree of resistance but it will only find its true ground to stand on if all the stakeholders involved continue to tread the path together", he expressed.

He explained that a paperless court, as the name suggests, is a court that functions without the physical paper books, where judges rely on digitised court records and use technology for facilitating the court proceedings.

"The simplicity of the paperless initiative does not do justice to the numerous benefits that can be achieved with it- the most immediate impact of the paperless initiative would be the environmental benefit of having digitised court records. Apart from this, digitisation of court records, coupled with e-filing, leads to ensuring speedy delivery of justice by reducing the time and resources needed for management of physical courts, said the judge.

The pendency of cases is the foremost hurdle in the Indian justice delivery system, with a total of 56 lakh cases pending before the High Court. At the Orissa High Court, around 1,82,000 are currently pending, 842 of which are more than 32 years old. So it is a welcome move for a paperless court to be launched in the Chief Justice's court, with the aim that this project is extended to all district courts in the state and all benches in the High Court", he continued.

He commended how the order communication portal allows for instant paperless communication of orders of the High Court to subordinate courts and the e-filing of petition signals the level of commitment of the Orissa High Court to the cause of the e-courts project.

He hailed the Orissa High Court for establishing an e-filing station at the High Court, saying that the e-filing station is a remedy to a significant barrier to the e-courts project- that of narrowing the digital divide, particularly for advocates who lack the financial resources and are not digitally literate to benefit from the technology-driven services being provided. If such services are provided by the High Court, it would also aim to reduce the hesitation among the members of the bar to adopt newer technology, making the transition to a virtual environment fairly smooth.

The judge expressed that the launch of the High Court digitisation centre which would provide amenities for preservation, scanning and storage of High Court records is relevant for record-keeping for posterity. "We have to be careful in ensuring that this digitisation is sufficient for posterity and for eternity", he said.