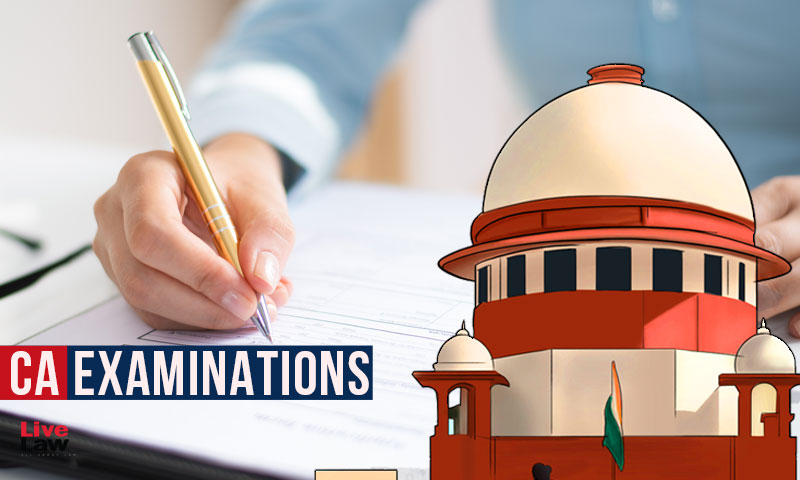 The Supreme Court on Tuesday has adjourned a petition filed by certain CA aspirants, seeking uniform Standard Operating Procedure (SOP) to be followed during the upcoming physical examinations to be conducted by ICAI.

A Bench led by Justice AM Khanwilkar has asked Advocate Bansuri Swaraj to serve the copies to the Central Government and the Institute of Chartered Accountants of India (ICAI), and has listed the matter for hearing on November 2, 2020.

The CA examination is scheduled to be held between November 21, 2020 and December 14, 2020. The Petitioners, represented by Advocates Bansuri Swaraj and Astha Sharma, have submitted despite less than a month left for the commencement of the said Examinations, no steps have been taken so far by the concerned authorities with respect to health safety guidelines of the candidates and other stakeholders.

"At present, no safety guidelines have been issued by ICAI that determine the manner in which ICAI would be conducting the exams in the month of November, 2020 which would ensure the safety of the candidates amidst the ongoing pandemic and inter alia effectively control overcrowding of candidates at the exam centers," the Petitioners ventilated.

They have alleged that the ICAI proposes to conduct the examination in absolute violation of the Central Government guidelines which prescribes a cap of 100 persons in academic congregations.

They have pointed out that this time, the number of candidates appearing for the CA examination will be significantly higher as the May 2020 round of exam was cancelled and the same has now been merged with the exams due in November.

Thus, it is urged that any infraction in the safety and security standards would invariably lead to material infringement of Fundamental Rights of the petitioner-candidates.

"Because the instant examination is an important professional qualification/ milestone for the Petitioner Candidates herein, any discrepancy in its proper conduct would prejudice the performance of the candidate which shall in turn materially infringe the Petitioners' Fundamental Right to practice any profession, or to carry on any occupation, trade or business as guaranteed under Article 19 (1) (g) of the Constitution of India," they submitted.

1. Examination authorities must establish isolation rooms in the premises of each exam centre for isolating anyone who may have the symptoms.

2. A symptomatic candidate should be referred to the nearest health centre. Thereafter, the examination authorities are required to give a reasonable opportunity to such candidate to take the exam through other means or at a later date.