'If I Recuse, Will It Be Giving Into Media Trial?' : Justice Kausik Chanda Of Calcutta High Court Reserves Order On Mamata Banerjee's Plea Seeking Recusal 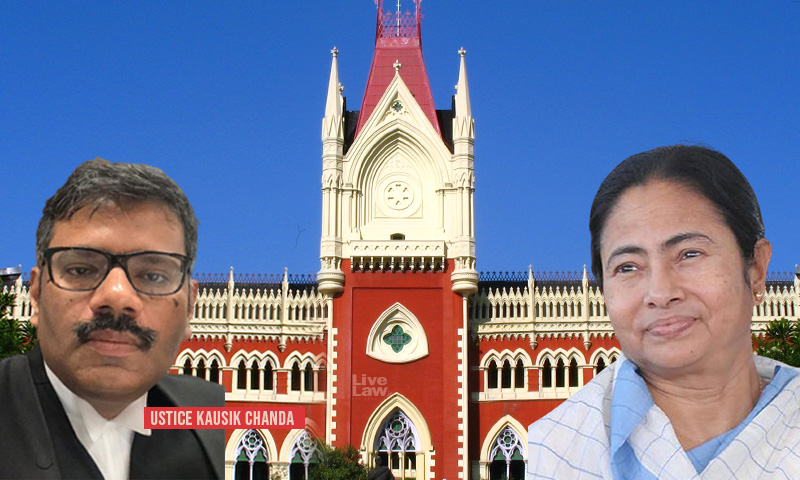 A single bench of Justice Kausik Chanda of the Calcutta High Court on Thursday reserved order on an application moved by West Bengal Chief Minister Mamata Banerjee seeking the judge's recusal from hearing her election petition.The Chief Minister has objected to Justice Chanda hearing her petition citing "likelihood of bias "due to the associations the had with BJP during his days as a...

A single bench of Justice Kausik Chanda of the Calcutta High Court on Thursday reserved order on an application moved by West Bengal Chief Minister Mamata Banerjee seeking the judge's recusal from hearing her election petition.

The Chief Minister has objected to Justice Chanda hearing her petition citing "likelihood of bias "due to the associations the had with BJP during his days as a lawyer.

On Recusal of Justice Kaushik Chanda

During the course of hearing today, a question was posed by Justice Chanda to Senior Advocate Dr.Abhishek Manu Singhvi, appearing on behalf of Mamata Banerjee, as to why the aspect of recusal wasn't raised before the Bench during the last hearing on June 18.

"This case was listed before me on 18th. That day no one said that Petitioner has sought re-assignment apprehending bias? Is it not duty of the Counsel to point this out? You appear in Courts across the country Dr. Singhvi, what is the standard practice?" the judge asked.

Responding to this, Singhvi replied that since a formal application was yet to be filed, there was no mention of recusal on the earlier date.

At this juncture, Justice Chanda inquired that since the letter written by Chief Minister to the Acting Chief Justice seeking Justice Chanda's recusal was pending, should he wait for an administrative order or should he proceed judicially.

To this, Singhvi replied:

"It is your Lordship's prerogative to decide the matter on judicial side. If you see a ground, you may recuse at your own discretion. A request pending before the CJ is irrelevant after your Lordship has judicial sesien of matter."

Stating that there was a "clear conflict of interest" in the matter, Singhvi went ahead to submit that the judge may decide the application of recusal judicially and that the order will be subject to challenge either way.

Highlighting the reasons for the apprehension of bias, Singhvi submitted that Justice Chanda has been "closely associated with BJP" and that he was earlier the head of Legal Cell of BJP and has also appeared previously on behalf of BJP in various cases.

Showcasing some instances gathered from public sources showing Justice Chanda's "close, personal, professional, pecuniary and ideological relationship" with the BJP, Singhvi submitted that Justice Chanda is yet to be appointed as a permanent Judge of the High Court and that Mamata Banerjee has conveyed her objections and reservations to such confirmation.

"It is duty of the Court to see that proceedings are free from any partiality. Justice must not only be done but seen to be done. If fair minded people are likely to pre-judge the case, they will not have confidence in justice system. Recusal application was filed at the earliest possible opportunity. This answer your Lordship's query- nothing has happened yet that this Court cannot decide the recusal application." Singhvi submitted.

Hearing this, Justice Chanda stated that the petitioner has full right to move for recusal and that matter will be decided judicially.

During the course of hearing, Singhvi began narrating an incident of 2018 wherein Justice Chanda appeared for BJP. However, Justice Chanda replied by saying that he was unable to recollect the aforesaid incident.

Singhvi also relied on the tweets of Prashant Bhushan and Derek O'Brien showing pictures of Justice Chanda (as a lawyer) participating in some BJP meetings.  On this, the judge confirmed that the pictures shown in the tweets were his.

Justice Chanda also said that it was not uncommon for lawyers to have political affiliations. He mentioned that Dr.Singhvi himself is associated with Indian National Congress.

"Judgeship is a divine role of doing justice. It is different from being a lawyer", Singhvi replied.

Urging the judge to "recuse graciously",Singhvi submitted "Please take it that what I argued today was said on June 18. Would it have looked nice for me to say all this without an affidavit?"

To this, Justice Chanda responded by asking that since a "media trial" started after June 18, will it not look like he has been influenced by it.

"There is a media trial already ongoing before this issue came up before Court. Hundreds of tweets have already been posted saying he should recuse. If I recuse now, will I be giving in to this media trial?", Justice Chanda asked.

Responding to this, Singhvi submitted that public opinion does not matter for a judicial determination.

The senior lawyer also asked if it is really worth it to get involved in the controversy.