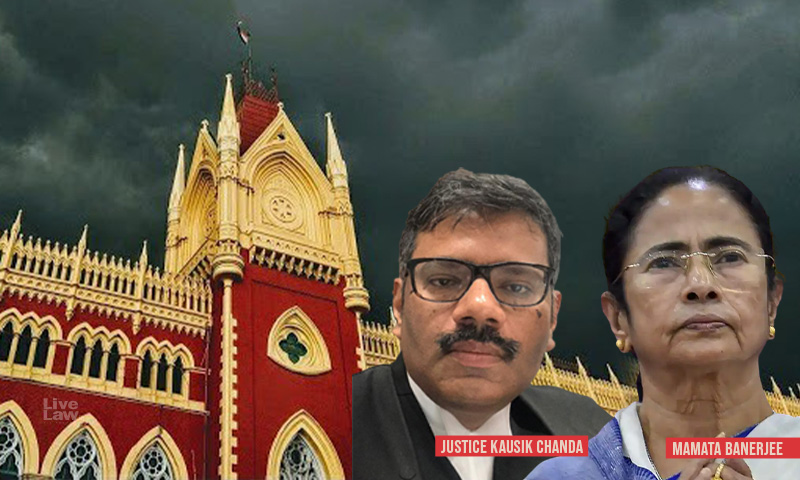 x
"Dramatists were ready to launch a well rehearsed drama outside the Court", the Calcutta High Court judge observed, recusing from the case.

Justice Kausik Chanda of the Calcutta High Court on Wednesday observed that he does not have a conflict of interest in the election petition moved by West Bengal Chief Minister Mamata Banerjee, challenging the Nandigram election results, where she was defeated by BJP's Suvendu Adhikary in the 2021 Assembly Polls. The Judge however, decided to recuse himself from the hearing, saying...

Justice Kausik Chanda of the Calcutta High Court on Wednesday observed that he does not have a conflict of interest in the election petition moved by West Bengal Chief Minister Mamata Banerjee, challenging the Nandigram election results, where she was defeated by BJP's Suvendu Adhikary in the 2021 Assembly Polls.

The Judge however, decided to recuse himself from the hearing, saying that if the matter continues before him, then some 'trouble-mongers' will continue to keep the controversy alive and even find new controversies to affect the proceedings.

"The imbroglio stemmed from the inception of the litigation was due to the assignment of this case before this Bench. Since two persons involved in this case belong to highest echelon of State politics, in the name of saving the judiciary, some opportunists have already emerged. These trouble-mongers will try to keep the controversy alive and create newer controversies," Justice Chanda remarked.

"The trial of the case before this Bench will be a tool to aggrandise themselves. It will be contrary to the interests of justice if such unwarranted squabble continues along with the trial of the case. Such attempts need to be thwarted at the threshold. Hearing of this case should proceed seamlessly like any other litigation before this Court."

Observing thus, the Judge recused himself and released the case from his list.

Justice Chanda was seemingly referring to widespread discussion in the social media regarding his association with the BJP legal cell during his days as a lawyer.

He opined that it is very natural for a lawyer to be associated with the legal cell of a political party. However, it is preposterous to think that as a Judge, he will not proceed with the matter impartially.

Justice Chanda clarified that he has no pecuniary interest in the matter and personal interest so alleged, if any, should be shown to be direct, not remote.

He stated that he does not personally know any of the parties involved in the matter and has absolutely no conflict of interest. However, the manner in which his pictures from 2016, when he was associated with BJP legal cell were disseminated and misconstrued in social media, it is apparent that a conscious attempt was made to influence his decision on the recusal application.

The Judge observed that across the country, there is practice to approach the same Judge for recusal, to whom the case is assigned. However, Banerjee moved the administrative side by writing a letter to the Acting Chief Justice.

"The election petition was first taken up for hearing on 18th June 2021, before this Bench, and quite surprisingly, nothing regarding recusal was revealed. No clue was given to me as to the fact that the petitioner had already approached the Hon'ble Acting Chief Justice for reassignment of the petition," Justice Chanda said.

He stated that Singhvi's justification that they wanted to file a formal recusal application does not gel with the fact that many prominent leaders from Banerjee's party tweeted and gave public interviews, seeking his recusal from the case.

"The script was already prepared; the dramatis personae were ready to launch a well-rehearsed drama outside the Court," the Judge remarked.

He opined that there was a "deliberate and conscious attempt" to influence his decision, before the recusal application was moved.

Justice Chanda further said that such "calculative, psychological and offensive attempt" to seek recusal need to be firmly repulsed and therefore, a cost of Rs. 5 lakh is imposed upon Mamata Banerjee, payable to the Bar Council of West Bengal.

"In this case, the question of pecuniary interest does not arise at all. The interest, therefore, must be direct and not remote or tenuous. It is not the case of the petitioner that either of the parties to the proceeding is personally known to me. If a lawyer appears in several cases for a political party, his association with the legal cell of the party or with its leaders is natural. In this country, it is almost impossible not to get a person who may not have said to have some political views. Anyone interested in politics may be said to have an "interest." Like any other citizen of the country, a Judge also exercises his voting rights in favour of a political party, but he lays aside his individual predilection while deciding a case," Justice Chana observed.

"A lawyer's mind is trained not to identify himself with his client and at the same time be loyal to his duty towards his client. When a lawyer moves from Bar to Bench, he carries with him the same sense of detachment already in-built in him. Ironically, two leading counsel engaged in the case have well known political identities adverse to the petitioner's party. It is preposterous to suggest that a Judge having a past association with a political party as a lawyer should not receive a case involving the said political party or any of its members. The past association of a Judge with a political party by itself cannot form apprehension of bias. This proposition, if allowed to be accepted, would be destructive to the long-lived and deep-rooted notion of neutrality associated with the justice delivery system and lead to the unfair practice of Bench hunting to resist a fair adjudication by an unscrupulous litigant."