"There Are Many Sub-standard Law Colleges In The Country, Which is A Very Worrying Trend. Judiciary is Attempting To Correct It"; Justice NV Ramana 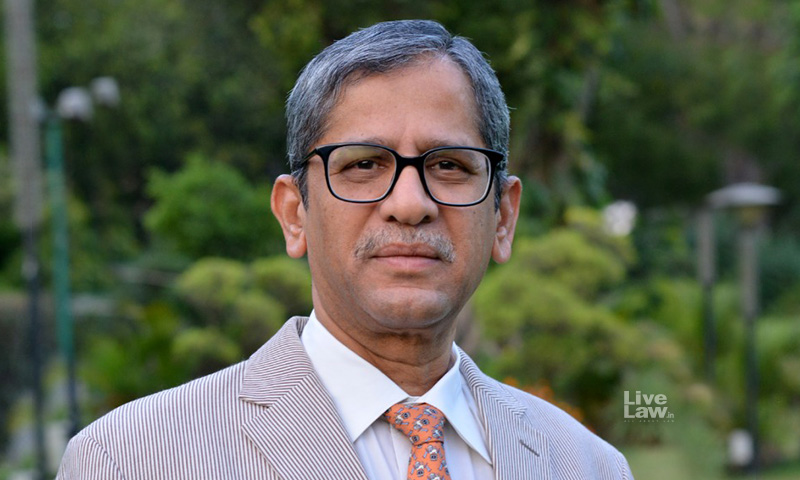 "There are many sub-standard Colleges in the country, which is a very worrying trend. The Judiciary has taken a note of this, and is attempting to correct the same",remarked Justice NV Ramana today while delivering the convocation address in the 4th, 5th, 6th and 7th Convocation ceremony of Damodaram Sanjivayya National Law University (DSNLU)."We have more than 1500 Law Colleges and Law...

"There are many sub-standard Colleges in the country, which is a very worrying trend. The Judiciary has taken a note of this, and is attempting to correct the same",remarked Justice NV Ramana today while delivering the convocation address in the 4th, 5th, 6th and 7th Convocation ceremony of Damodaram Sanjivayya National Law University (DSNLU).

"We have more than 1500 Law Colleges and Law Schools in the country. Nearly 1.50 lakh students graduate from these Universities including the 23 National Law Universities. This is a truly astounding number. This demonstrates that the concept that the legal profession is a rich man's profession is coming to an end, and people from all walks of life are now entering the profession because of the number of opportunities and increasing availability of legal education in the country. But as is often the case, "quality, over quantity". Please do not take this wrongly, but what proportion of graduates who are fresh out of college are actually ready or prepared for the profession? I would think less than 25 per cent. This is in no way a comment on the graduates themselves, who certainly possess the required attributes to be successful lawyers. Rather, it is a comment on the large number of sub-standard legal educational institutions in the country which are colleges merely in name".

"One of the consequences of the poor quality of legal education in the country is the exploding pendency in the country. There are nearly 3.8 crore cases pending in all the Courts in India despite the large number of advocates in the country. Of course, this number must be seen in the context of the around 130 crore population of India. It also shows the faith that people repose in the judiciary. We must also keep in mind, that even cases that are filed only yesterday become a part of the statistic regarding pendency." He said

In his address, Justice Ramana told the graduating students that being young law graduates, they have the potential of being the "drivers of social change" and therefore this responsibility comes with a burden of raising the voice of those rendered voiceless.

"You must be the conscience bearers of the nation. Educate people as to their rights, and provide legal guidance whenever you can. These are heavy burdens to bear, but I am sure you are all strong enough to bear it."

"Through your determined efforts you can empower communities, both locally and globally. Remember, your voice matters." Justice Ramana said.

Justice Ramana started the address by speaking about Damodaram Sanjivayya, former CM of Andhra Pradesh and Minister of Labour for Government of India. In the address, Justice Ramana said that everyone can learn from Damodaram Sanjivayya's exemplary life, his values and his service to the people of the nation. Saying so, Justice Ramana recounted a "famous anecdote" wherein once Pandit Jawaharlal Nehru was considering Sanjivayya's candidature for the post of CM. As many other leaders could not digest this decision, multiple complaints about Sanjivayya being corrupt were made to Nehru. In view of this, a secret enquiry was called upon by Nehru to be conducted by one of his intimate friends.

On reaching Sanjivayya's village, the leader stopped his car in front of a straw hut Sanjivayya's mother was cooking with a clay pot using firewood. When she was informed about his candidature, she remarked "Will my son be able buy a coal burning stove for me now? It is very difficult to cook using firewood at my age." It was after this incident that the leader felt no further need of an inquiry.

Remembering the incident, Justice Ramana said "Damodaram Sanjivayya was a man of integrity and multifaceted personality. He was a selfless politician responsible for many path breaking initiatives including setting up of the AntiCorruption Bureau to check corruption in government offices. He strived for transparent and corruption- free administration."

On Being a First Generation Lawyer and Life Struggles

In a motivational speech, Justice Ramana informed the graduating students that like many of them, even he was a first generation graduate from his family who came from a rural background. Recounting his young days as a law student, Justice Ramana said that he remember how struggling it was for the students then to education themselves.

"When I compare my student days to that of the present generation, I feel that all of you are so very fortunate. You have abundant resources, facilities and unlimited access to a world of information. With your knowledge, and enthusiasm, you can create ideas and innovate, and thereby improve the existing methods, systems and the society as a whole." Justice Ramana said.

Quoting British Prime Minister Winston Churchill wherein he said "A pessimist sees the difficulty in every opportunity, an optimist sees the opportunity in every difficulty", Justice Ramana went ahead to motivate the students by suggesting them to have a "constructive attitude" by which they should always attempt to determine solutions.

Responsibility of Teachers and Educational Institutions and Reformation of Educational System

Moving ahead with the address, Justice Ramana further remarked that one of the aims of education is to train the students and prepare them to participate in nation building, responsibility of which lies on the teachers and such institutions. While remarking so, he went ahead to state that the education system in India is currently "not equipped to build the character of young students" in order to develop a social consciousness and responsibility.

"Students are often caught in the "rat race". All of us should therefore make a collective effort to revamp the educational system to ensure that students can have the right outlook to their career and life outside." He remarked.

Stating that today's young law graduates are tomorrow's judges and lawyers, Justice Ramana further remarked that one must be aware of the challenges and problems with the society to uphold justice in all its facets. "A theoretical understanding of the law is an incomplete understanding of it, as any new graduate who enters the profession understands soon after starting their practice. It is this divide, between theory and practice that the best type of Legal Education attempts to bridge." Justice Ramana said.

Justice Ramana further remarked that the goal of a law school is to make a Law Graduate socially relevant and technically sound. According to him, young law graduates must be the "social engineers" because law is considered as "an instrument of social change".

Stating that young law graduates have multiple avenues like lawyers, Legal Executives, Arbitrators, Mediators, Solicitors and Judges available to then, he also said that Law Students have to be able to explain their point clearly and precisely with flawless communication skills.

"In order to further their practical knowledge, Law Schools should expose students to clinical education through Lok Adalats, Legal Aid Centers and Arbitration and Mediation Centers. Students should actively work with Legal Service Authorities, as it would give them the opportunity to work closely with the justice delivery system." Justice Ramana remarked.

Quoting the famous words of Mahatma Gandhi "Silence becomes cowardice, when occasion demands speaking out the whole truth and acting accordingly.", Justice Ramana remarked that law graduates as being the drivers of social change, have a heavy burden to raise their voice on behalf of those rendered voiceless.

"The most vulnerable are often the victims of human rights atrocities, by either the State or by anti-social elements. As young advocates, you are best placed to strongly oppose the same through legal action. You must be the conscience bearers of the nation. Educate people as to their rights, and provide legal guidance whenever you can. These are heavy burdens to bear, but I am sure you are all strong enough to bear it." He said.

Giving a small piece of advise to the young graduates, Justice Ramana said that they must look at the society from where they have come and at the nation which has invested a great hope in all of them. Advising so, he urged the students to rely on the culture, time vested values and wisdom of India's great philosophers.

"The hallmark of a civilized individual is to give back to society. You should work ethically and whole-heartedly in your own chosen field to enhance the public good. You have to make the whole world and the future generations proud of our country through your actions, and enhance the prestige of the country internationally." He remarked.

"You are the stewards of this nation and custodians of a very rich tradition. I hope that you contribute in giving back something to this society, to this great nation which has bestowed you with so many privileges. Once again, I congratulate each and every one and wish you success in all your future endeavors. God bless you and have a happy life ahead."