Breaking- "Threat To Life From Shiv Sena Leaders": Kangana Ranaut Moves SC Seeking Transfer Of Three Criminal Cases Against Her From Mumbai To Court In HP 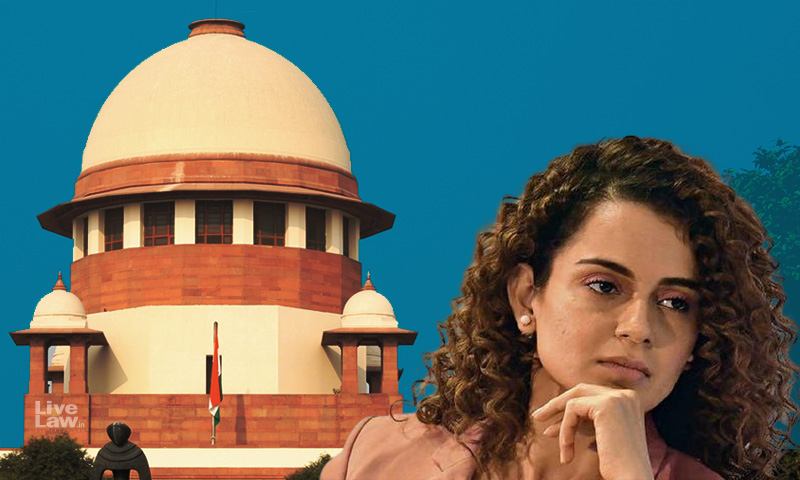 Bollywood actress Kangana Ranaut and her sister Rangoli Chandel, who are facing prosecution in three criminal cases in Mumbai for her critical remarks on social media, has moved the Supreme Court seeking transfer of these cases to Himachal Pradesh."Petitioners face a threat unto life if the trials proceed in Mumbai, because of personal vendetta of Shiv Sena leaders against...

Bollywood actress Kangana Ranaut and her sister Rangoli Chandel, who are facing prosecution in three criminal cases in Mumbai for her critical remarks on social media, has moved the Supreme Court seeking transfer of these cases to Himachal Pradesh.

"Petitioners face a threat unto life if the trials proceed in Mumbai, because of personal vendetta of Shiv Sena leaders against the Petitioner"

The petition filed through Advocate Neeraj Shekhar seeks transfer of the following cases: 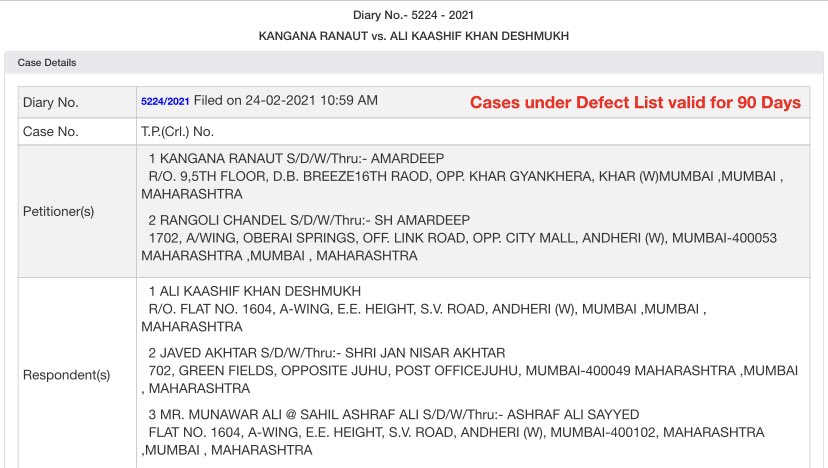 1. Criminal complaint filed by Advocate Ali Kashif Khan Deshmukh in the Court of Metropolitan Magistrate, alleging that Ranaut caused disharmony between Hindus and Muslims by her tweets

Advocate Ali Kashif Khan Deshmukh had filed a criminal complaint against actor Kangana Ranaut before the Andheri Magistrate Court for allegedly causing disharmony between Hindus and Muslims and for allegedly mocking the judiciary after a Magistrate Court in Bandra ordered FIR to be registered against the siblings.

In his complaint, Khan referred to several tweets by the actor on various subjects. He has cited the example of Kangana's tweet on Mumbai turning into "Pakistan Occupied Kashmir", her calling state Home Minister Anil Deshmukh as 'Talibani' etc.

2. Criminal defamation case filed by veteran lyricist, Javed Akhtar before the Court of Metropolitan Magistrate, alleging that Ranaut had made defamatory remarks against him to Republic TV in the aftermath of actor Sushant Singh Rajput's death.

Akhtar had filed a private complaint in November 2020 through advocate Jai Bharadwaj against Ranaut under sections 499 and 500 (defamation) of the Indian Penal Code.

In his original complaint Akhtar accused Ranaut of damaging his "immaculate reputation by falsely attributing statements to him," in her interview to Republic TV anchor Arnab Goswami, on July 19.

Following Ranaut's failure to appear, the Court issued a bailable warrant against her.

Sayyed has alleged that the sisters deliberately made the tweets to bring hatred and excite disaffection towards the Maharashtra Government.

In this regard, he referred to instances wherein Kangana and Rangoli's tweets were allegedly communal. Her tweets on lynching of Hindu Sadhus at Palghar, calling the BMC "Babur Sena" after her office was demolished, claiming that she is the first person to make a movie on Chhatrapati Shivaji Maharaj and Rani Laxmi bai of Jhansi in a "Islam dominated industry", blaming Jamaatis for spreading Corona virus etc are cited by the complainant alleging that Kanagana tried to create hatred and communal tensions between Hindus and Muslims deliberately.

The duo thereafter moved the Bombay High Court seeking quashing of the FIRs, which was opposed by the complainant.

The sisters have now urged the Top Court to transfer all the three cases to Himachal Pradesh, their hometown. As of now, the matter is under defect and the date of listing is yet to be notified.