'State Of UP Can't Go Ahead With Kanwar Yatra. 100%' : Supreme Court Asks UP To Reconsider Decision To Allow Physical Yatra 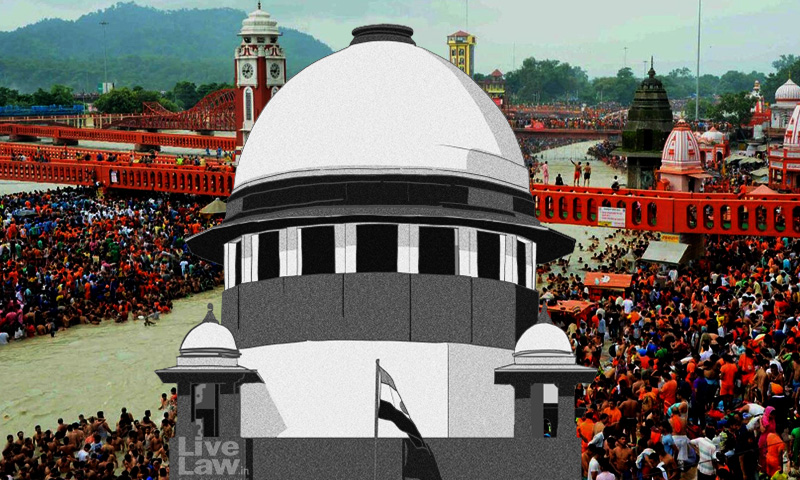 The Supreme Court on Friday said in categorical terms that the State of Uttar Pradesh cannot go ahead with its decision to allow the Kanwar Yatra in the State amid the COVID-19 pandemic.A bench headed by Justice RF Nariman asked the State of Uttar Pradesh to reconsider its decision to allow physical yatras and get back to the Court on Monday."Either we will pass orders directly, or will give...

The Supreme Court on Friday said in categorical terms that the State of Uttar Pradesh cannot go ahead with its decision to allow the Kanwar Yatra in the State amid the COVID-19 pandemic.

A bench headed by Justice RF Nariman asked the State of Uttar Pradesh to reconsider its decision to allow physical yatras and get back to the Court on Monday.

"Either we will pass orders directly, or will give you one more opportunity to reconsider your decision", Justice Nariman orally told Senior Advocate CS Vaidyanathan, who was appearing for the State of Uttar Pradesh.

A bench comprising Justice RF Nariman and BR Gavai was hearing the suo moto case taken on the decision of Uttar Pradesh Government to allow Kanwar Yatra amid the COVID pandemic.

When the matter was taken, Solicitor General for India Tushar Mehta told the bench that the stand of the Union of India is that the yatra should not be allowed.

"The state governments must not permit the movement of kanwariyas to bring Gangajal from Haridwar to do abhishekam in the local Shiv Temples", the SG informed the bench about the stand of Union Government.

Taking note of this, Justice Nariman said that the State of UP cannot go against the stand of the Union Government.

"State of UP cannot go ahead with this. 100%", Justice Nariman said.

Senior Advocate Vaidyanathan, appearing for UP, informed the bench that the State wants the yatra to be 'symbolic'. However, if any person wants to undertake physical yatra due to "compelling religious reasons", he can do so, subject to the conditions of getting registration with the specified authorities, having fully vaccinated certificate or negative RTPCR results. The senior counsel said that strict conditions have been imposed to regulate the yatra.

"Total ban is not practical. We have allowed the yatra in a symbolic manner, with limited number of devotees under stringent conditions", Vaidyanathan said.

"Mr Vaidyanathan, there is one thing. Either we pass the orders directly or give you one more opportunity to reconsider holding yatra physically. The pandemic affects all of us. We are all citizens of India. This suo moto case is taken because Article 21 applies to all of us. It is to safeguard all of us".

On this, Vaidyanathan agreed to get instructions from the state government on revisiting the decision to allow the physical yatra by Monday, July 19.

The order dictated by the bench after this exchange stated as follows :

"This court pointed out given the Covid pandemic and the fear that looms over all the citizens of India of a third wave hitting us, whether the authorities would be in a position to reconsider the holding or allowing of physical yatra at all. We are of prima facie view that it concerns all of us as citizens of India and is at the heart of the fundamental right to life. The health of citizenry of India and right to life is paramount, all other sentiments whether be religious is subservient to this basic fundamental right".

The bench also recorded that the State of Uttarakhand has cancelled the kanwar yatra.

"Amid fears of a possible third wave of Covid-19, the Uttarakhand government has suspended the kanwaryatra even as neighbouring Uttar Pradesh is pressing ahead with the annual ritual that sees a heavy movement of pilgrims across states in the northern belt".

While neighboring State of Uttarakhand decided to call off the Kanwar Yatra, citing the pandemic risk, Uttar Pradesh has decided to allow the pilgrimage yatra with certain curbs.The yatra is proposed to be held from July 25 to August 6. As per a report in the Indian Express, the last time the yatra was organised in 2019, nearly 3.5 crore devotees (kanwariyas) had visited Haridwar while over 2-3 crore people had visited pilgrimage spots in Western UP.

On Wednesday Justice Nariman had said to SG Tushar Mehta "We read something disturbing in the Indian Express today that the state of UP has chosen to continue with the Kanwar yatra, while the state of Uttarakhand with its hindsight of experience, has said that there will be no Yatra. We wish to know what the stand of the respective governments is. The citizens of India are completely perplexed. They don't know what is going on. And all this amid the Prime Minister, when asked about a third wave of Covid striking the nation, saying 'we cannot compromise even one bit'. We are issuing notice to the Centre, the state of UP and the state of Uttarakhand and because the yatra is scheduled to leave from 25 July, we want them to file an early response so that the matter can be heard on Friday"

The Court had issued an order which stated that "Given the disparate stances, it is important that the Home Secretary, Union of India respond to this news report. Given the fact that this yatra is to take off from 25th July it is necessary to fix a short time table. Affidavit will be filed by Friday morning by the Principal secretary, state of Uttarakhand, Home Secretary, Union of India and Principal Secretary, state of UP. This court has taken suo motu cognizance and has that issue issued notice to the state of UP and Uttarakhand and Union of India to file response. List on Friday. Order to be sent to the Chief Justice of India"

(Case : In Re : Alarming Newspaper Report Regarding Kanwar Yatra in State of UP, Suo Motu Writ Petition(c) No. 5/2021)