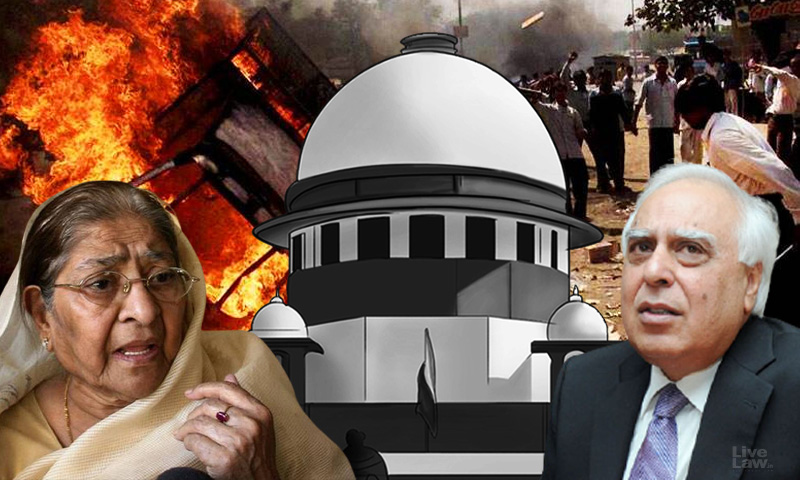 During the arguments in the Gujarat riots case before the Supreme Court, Senior Advocate Kapil Sibal got emotional talking about the dangers of communal violence and recalled that he had lost his maternal grandparents in the violence during the aftermath of partition.Sibal was appearing for Zakia Jafri, the widow of Congress leader Ehsan Jafri who got killed in the 2002 Gujarat Riots, in...

During the arguments in the Gujarat riots case before the Supreme Court, Senior Advocate Kapil Sibal got emotional talking about the dangers of communal violence and recalled that he had lost his maternal grandparents in the violence during the aftermath of partition.

Sibal was appearing for Zakia Jafri, the widow of Congress leader Ehsan Jafri who got killed in the 2002 Gujarat Riots, in her petition challenging the clean chit given by the Special Investigation Team to the then Gujarat Chief Minister Narendra Modi and other high functionaries in the "larger conspiracy" behind the communal riots.

Sibal argued before a bench comprising Justices AM Khanwilkar, Dinesh Maheshwari and CT Ravikumar that the SIT submitted a closure report in the case by ignoring several crucial evidences and without doing proper investigation.

After making detailed submissions regarding the lapses of the SIT, Sibal said :

"My concern is really for the future. Let me put it in colourful terms. Communal violence is like lava erupting from volcano, be it by any community. It is institutionalized violence. Wherever the lava touches the ground, it scars it and leaves the earth fertile for future revenge".

At this point, Sibal was seen choking with emotions and almost teary-eyed.  "I lost my maternal parents...in Pakistan.. I am a victim of the same", he continued.

Regaining his composure, Sibal asserted, "I don't want to accuse A or B. A message must be sent to the world that this cannot be tolerated".

Sibal argued that the SIT did not arrest any accused persons, record their statements, seize their phones, or conducted spot visits. He highlighted that the SIT ignored the tapes of the sting operation done by Tehalka magazine, in which many persons had given open statements about their participation in the violence and accumulation of weapons and bombs.

Although the same tapes were used for conviction in the Naroda Patya case, and although the Gujarat High Court had endorsed the authenticity of the tapes, the SIT ignored them in Zakia Jafri's complaint. Sibal submitted that the SIT did not even seize the phones of the persons in the sting tapes and gather their call data records.

"In Naroda Patya case, the man was convicted on the basis of these sting tapes. But qua other cases, these tapes are not considered", Sibal said, adding that it was a "disturbing and disconcerting" omission by the SIT.

"In case of conspiracy, there won't be direct evidence. It can only be inferred from circumstances, for which you have to investigate, gather evidence, visit spot, record statements. None of these done by the SIT", he argued.

"There has to be an investigation. That is all our case about. If there is no investigation, what was the purpose of the Supreme Court constituting the SIT?", he argued.

Sibal highlighted that the SIT discarded the testimony of the then Gujarat ADGP RB Sreekumar IPS on the ground that he was making the statement due to a denial of promotion.

"His(Sreekumar) testimony was corroborated by other officers and hence it could not have been rejected..", Sibal said.

Sibal also submitted that there were factors pointing out to complicity of the police and the administration which were ignored by the SIT.

"Curfew was declared immediately in Godhra..but in Ahmedabad, curfew was not declared until 12. And thousands of people had gathered by 7 morning. Any police officer would have immediately declared a curfew so that violence could be avoided", he said. The state intelligence reports regarding the Kar Sevaks returning armed with Trishuls and presence of communal tension were ignored.

Sibal also read out portions from the transcripts of Tehalka report to contend that they showed the conspiracy by members of Bajrang Dal, VHP and Sangh Parivar to stockpile weapons, to make diesel and pipe bombs and to import ammunitions from other states prior to February 27, 2002. He argued that the that tapes suggested conspiracy to smuggle dynamite bombs to Ahmedabad from quarry operated by a VHP worker. These aspects not investigated by the SIT, Sibal added.

The arguments will continue in the afternoon at 2 PM. For Live Updates from the hearing, visit this page.