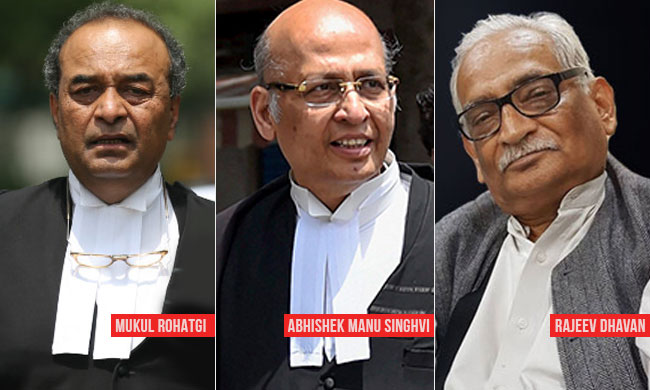 Senior Advocate Mukul Rohatgi, appearing for the 10 rebel MLAs, started by saying that the stance taken by the Speaker in a presser on Thursday evening and the statements in his application moved in the top court were 'contradictory' "He gave mixed signals in the press conference after bis meeting with the MLAs. He is trying to ride two horses- on the one hand, he says he needs time...

Senior Advocate Mukul Rohatgi, appearing for the 10 rebel MLAs, started by saying that the stance taken by the Speaker in a presser on Thursday evening and the statements in his application moved in the top court were 'contradictory'

"He gave mixed signals in the press conference after bis meeting with the MLAs. He is trying to ride two horses- on the one hand, he says he needs time to examine the resignations, on the other, he questions the Supreme Court's power to issue orders to him"

"He says he requires to time to go through the resignation letters? But they are one-liners. How long could it take him to read them? Why did he not decide on the resignations as directed by this court yesterday? He should be held for contempt! He can be allowed one or two days for this task, but until then, the MLAs cannot be disqualified", Rohatgi submitted.

"How are the resignations in anyway connected to the Speaker's power that he wields within the Assembly? Now the Karnataka government has ordered the MLAs to attend the House today and vote on the budget. If they are not found to be in favour of the whip, they shall be punished with disqualification and the resignations become infructuous. This is why the resignations have been kept pending", he alleged.

Countering this argument, Senior Counsel Abhishek Manu Singhvi, for the Speaker, advanced, "The MLAs are anyway liable to be disqualified under the anti-defection law. This has to be decided by the Speaker prior to their resignations"

"The purpose of the resignations is to circumvent disqualification. 2 of them resigned after the disqualification proceedings were initiated and the remaining had done so beforehand but they did not meet the Speaker personally. When they had arrived to meet the Speaker yesterday, it was accepted by them on video that they had never actually tried to appear before the Speaker in person. The MLAs had no prior appointment. They came in at 2: 30 PM when the Speaker had already left at 12:45. And they never contacted him after that", in response to the other side's claim that the Speaker has the "habit of making himself scarce" and "absconds" when they approach him with their resignations. Dr. Singhvi called this an attempt to "malign" and "lampoon" the Speaker.

"Are you challenging our power to issue directions to the Speaker? Are you saying that we should stay our hands so far as the Speaker is concerned? You are suggesting that he is duty-bound to decide on the disqualification prior to their resignations?" demanded Chief Justice Ranjan Gogoi.

Dr. Singhvi proceeded to clarify that the Speaker does not deem himself over and above the Supreme Court, and had in no way conveyed that the apex court "go to hell".

"But Your Lordships have to protect me also. The Speaker is a senior member of the Assembly and knows the Constitutional law. His argument is more nuanced. All that he is saying is that under Article 190(3)(b), he is entitled to check if the resignations are voluntary and bonafide, and to turn them down if found otherwise. An inquiry has to be undertaken to this end and it is for the Speaker to see what is required for it. The Amendment in 1974 makes this clear...If tomorrow they (the BJP) is to form its government, they would invite these rebels to become ministers...Anyway, this petition under Article 32 is not the correct recourse as there is no infringement of any Fundamental Rights here", Dr. Singhvi submitted.

In his turn, Senior Advocate Rajeev Dhawan, on behalf of Chief Minister H. D. Kumaraswamy, reiterated this contention of the petition not being maintainable, there being no violation of Part III rights.

"The petition is overtly political. Your Lordships were drawn into the political thicket and made to pass yesterday's orders on the basis of an inaccurate representation of facts. It has been argued that resignation is not the same as disqualification? I agree. They do not wish to be disqualified! Allegations of scams, maladministration in the state, the working of the government coming to a halt were levelled, but some of these rebel MLAs are themselves involved in the scams...there wasn't enough justification for this court to step in.They are claiming urgency because the state government is in minority? That the CM has lost numbers and the Speaker is behaving in a malafide manner? They came to the court saying that the government has failed so help us fail it further? They say the Speaker has abandoned his constitutional duty? What, as per these MLAs, is his duty? To be a post-office?"

"The Speaker was performing his constitutional duty in examining if the resignations are in good faith. It is a procedure under the Tenth Schedule, beyond the purview of the House. The Speaker has said he shall decide the resignations at the earliest...I know of only one such case where the Speaker was assigned a deadline to decide on the resignations, but in that instance in Haryana, the facts and circumstances were very different... The decision in Kihoto Hollohan clearly stipulates that this court can only review the Speaker's call, after he has taken it. But the court cannot dictate a deadline or how the Speaker should go about it...", suggested Dr. Dhawan.

The CJI-led bench observed that the matter involved substantial questions of law requiring deep consideration. So the hearing was adjourned to next Tuesday and status quo was directed to be maintained with respect to resignations of the rebel MLAs and the disqualification proceedings against them.