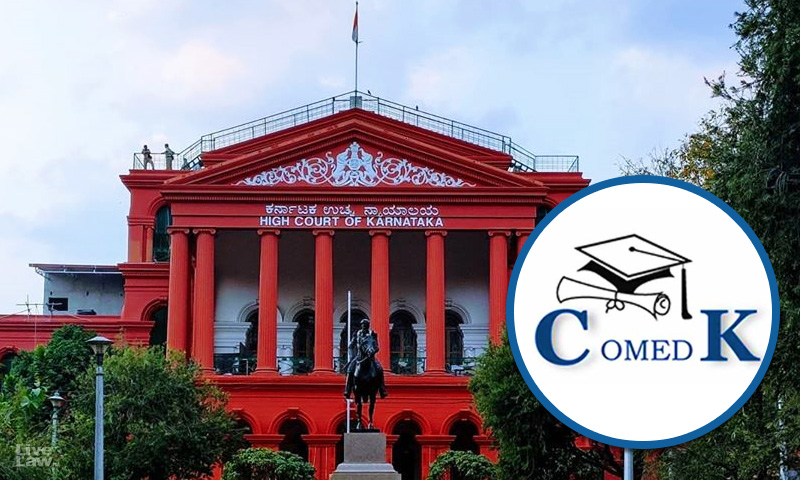 The High Court of Karnataka on Thursday refused to postpone the COMEDK test scheduled to be conducted by Consortium of Medical, Engineering and Dental Colleges of Karnataka (COMEDK) on August 19.The Court dismissed a PIL filed by Advocate Abdulla Mannan Khan, which voiced the apprehension that conduct of the test would expose students to the risk of COVID-19.While giving a go-ahead to COMEDK,...

The High Court of Karnataka on Thursday refused to postpone the COMEDK test scheduled to be conducted by Consortium of Medical, Engineering and Dental Colleges of Karnataka (COMEDK) on August 19.

The Court dismissed a PIL filed by Advocate Abdulla Mannan Khan, which voiced the apprehension that conduct of the test would expose students to the risk of COVID-19.

While giving a go-ahead to COMEDK, the Court directed the authorities to take all precautions for the safe conduct of the exam.

The bench of Justices BV Nagarathna and Ravi Hosmani observed in the as follows:

"At the outset we find that there is a delay in the examination being conducted. In normal times the exam would have been conducted in April-May.

State Government has conducted SSLC exam and KCET. It is on that basis that COMEDK, which is a consortium of private professional colleges, has decided to conduct the exam on August 19.

This court in its order of July 29 has also taken note of SOP that was made available for the conduct of said exams (KCET) and thereafter rejected the interim prayer to stay KCET".

"It is no doubt that the pandemic has affected everybody not only in this country but world over. But at the same time with the passage of time Central/state govt as well as citizens have now got accustomed to carry on with life/administration etc, by taking all precautions it is in that light that we have to view the conduct of examinations for entrance test for various professional colleges or such other entrance test".

The Court recorded that COMEDK exam is being conducted across India in 342 centres for 20,000 seats and seven universities.

At the beginning of the hearing, the bench of Justices BV Nagarathna and Ravi Hosmani pointed out that no student has approached the HC seeking the cancellation of the test, and asked why an advocate has filed the petition.

"Why do advocates become parties. Ask the students to become petitioners and you become their Advocate", the bench told the petitioner.

The bench also pointed out that the Court has already permitted the State Government to conduct the Karnataka Common Entrance Test on July 30.

"If we stay this exam the candidates will suffer", the bench remarked.

The counsel for the COMEDK submitted that exam was sought to be stayed at the instance of about ten students and that the case was not in "public interest" but was only a "publicity stunt".  He told the bench that Tata Consultancy was conducting the exam and they are best in following all the safety guidelines. Test is only conducted for 119 professional private colleges, with 20,000 seats, he submitted.

The PIL stated that around 70,000-80,000 students will be writing the exams, and the decision to hold the test on August 19 will result in putting the students to the grave danger of COVID19.

It is stated that "there is no immediate urgency to conduct the COMEDK 2020 as it will not have any effect on the students' academic future."

"India is raging with the pandemic situation of COVID 19 having cases almost 21,70,688 cumulatively with an addition of almost forty thousand cases per day,Karnataka alone having 1,78,087cases with Almost 3198 deaths and with daily addition of almost 4000 new cases", states the petition.

COMEDK has 300 Centres spread all over India, with students appearing for the examination from various States.

The petitioner alleges that there were lapses in maintaining social distancing during the recently.held KCET exam. It is also pointed out that the National testing agency has already postponed the national level entrance tests like JEE, NEET, AIBE, CLAT owing to the dreadful COVID-19 prevailing in the country,

"It is submitted that Article 21 of the Constitution of India ensure one's right to life which also includes to protect one self, and also government itself if asking the individuals to stay home unless it is very important and this COMEDK is a Manufactured Event for the Student to them in a havoc", the plea states.