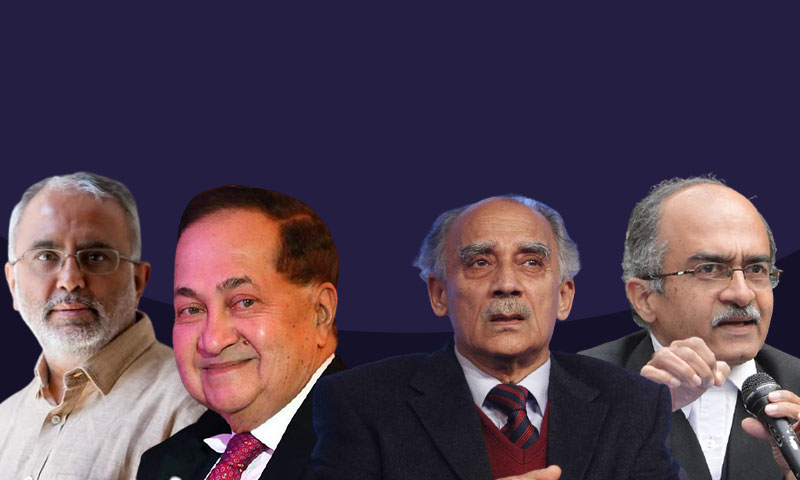 The Karnataka High Court on Tuesday issued notice on a petition challenging the constitutional validity of Section 2(c)(i) of the Contempt of Courts Act, 1971, which criminalises publication of such matter that may "scandalize the courts". A Bench led by Chief Justice Abhay S. Okay has issued notice to the Central Government on the petition filed by journalists Krishna Prasad and N....

The Karnataka High Court on Tuesday issued notice on a petition challenging the constitutional validity of Section 2(c)(i) of the Contempt of Courts Act, 1971, which criminalises publication of such matter that may "scandalize the courts".

A Bench led by Chief Justice Abhay S. Okay has issued notice to the Central Government on the petition filed by journalists Krishna Prasad and N. Ram, former Union Minister Arun Shourie and Advocate Prashant Bhushan. The matter is likely to be listed next on 22 February.

Section 2(c)(i) defines criminal contempt as publication or doing of any act that "scandalises or tends to scandalise, or lowers or tends to lower the authority of, any court".

The petitioners have challenged the provision on the ground that it violates Article 19 and 14 of the Constitution, is incurably vague and is manifestly arbitrary.

Fails the Test of Overbreadth

It is submitted that the impugned sub-section has an extremely wide import and thus, fails the test of "overbreadth". The plea states,

"It is settled law that any legislation having the effect of restricting the right to free speech and expression on any of the grounds enumerated in Article 19(2) must be couched in the narrowest possible terms and cannot cast a "wide net". It is liable to be struck down as overbroad if it does so."

The Petitioners have cited instances such as initiation of contempt proceedings against a traffic constable for merely interrogating whether the red beacon on the hood of a judge's car was authorised, to illustrate that,

Criminalises Speech in the absence of Proximate & Tangible Harm

The Petitioners have submitted that the impugned provision restricts speech on the basis of "tendency" to scandalise or lower the authority of the courts.

"This is constitutionally impermissible in the absence of some evidence or connection which removes alters the harm from a purely speculative one to a real, proximate and likely one...Right to free speech and expression cannot be abridged on the basis of a mere speculation of harm. Nor can the right to free speech be restricted in the absence of real and proximate harm," the plea states. Reliance is placed on S. Rangarajan v. P. Jagjivan Ram (1989) 2 SCC 574.

It is averred that until an injury to sentiments crystallises into a likelihood of tangible and material harm, the speech remains protected by Article 19(1)(a) and criminalisation of such speech remains incapable of amounting to a reasonable restriction under Article 19(2).

It is submitted that whereas the Supreme Court has time and again held that the judiciary as an institution must be open to public criticism, the overbreadth of the words of the provision and the resulting reality of its inconsistent application has the effect of threatening dissenters and critics into silence on pain of criminal penalty.

"This has a chilling effect on free speech and expression, and silences legitimate criticism and dissent to the detriment of the health of the democracy," the Petitioners contend.

"The threat of criminal penalty associated with the offence of scandalising the court places a real and immediate burden on the exercise of the free speech right. It demonstrably deters the airing of critical viewpoints by members of the general public, creates serious disincentives to journalism about the judiciary and so impoverishes the public sphere."

The Petitioners have pointed out that the impugned sub-section was introduced in 1971, and was not contemplated as a ground for restriction under Article 19(2) during the adoption of the Constitution. It is contended,

"The meaning of "contempt of court" under Article 19(2) cannot post-facto be extended by legislation to include "scandalising the court".

It would be wholly unconstitutional to allow legislation to expand the scope of restrictions at the cost of the breadth and vigour of the fundamental right that they curtail."

Fails the Test of Proportionality

The test of proportionality consists of the following prongs:

Firstly, the Petitioners contend that the aim of the impugned subsection is to "immunise courts" from criticism and to maintain public confidence in the courts by this route, rather than leaving confidence to follow from the manner which courts' functions are discharged.

This is alleged to be against the first prong in the test of proportionality, i.e. existence of a legitimate state aim.

Secondly, it is stated that the provision breaches the rationality prong, as there is often only a tenuous nexus between the restriction on free speech and the end that is sought to be achieved.

Next, it is averred that impugned breaches the necessity prong inasmuch as Sections 2(c)(ii) and 2(c)(iii) are "less intrusive measures" and under which all genuine offences of criminal contempt can be effectively dealt with and the capacity of the courts to function can be preserved.

Lastly, it is stated that the impugned provision is disproportionate to the aim that the Contempt of Courts Act sought to achieve, namely, to balance the fundamental right to free speech and expression with the status and dignity of courts and interests of the administration of justice.