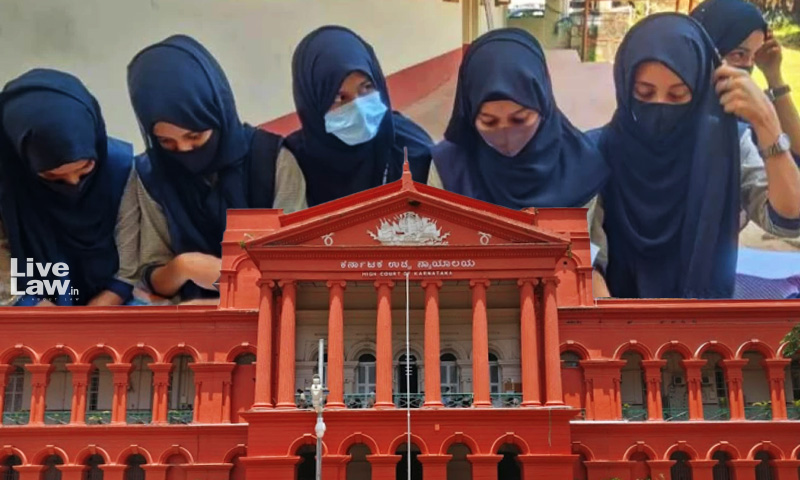 The Full Bench of the Karnataka High Court which is hearing the hijab case on Tuesday rejected an affidavit which alleged that the interim order passed by the Court on February 10 was being misused by authorities to stop hijab-wearing students even in institutions with no prescribed uniform.The Bench rejected the affidavit sworn to by Advocate Mohammad Tahir by saying that a counsel cannot...

The Full Bench of the Karnataka High Court which is hearing the hijab case on Tuesday rejected an affidavit which alleged that the interim order passed by the Court on February 10 was being misused by authorities to stop hijab-wearing students even in institutions with no prescribed uniform.

The Bench rejected the affidavit sworn to by Advocate Mohammad Tahir by saying that a counsel cannot file an affidavit and that the same has to be sworn to by the party.

The Bench comprising Chief Justice Ritu Raj Awasthi, Justice Krishna S Dixit and Justice J M Khazi rejected the affidavit saying, "This is not the correct practice. A lawyer cannot swear to an affidavit. It has to be sworn by the party. We cannot allow this malpractice"

The affidavit pointed out that the Court had confined the application of the interim order of February 10 - which restrained students from wearing any sort of religious dress in class rooms regardless of their faith - only to those institutions which have prescribed a uniform. However, it was being applied in other institutions as well. Even hijab-wearing students in an Urdu college were stopped, Tahir alleged. He said that he has annexed the relevant media reports.

Senior Advocate Professor Ravivarma Kumar, the arguing counsel appearing for the petitioner, mentioned that since colleges are reopening from Wednesday, the application filed by him seeking to clarify the interim order should be considered.

Advocate General Prabhuling K Navadgi objected. He said, "The application is defective. It does not have a verifying affidavit from the party. It is made by the counsel on record based on his own knowledge."

Advocate Tahir  relied on the Karnataka Civil Rules of Practice 1967 to say that an advocate representing the petitioners can file the sworn affidavit. Further, he said the petitioners are in Udupi district and it is very difficult for them to come to Bengaluru and file the affidavit.

He added, "Memorandum of facts can be furnished under the Karnataka Civil Rules of Practice".  To which Navadgi said, "Under the Rule, if milords are to examine it, memorandum of facts can be sworn in by the counsel only in respect of matters which are on record. These are all serious allegations made." The Advocate General added that the State can only respond to a proper application and cannot respond to a "vague affidavit".

Following this, the bench rejected the affidavit as improper.

Chief Justice: This is not correct practice. A lawyer cannot swear an affidavit. It has to be sworn by the party.

Tahir : But the civil rules permit it.

CJ : The Affidavit filed by advocate is rejected. We will continue hearing tomorrow.#HijabRow #KarnatakaHighCourt

Tahir alleged in the affidavit that the State is enforcing this order even in those educational institution which are managed by the Muslim management and where 100 percent students are Muslim.

The affidavit states "Minor Muslim girls are forced to remove their headscarf on the road, their videos are made and circulated in the social media and to humiliate entire Muslim community."

The affidavit relies on media reports and said, "Government officials are going into Government Urdu schools and forcing students and teachers to remove hijab, which is not only humiliating but insulting as well."

Further it is said, "The conduct of government officials are creating disharmony and division between the communities and the same will disturb the peaceful environment of the entire nation."

The affidavit prayed for directions to the state to not illegally enforce the interim order beyond the jurisdiction of those educational institutions where college development committees headed by respective Member of Legislative are existing and they have not prescribed any uniform excluding headscarf prior to January 1.

The Bench will continue the hearing tomorrow at 2.30 PM. Report about today's hearing :