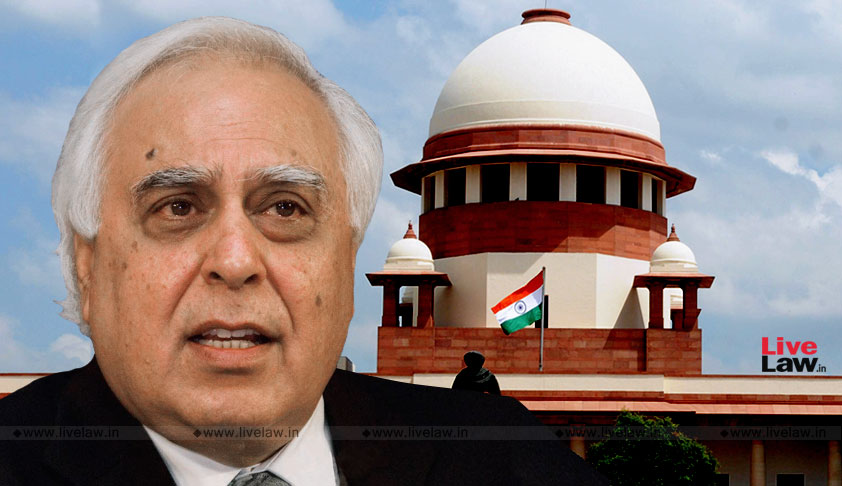 On the final day of hearing in the Karnataka MLAs disqualification case, Senior Advocate Kapil Sibal argued for the erstwhile Speaker of the Karnataka Legislative Assembly."What goes on inside the House is the business of the Speaker. Your Lordships may not look into it...if these MLAs are now permitted to contest the elections, then the entire exercise would be futile. What would be the...

On the final day of hearing in the Karnataka MLAs disqualification case, Senior Advocate Kapil Sibal argued for the erstwhile Speaker of the Karnataka Legislative Assembly.

"What goes on inside the House is the business of the Speaker. Your Lordships may not look into it...if these MLAs are now permitted to contest the elections, then the entire exercise would be futile. What would be the meaning of all this then? It would encourage this kind of behaviour if those who are disqualified are later allowed to participate in the fresh elections...", began Sibal.

It was his case that constitutionally, the subjects of disqualification and elections are to be segregated, that the elections cannot be postponed merely because the disqualified MLAs also wish to fight the elections.

"All of a sudden, 11 MLAs decide to hand in their resignations. This would cause any Speaker to wonder what could be the reason behind a group of 11 suddenly resigning...And then they approach the Governor to request the Speaker to decide on their resignations? Why would anyone go to the Governor for this?...You resign immediately before a floor test and insist that you should be allowed to do so? This would be a subversion of the system", he continued.

"But can the Speaker seek to safeguard the interests of the government?", inquired Justice N. V. Ramana.

"Should the Speaker not act in a neutral manner?", asked Justice Sanjiv Khanna.

"There are two stages in the act of resigning- tendering the written resignation, and its acceptance by the Speaker. But the constitutional scheme does not envisage these two to take place simultaneously. The Speaker does not have to agree to the resignation immediately. He has the right to examine any information that he may have regarding the resignation, whether this information pertains to events prior to or subsequent to the act of resigning...", advanced Mr. Sibal.

He negated the argument on the other side that the motive, which supposedly inspired the resignations, was irrelevant and hence, the events subsequent to the act of resigning, such as flying to Mumbai in a chartered plane owned by a BJP MP and camping there in a hotel in the company of BJP leaders, were of no consequence- "

"How would you determine whether the resignation is genuine if you overlook the motive behind it? Motive and genuineness are connected by an umbilical cord. A resignation by virtue of which one's spot in the House is surrendered is genuine, not one which is handed in with the motive of crossing over to another party to become a minister"

"Their party called a meeting. They were told consequences would follow if they failed to attend it. But they chose to ignore all this and just left for Mumbai? Didn't they know they have a constituency that elected them and which they are answerable to? Should the Speaker not consider all this?"

'What would happen if a member sought to resign on account of some corrupt practices prevalent in the party that he wanted to distance himself from?", Justice Ramana wanted to know.

"What if he didn't agree with some law that the government sought to introduce? Would he have to give up politics altogether?", added Justice Khanna.

Suggesting that no politician would ever resign on these grounds, Mr. Sibal pleaded with the judges to not lose sight of the reality.

"This is politics. Here, nothing is hidden. Everybody knows who is going where and what is happening...It is not that resignations should be disallowed completely. But the Speaker is entitled to conduct an inquiry into their voluntariness and genuineness...", he repeated.

Stressing that what has transpired in Karnataka is a constitutional sin and that the matter in hand raised serious questions, questions which are without precedent, and the repercussions of which would percolate to the polity of the nation, he urged the bench to refer the issue to a larger bench.

In his turn, Senior Counsel Rakesh Dwivedi, appearing for the Election Commission, submitted that the Tenth Schedule deems the Speaker's jurisdiction as concluded once he has recorded a decision as to the disqualification.

"It is for the Commission to see if the disqualification is only for being a member of the House or even for being chosen as one...A person would be allowed to contest fresh elections unless there is an express restraint", he said.