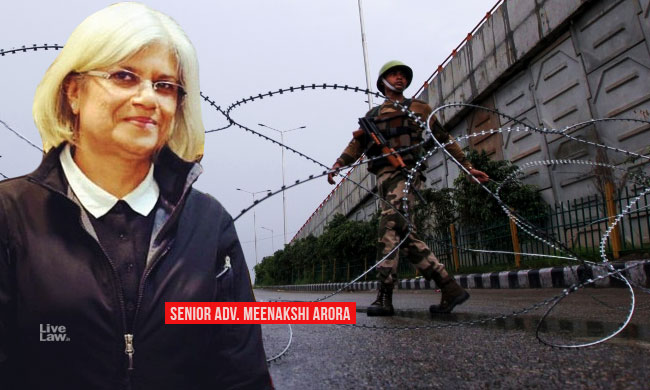 On Thursday, hearing in matters related to the communication lockdown in Jammu & Kashmir resumed today before the 3-judge bench of the Supreme Court, comprising of Justices NV Ramana, Subhash Reddy and BR Gavai. The bench initially commented that the Government, through Solicitor General Tushar Mehta, was not giving the impression that the matter was being given proper attention....

On Thursday, hearing in matters related to the communication lockdown in Jammu & Kashmir resumed today before the 3-judge bench of the Supreme Court, comprising of Justices NV Ramana, Subhash Reddy and BR Gavai.

The bench initially commented that the Government, through Solicitor General Tushar Mehta, was not giving the impression that the matter was being given proper attention. Mehta responded by saying that the facts that have been presented were incorrect, and that they would counter every point.

Senior Advocate Meenakshi Arora, representing Tehseen Poonawalla who has intervened in the petition filed by Kashmir Times Editor Anuradha Bhasin, then resumed her arguments to state that promulgation of an order is necessary for it to take effect. She submitted that communication channels had been cut off since August 4, when there was nothing 'out of the ordinary' . Those who passed orders on Aug 4 were not aware of what was going to happen on Aug 5, and since it is the magistrate who can pass orders under Section 144, it appears there could have been some direction from the state to that effect, she added.

Solicitor General Tushar Mehta objected to this and stated that this was not a public forum to say such things, and as an intervenor, not petitioner, she must stick to what's in the pleadings, which had no mention of the same.

Arora then argued that criticism of government policies should not be suppressed and views, be it good bad or ugly, must be allowed in democracy. People had the right to say if they supported the move or not, she added, saying Article 19(2) can be used to restrict freedom of speech only if there's a necessity. Refering to a judgment in Om Kumar v Union of India, on proportionality, it was submitted that those considered dangerous could have had restrictions imposed on them, not an entire state. The burden of proof was on the state which must show not only rationality, but also proportionality.

She then cited Justice Subbarao's dissent from the Kharak Singh case to buttress her argument that physical restrictions are a problem, but psychological restrictions also affect civil liberties. The actions of the government created fear, and fear makes a citizen inert; democracy cannot afford inert citizens, she asserted.

Arora also drew an analogy with the Hong Kong High Court's ruling which held banning of masks as unconstitutional to say the situation there is much worse, yet protests were peaceful and the test of proportionality was applied.

On the mention of the Hong Kong case, Justice Gavai asked what was the need for referring to foreign decisions.

Justice Ramana added that the Indian Courts have a rich history of upholding rights.

Then senior advocate Sanjay Hegde appeared for Aleem Syed, a law student whose parents live in Kashmir. Syed was allowed by the Supreme Court to visit Kashmir, and upon his return he submitted an affidavit in a sealed cover as he feared to make his report public. Hegde urged the court to consider his affidavit. He concluded by quoting Lord Atkin- "In times of war and peace, laws are not silent".

Solicitor General Tushar Mehta then continued arguments for the rest of the day (Separate report on it will be published).