[Kashmir] Restrictions On Article 19 Can Be Imposed By A Law Not By Executive Action: Kapil Sibal 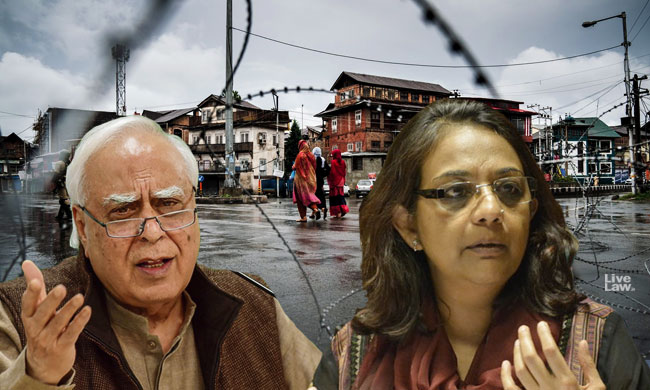 A Three Judge Bench headed by Justice Ramana on Thursday resumed the hearing on Petition filed by Kashmir Times Editor Anuradha Bhasin against the communication blockade in Jammu and KashmirAppearing on behalf of the petitioner Senior Advocate Kapil Sibal trashed the imposition of section 144, Cr. P. C. in Kashmir.Referring to the stand taken by the State Government in the Supreme Court,...

Appearing on behalf of the petitioner Senior Advocate Kapil Sibal trashed the imposition of section 144, Cr. P. C. in Kashmir.

Referring to the stand taken by the State Government in the Supreme Court, he suggested that the same was effected as a "preventive measure" in view of "serious apprehensions of law and order" "in the light of important constitutional changes brought about in J & K".

He pointed out that the government has itself stated in tis affidavit that "the vast majority of people in the state are peace-loving".

"Their Fundamental Right need to be protected...restrictions should only be imposed on the trouble-makers!...children have not been able to go to school since then....landlines have been blocked...internet has been totally blocked...banning social media is understandable but why the internet? It is.only communication between two people", he said.

"Can you direct under 144 that one shall not speak? No! I can speak to my family members! I can speak to my neighbours! False news is to be checked, but there is no explanation for blocking landlines and the internet altogether...post-paid mobiles are working but prepaid are still not. (Subscribers of post-paid phones) have still had to pay fixed charges for the month of August and September when they didn't use the phone...How does this impact public order? They never thought of any of this and took a knee-jerk decision to impose 144!", he continued.

"If I want a medical facility and my phone doesn't work, how do I go to the hospital? How do I phone the doctors? Or ambulance? How do I reach the bank? How do I transfer money?", he asked.

"You can't totally prohibit freedom of expression and free movement! It is not envisaged under 19(2)...You can only restrict it!"

Mr. Sibal also questioned the state's assertion that most of these restrictions were lifted in September-

"How do we know that this statement is correct? Nobody can go there...there are no independent agencies..."

"They said that the orders can be produced before this court...now they are saying, 'We are not going to show it. But you can see it'"

"We have directly asked, but they have not produced...144 itself says that the order must based be passed on the basis of material which must reflect in the order. 144(6) says we can challenge the order. But how do we do that where there is no material before us?"

"They didn't wait for anything to happen! They just assumed that the 'peace-loving' people of Kashmir would not react peacefully!", he argued.

"Restrictions on Article can be imposed only by a law and not any executive action. The law here is the Telegraph Act and the Rules framed under it"

The bench noted that instead of going to the service provider and seizing the licensee, as section 5(1) of the Telegraph Act envisages in the event of a public emergency or in the interest of public safety, the government has alternatively directed the detention and blocked the transmission of messages under section 5(2).

"5(2) speaks of messages between a class of persons or pertaining to particular subject! This order is not even under 5(2) There could not have been a complete black-out, a blanket order! This is ex-facie a violation of 19(2)....The only window the government has under 19(2) is circumscribed by 5(2)", insisted Mr. Sibal.

"This is like saying I will not be allowed to talk with anybody...this is what is meant by blocking landlines! forget, landlines, emails also cannot be used! Emails are between 2 people. How are they affecting public order? You are blocking information!"

"What all should be permissibly blocked as per you?", the bench wanted to know.

"All forms of social media- WhatsApp, Facebook, Instagram. These are tools of mass communication which can be used for rumour-mongering, to spread fake news, to incite people", replied the Senior Advocate.

"This can be done through landline also, through telecommunication. Can't you phone 100 people?", asked the bench.

"I can...say, to tell people that my mother has died...but they cannot come out of their houses because of 144...Your Lordships must distinguish between mass communication and the potential for disturbance...if I LIVE IN A NEIGHBOURHOOD, our HOUSE IS JOINED, WALLS ARE CONNECTED, THERE ARE STAIRS, I can still speak to 100 people", responded Mr. Sibal.

"Somebody may suffer, but we have to look at the bigger picture and balance interest", observed the bench.

"A man is doing business on the internet. He has a contract. He can't send an email. He can't honour the contract. He has loans, which he is unable to pay. Interest accumulates. It becomes a NPA...it may be a minor thing according to some, but his life is destroyed!", illustrated Mr. Sibal.

"They should have applied their minds and put a system in place before AUGUST 4 so that children can go to school without danger...they should have ensured that there is public transport...since the imposition of 144, nobody has dies except for one incident. That means people have not come out...there are Central government employees in the state, employees of CAG. They love far from their offices. They don't have any transport, particularly the lower grades. How should they go? It is a 3-4 hour long walk and there is danger to life...the state should do this under 19"

"NO PUBLIC MOVEMENT MEANS YOU CANNOT GO OUT OF THE HOUSE?", ASKED THE BENCH.

"Yes. let them put it on affidavit. Why was I stopped at the airport if public movement is allowed? Ask them if they have given prior permission to anyone?"

"You are talking of curfew", noted the bench- "Effectively, it is that!", urged Mr. Sibal.

He relied on a 1942 full bench judgment of the Lahore High Court to show that for an order under section 144, there must be a casual connection between the act prohibited and the danger apprehended and the need to indicate the material facts which justify the order.