Kashmir : Why Block Internet As A Whole To Control Social Media, Asks Sibal 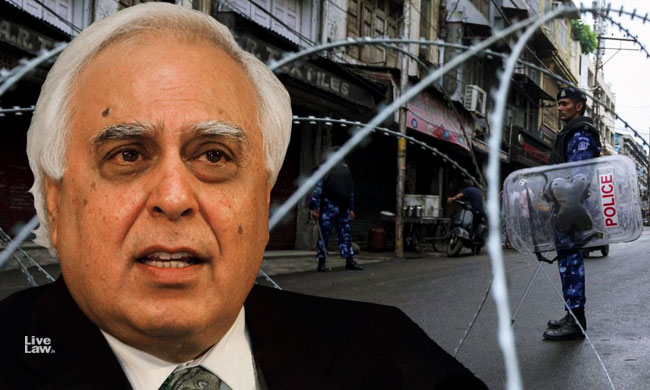 After Solicitor General Tushar Mehta concluded arguments in the hearing of Kashmir petitions, some of the intervenors supporting the restrictions made their submissions before the bench comprising Jusices N V Ramana, Subhash Reddy and B R Gavai. This was followed by Advocate Vrinda Grover's rejoinder, on behalf of Anuradha Bhasin, the editor of Kashmir Times. She submitted that the...

After Solicitor General Tushar Mehta concluded arguments in the hearing of Kashmir petitions, some of the intervenors supporting the restrictions made their submissions before the bench comprising Jusices N V Ramana, Subhash Reddy and B R Gavai.

This was followed by Advocate Vrinda Grover's rejoinder, on behalf of Anuradha Bhasin, the editor of Kashmir Times. She submitted that the paper's Srinagar edition was being published since October 11, though in a truncated manner. When asked if it was still being published from Jammu, Grover corrected the bench and said she had submitted on record that there was a media facilitation centre and she had been publishing from Srinagar, and anything else was a misrepresentation. The bench asked why she had not brought those developments to their notice. Grover clarifed again that she had put everything on record and had not hidden anything.

Grover @vrindagrover - No, Srinagar edition! I've placed on record about media facilitation centre in affidavit. I've submitted the restrictions, including on free movement despite press card, on affidavit.#Kashmir

Senior Advocate Kapil Sibal then commenced his arguments on behalf of Congress Rajya Sabha MP Ghulam Nabi Azad. He submitted that the centre had only given a few orders to the Petitioners, while refusing to give others. "Blanket statements have been made...Relevant material must be placed at least...I'm handicapped before the State in such a case", he stated.

If their interpretation of Art 19 is taken, it will lead to a situation worse than ADM Jabalpur, he submitted.

"When there is an election somewhere, government will impose S. 144". He argued that Article 19 needs to be an act of balancing. "Why were children not allowed to go to school? They say 98% attended exams, what other choice do they have? Why were the sick not allowed to go to hospital. Surely national security cannot be an answer to that", maintained the senior advocate.

He went on to question why internet on the whole was banned, why transport was banned. "I understand if social media needs to be blocked, but not all of the internet...Block social media, I said that on the first day itself. But businesses run on internet." He further quoted the SG to say the people there were peaceful, and asked why would peaceful people not be allowed to come out. "I'd understand if Art 352 was in play".

He then tore into the State's rebuttal of allegations that Ayushman Bharat not reaching the poor. "The data I gave through IndiaSpends was countered as fake by citing OpIndia", which according to Wikipedia is a right wing propaganda organization stated Sibal. He also mentioned that OpIndia was denied the status of a certified fact checker because it was partisan. "They cite that instead of a doctor's statement regarding Ayushman Bharat", he added.

Sibal : OpIndia @OpIndia_com was denied the status of a certified fact checker due to being partisan. They(Government) cite that instead of a doctor's statement regarding Ayushman Bharat@KapilSibal for Ghulam Nabi Azad @ghulamnazad #Kashmir

Sibal then cited articles from 'respected' and reputed national dailies to say they were the only sources through which people were getting to know the situation and facts in Kashmir. Using these articles to show that businesses, farmers, schools, tourism/travel agencies have suffered, Sibal submitted there needs to be a reasonable balance that needs to be struck, even if there's a situation which warrants Sec 144. "They say schools are open, but which parent will send them without security and the state isn't providing security", he asserted.

"The SG cites national security and says no judicial review possible, that's it...there cannot be any law where you can paralyse 7 million people. There can't be such a law."

The day's hearing concluded while Sibal was addressing the rebuttals of the State with regard to procurement of apples, to state that that wasn't the only crop in question.