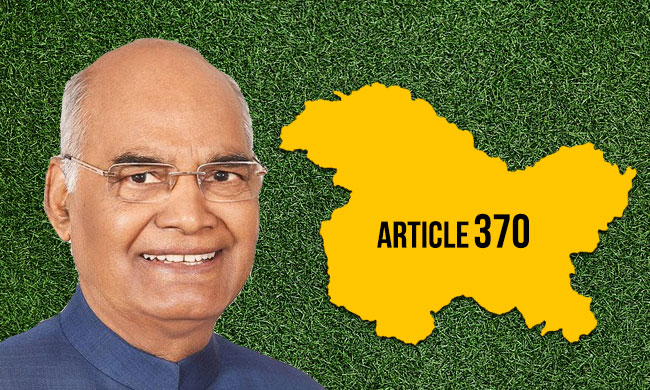 Challenging the Presidential Order issued on August 5 under Article 370 of the Constitution, Shakir Shabir, a lawyer from Kashmir, has filed a writ petition in the Supreme Court.

The order issued under Article 370(1) of the Constitution by President Ram Nath Kovind paved way for the application of entire provisions of the Indian Constitution to Jammu and Kashmir, taking away its special status in effect.

The President's Order also had the effect of nullifying Article 35A of the Constitution, as it superseded the Presidential Order of 1954. Further, it made a change in the interpretation clauses in Article 367 to state that 'Constituent Assembly' will read as 'Legislative Assembly of the State' and 'Sadar-i-Riyazat' as 'Governor'. Drawing power from these changes, the President later issued another order on August 7, modifying Article 370 to completely abrogate the special status of J&K.

The petitioner contends that actions taken by the Central Government are arbitrary, reckless and without any constitutional authority.

The President could not have invoked the powers under Article 370(1) to dilute the very same article, argues the petitioner.

"Article 370(1)(d) of the Constitution empowers the President to provide for the application of "such other provisions" of the Indian Constitution, with modifications he decides, as he specifies through the order. The use of the term "other" in the phraseology of Article 370(1) clearly indicates that the word "other" has been intended by the makers of the Constitution to mean provisions other than Articles 1, 238 and 370, which are the only provisions that have been expressly referred to in that Article. Therefore, a better perusal of Article 370 would go on to indicate that the order issued by the President was without any authority by changing the use of the words in Article 370 since the same could have been achieved only by way of an amendment by the Parliament", states the petition seeking the quashing of the August 5 Presidential Order as 'void ab initio' and 'ultra vires' the Constitution.

The petition makes reference to the SC decision in State Bank of India v Santhosh Gupta (2017) 2 SCC 538, which reiterated that Article 370 can be held to be inoperative by the President only on the basis of recommendation by the Constituent Assembly of the State. Since the Constituent Assembly has been dissolved, Article 370 has come to attain a permanent status, though in its margin it is described as 'temporary, transitional provision', observed the SC in that case.

The notification was issued without taking the elected representatives of the State into confidence, and is hence a "unilateral decision". The consent of the Governor of the State has no meaning, as he is an appointee of the Centre, the petition further states.

The petition adds that Kashmir has been put under a siege with unreasonable restrictions being placed on the peoples' freedom of speech, expression, information, movement etc.  It was issued with "utter disregard for human rights, life and liberty of millions of citizens, casting doubt on the very fundamentals our nations stands for".

"The actions of the respondents by passing C.O 272 of 2019 dated 05.8.2019 caused a trauma to millions of aggrieved citizens, which as history behold, will result in  the acts of mob violence and deaths of tens of thousands of innocent citizens of the state", the petition states.

The Parliament has also passed the Jammu and Kashmir Reorganization Bill 2019 to bifurcate the state into Union Territories of J&K and Ladakh.

On the next day of issuance of the Presidential Order, a petition in SC was filed by Advocate M L Sharma challenging it.  Though he had made a mention for urgent listing of the petition yesterday, the Court declined.