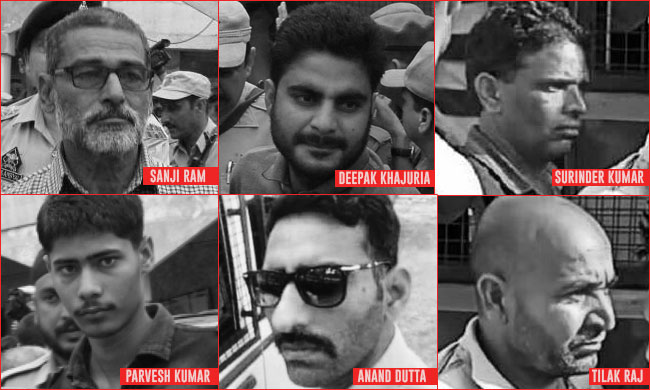 The District and Sessions Judge Pathankot Tejwinder Singh has pronounced sentence in the ghastly crime relating to gang rape and murder of an eight year old in Kathua, Jammu in January last year.

Sanji Ram, who has been found to be the mastermind of the crime, is the caretaker of the temple where the offence took place.

The seventh accused in the case, Ram's son Vishal, was acquitted by the trial court giving him benefit of doubt on the basis of his plea of alibi that he was giving exam at his college in Muzzafarnagar (UP) on the date of offence.

The prosecution team, comprising lawyers J K Chopra, S S Basra, Harminder Singh and Bhupinder Singh, issued a brief statement, saying they would examine the judgement and may go in for appeal against the sole acquittal.

There is one more accused in the crime - the nephew of Sanji Ram- whose case is pending before the Jammu and Kashmir High Court for determining his plea that he was a minor at the time of incident.

According to the charge sheet, the eight-year-old girl, who was kidnapped on January 10 last year, was allegedly raped in captivity in a small village temple in Kathua district after having been kept sedated for four days before she was bludgeoned to death. The charge sheet said the girl had gone missing while grazing horses. Investigators said the accused juvenile had abducted the girl under the pretext of helping her find her horses. The abduction, rape and killing of the child was part of a carefully planned strategy to remove the minority nomadic community from the area, it said.

The case had a polarizing effect after Hindutva right wing groups came out in support of the accused persons by saying that they were falsely implicated in the rape-murder case of the minor girl belonging to Bakerwal nomadic community. The case had become a bone of contention between the then ruling alliance partners PDP and the BJP after two ministers of the saffron party, Chowdhury Lal Singh and Chander Prakash Ganga, participated in a rally organised by the Hindu Ekta Manch protesting the arrests of accused by waving tricolour.

Some lawyers of the Jammu bar held a violent strike preventing the police from submitting the charge sheet in the crime.

Taking suo moto cognizance of the obstruction by lawyers and the special status enjoyed by accused in the State, the Supreme Court ordered the transfer of trial of the case to Pathankot in the neighboring state of Punjab. Later, the apex court had ordered that the accused in the case should be shifted to Gurdaspur jail in Punjab from Kathua.

The Court had also ordered to provide security to the lawyer of victim's family, Advocate Deepika Singh Rajawat, after she complained that she was receiving threats from several persons for taking up the case.