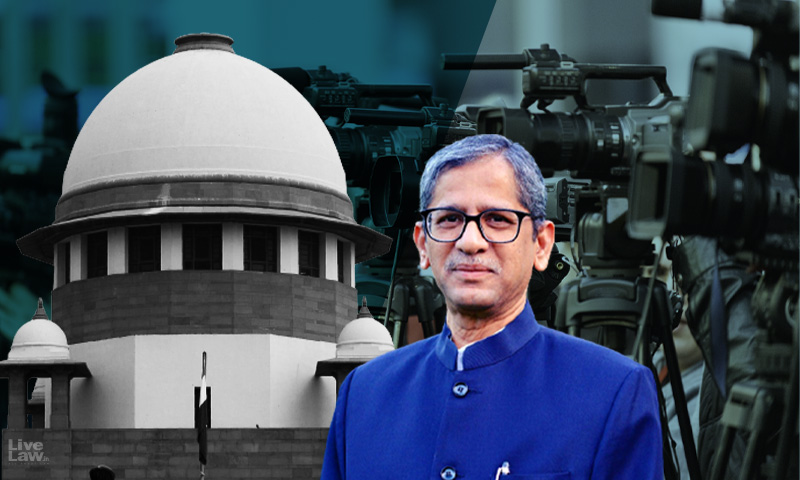 The Chief Justice of India, N. V. Ramana today launched live streaming of Gujarat High Court proceedings and also released the Live Streaming Rules of the High Court. Speaking on the occasion, Chief Justice informed that he is keen to start Live Streaming in at least a few of the Courts at the Supreme Court.

Stressing upon the importance of Live Streaming of Court proceedings, CJI also said that Live streaming is important for the dissemination of information as a part of Article 19 of the Constitution.

"Lack of direct access could give space for misconception and so Live streaming is the best remedy for it. Judges should never shy away from public duty," the CJI said.

"At times, the live streaming mode can become a double-edged sword, however, a judge can't be swayed by popular opinion as Judge might be in the public gaze, he might become a topic of discussion. Judges cannot lose objectivity. The lawyer too should not go for publicity."

He also said that Lawyers should always uphold and maintain the dignity of the profession and the identities of parties also must be kept in mind, their privacy is also important and lawyers have to carefully calibrate rules governing live streaming.

Talking about the importance of Live Streaming, Justice Chandrachud said:

"Whether on not people are interested in a particular case, live streaming adds to transparency. Live Streaming is a necessity now. Even after the pandemic ends, Live streaming would demystify court proceedings for court proceedings and will convey the message that courts are for the people. People get to know that Judges are actually at work. Misconceptions are there regarding Judges' functioning, we are targetted for the Holidays we take."

He further added that Judges are working every single part of the day, it is easy to target judges for the holidays that we have, but people don't understand the immensity of the work that the judges do even when they have time off.

Justice Chandrachud also expressed hope that the initiative started by the Gujarat High Court will surely be replicated by the rest of the country and that it is a progressive state and that he was impressed by the dedication of the High Court towards the nation's service.

Further, speaking on the occasion, Justice Shah said that Live streaming was a dream but it will come true today. He added that CJI is very much interested in timely justice and transparency in the courts' proceedings and that it is in his heart.

"It is a challenge in itself, it required courage, confidence, and above all conviction but I am proud that all my sister brother, and judges approved the Live Streaming rules unanimously."

He also said that as he got a message from Justice Chandrachud, he decided to unanimously start live streaming of court proceedings and that he was proud of the initiative.