Kerala Elephant Tragedy : Plea In SC Seeks To Stop Use Of Snares & Traps Against Wildlife 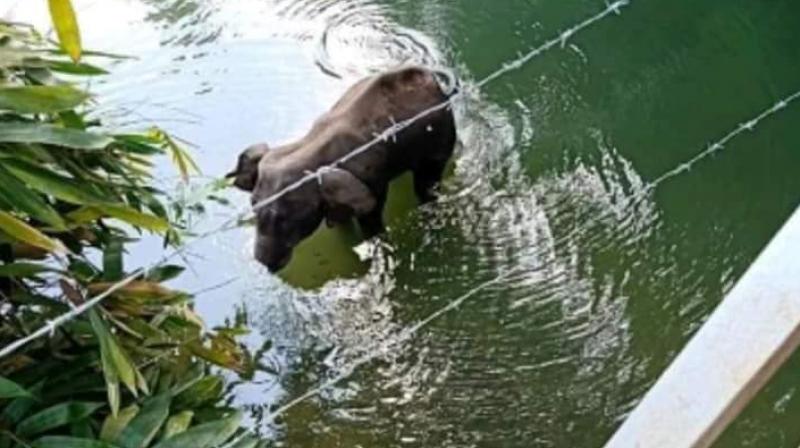 A petition has been filed before the Supreme Court, challenging the practice of using snares and other barbaric means to ward off wild animals in light of the horrific death of a pregnant elephant in Kerala. The plea states that the practices are illegal and unconstitutional, and therefore, seeks for the issuance of guidelines for creation of a Standard Operating Procedure (SOP)...

A petition has been filed before the Supreme Court, challenging the practice of using snares and other barbaric means to ward off wild animals in light of the horrific death of a pregnant elephant in Kerala.

The plea states that the practices are illegal and unconstitutional, and therefore, seeks for the issuance of guidelines for creation of a Standard Operating Procedure (SOP) to tackle such incidents and fulfilling the vacancies in Forest Forces across the States of the Union.

On 27th May, a pregnant elephant succumbed to injuries which were caused due to the eating of a pineapple filled with crackers. The pineapple had been left by the locals to ward off wild boars which tended to stray into their property/fields. The jaws and tongue of the elephant were badly damaged due to the crackers, and as a result of her inability to ingest any food, she died a painful death.

In light of the above incident, the plea, filed by Advocate-on-Record Vivek Narayan Sharma on behalf of Advocate Shubham Awasthi, states the "failure to eliminate de jure (formal) and de facto (substantive) abusive treatment meted out to animals by non-State actors, either directly or indirectly, violates not only the most basic rights of animals, but also violates their basic dignity as a living being as envisaged internationally, in our Constitution, and the guiding principles of every dominant religion or society in India".

The plea further highlights the cruel treatment of elephants in India, which is a far cry from the pride that had been bestowed on them in ancient India.

"No army could be imagined without elephants leading the charge. Celebrated Indian philosopher and royal advisor Chanakya who authored Arthashastra, the ancient Indian political treatise, clearly laid down rules for the King to protect elephants. He said that whoever killed an elephant would be put to death. The pachyderms had to be fed even if they were incapacitated by war, old age or illness, the Arthashastra said."

The plea then delves into the practice of using food filled with crackers to scare off wild animals and squarely places the blame on the Forest Department across India for its failure in protecting Wildlife and Humankind due to severe shortage of staff and lack of scientific measures.

"The Forest Forces in almost every State of India face acute shortages and have to stand in for longer periods of duty due to such shortages. This results in a not so effective monitoring of zones for which they are responsible. Various States need to step up with their Recruitment and Monitoring measures to see the fullest implementation of the Wildlife Protection Act".

The welfare legislation Prevention of Cruelty to Animals Act, the plea submits, has to be construed in a manner bearing the purpose and object of the Act as well as the Directive Principles of State Policy. It also refers to the fundamental duty under Article 51-A(g) and the provisions stipulated under Wildlife Protection Act, 1972 as well as the Elephant Preservation Act, 1879, to drive home the point that such means should not be used by the villagers.

"It is trite law that, in the matters of welfare legislation, the provisions of law should be liberally construed in favour of the weak and infirm. Court also should be vigilant to see that benefits conferred by such remedial and welfare legislations are not defeated by subtle devices".

The plea, therefore, implores the Court to "pierce the veil" to see the true state of affairs and to examine whether guidelines/regulations are framed so as to achieve some other purpose than the welfare of the animals.

"Regulations or guidelines, whether statutory or otherwise, if they purport to dilute or defeat the welfare legislation and the Constitutional principles, Court should not hesitate to strike them down so as to achieve the ultimate object and purpose of the welfare legislation. Court also has a duty under the doctrine of parents patriae to take care of the rights of animals, since they are unable to take care of themselves as against human beings."

Accordingly, the petition seeks for the declaration of such practices as illegal, unconstitutional and violative of Articles 14 and 21. It further seeks for directions to the Central and State Governments to make necessary amendments in the Prevention of Cruelty to Animals Act, 1960 in order to make the punishments more stringent.

It also seeks for directions to fulfill vacancies in the Forest Forces and for issuance of guidelines for the creation of an SOP in the States to deal with such incidents and deaths of animals due to accidents and the usage of scientific means when such conflict arises and to achieve the goals of mitigating Animal Human Conflicts.

The plea lastly prays for guidelines for the careful and sensitive handling of such news by media and concerned authorities so as to not create any friction in the society and for the real time data of animal deaths to be maintained by the appropriate authority along with periodic updates through press releases to stop the dissemination of fake news.
Click Here To Download Petition
[Read Petition]
Next Story
Similar Posts
+ View more
Webinars
+ More
Law Firms
+ More
Latest News
+ More
लाइव लॉ हिंदी
+ More
International
+ More
Environment
+ More