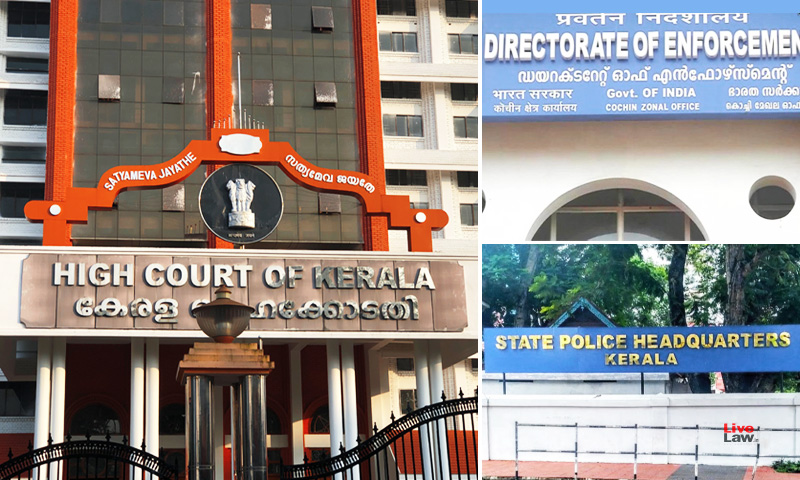 The Kerala High Court on Friday quashed the two FIRs registered by the Kerala Police Crime Branch against "unnamed officials" of the Enforcement Directorate for allegedly coercing the accused in the gold smuggling case to give false incriminating statements implicate Chief Minister Pinarayi Vijayan and other state functionaries.In a judgment pronounced on Friday, the High Court held that the...

The Kerala High Court on Friday quashed the two FIRs registered by the Kerala Police Crime Branch against "unnamed officials" of the Enforcement Directorate for allegedly coercing the accused in the gold smuggling case to give false incriminating statements implicate Chief Minister Pinarayi Vijayan and other state functionaries.

In a judgment pronounced on Friday, the High Court held that the bar under Section 195(1)(b) of the CrPC was attracted in the case against the FIRs. As per Section 195(1)(b) CrPC, the cognizance of an offecne relating to fabrication of evidence in a matter pending before court can be taken only on the basis of a complaint filed by that Court.

The High Court held that the police could not have registered the FIRs for Section 193 IPC(offence relating to false evidence), in view of the bar under Section 195(1)(b) CrPC. The Court also observed that the other offences mentioned in the FIR are "undoubtedly interwoven and inseperable" with Section 193 IPC.

"...the offence under Section 193 IPC being a non-cognisable offence, the Crime Branch could not have registered the crimes without following the procedure under Section 155(1) Cr.P.C, despite the deeming clause under Section155(4). Hence, the remedy of the aggrieved persons was to approach the Special Court", the order passed by a bench of Justice VG Arun said.

The Court held that the proper remedy would have been for the police to approach the Special PMLA Court, which has taken cognizance of the ED's final report, with the complaint that the ED officials were fabricating evidence.

As regards the FIR registered with respect to the alleged coercion of smuggling accused Sandeep Nair, the High Court noted that his statement under Section 161 CrPC has been recorded. Taking note of this fact, the Court said that the Special Court will be at liberty to look into the materials collected by the Crime Branch following the procedure under Section 340 CrPC.

""As far as the instant cases are concerned, the Special Court has already received the complaint of the accused Sandeep Nair and has allowed the application of the Crime Branch to question him in jail. The 161 Statement of Sandeep Nair recorded thereafter was made available to me in a sealed cover. In my considered opinion, while interdicting the police from continuing the investigation, the interest of justice requires the Special Judge be permitted to look into the materials collected by the Crime Branch treating it as a petition under Section 340(1) CrPC so as to decide whether it is expedient to conduct an inquiry", the bench noted in the order.

The Court directed that the materials collected by the investigating officers be produced before the Special Court in a sealed cover.

"The Investigating Officers shall forthwith submit all records pertaining to the crimes before the Special Court in a sealed cover. The learned Special Judge can look into those records and other materials, if any available, while deciding whether it is expedient to conduct an enquiry".

The Court had earlier directed that no coercive action be taken against officials of the ED and had recorded an undertaking made by Senior Public Prosecutor that official witnesses would not be called till the matter was decided.

"There has to be some deference to the court. We were in the midst of hearing the other case", Justice Arun told the Prosecutor on this occasion.

Solicitor General Tushar Mehta had submitted that the issue of "cooperative federalism" was involved in the case and law never contemplated one investigating agency examining the correctness of evidence collected by another agency. If the FIR is permitted, it will mean that no central agency can investigate in a state fearlessly and independently(Detailed account of SG's arguments may be read here).

During one of the hearings ASG Raju for the ED argued that two FIRs were permissible only in a counter-case, and not where the FIRs were the same.

"Sandeep was already there, so no discovery, no different version, it's the same thing, same wine in different bottle..I can understand if Sandeep was not in the first picture .. If test of sameness is applied, second FIR has to go. The first FIR has Swapna and Sandeep, you cannot pick out Sandeep from the first FIR and say the two FIRs are different," ASG Raju argued.

The detailed hearings saw submissions on whether the investigation by the Crime Branch affected cooperative federalism, and elaborate deliberations on the scope of the provisions of the Indian Penal Code and Code of Criminal Procedure in question in the case.

Timeline and links to reports of hearings