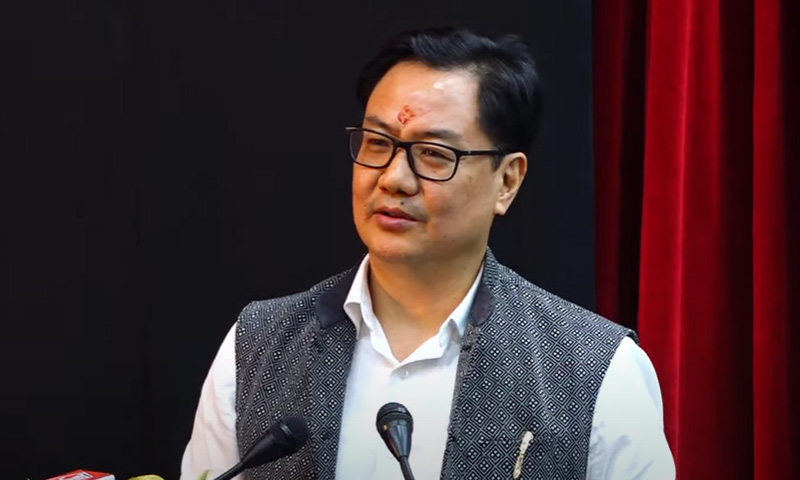 "Speedy and affordable delivery of justice is the legitimate expectation of the people and the collective responsibility of all organs of the State. Access to justice has been recognised as an integral part of the legal framework under the Constitution. All stake-holders are expected to work in tandem to deliver this mandate", expressed Union Law Minister Kiren Rijiju on Saturday.He...

"Speedy and affordable delivery of justice is the legitimate expectation of the people and the collective responsibility of all organs of the State. Access to justice has been recognised as an integral part of the legal framework under the Constitution. All stake-holders are expected to work in tandem to deliver this mandate", expressed Union Law Minister Kiren Rijiju on Saturday.

The Minister stated that for many people, coming in contact with the justice system can be an arduous process because of its complexity- the poor and marginalised find it difficult to access and navigate due to various obstacles such as lack of financial resources, awareness on how to access the justice delivery system, insufficient command of the local language and long travel distances to reach the legal services provider. Legal illiteracy and lack of awareness about entitlements and duties under various laws and schemes are the barriers to access to justice. "As a result, legal aid is often the only means for them to overcome such barriers. For this, there has to be better cooperation between legal services authorities and various departments and agencies of the government", he said.

The Law Minister was of the view that efforts need to be taken for strengthening of legal education, that law colleges have an onerous responsibility as "today's law students are tomorrow's lawyers and judges" and the quality of education and training will contribute to their success in the future and their upholding of the rule of law.

On Saturday, the Minister spoke of the Commercial Courts Act, 2015 to indicate that while the present government is focused on providing justice to the people, at the same time, its focus is also ensuring 'ease of living'.

"When we talk of 'ease of living, ease of doing business is very crucial to make our society prosperous. I have something to say about the commercial courts. You all know the advantages of the Commercial Courts Act, 2015. The success of any law to a great extent depends upon its implementation at the level of the executive as well as the cooperation of the judiciary. While litigation in the country is divided broadly into the areas of civil and criminal practice, the Commercial Courts Act, 2015 carves out an area of litigation out of the civil practises which require competent advocates and trained judges to spread its benefits. Accordingly, the Commercial Courts Act recognises that judges having experience in commercial disputes are important for their expeditious disposal and also provides for their training and continuous education. The other important steps provided for by the Act is to mandate the courts to have case management hearings once pleadings are completed, wherein the courts would frame the issues and set the matter for trial, filing the written arguments and addressing arguments in a time-bound manner."

"The Act requires that the endeavour should be to restrict the adjournment to bare minimum. Pre-Institution mediation and settlement mechanism was introduced in 2018 to provide for mediation as a preferred mode for the resolution of commercial disputes. The endeavour of the law is to lessen the burden of courts but also boost investor confidence in the Indian legal system so that more investment could be attracted. This mechanism not only saves time but also saves a major portion of cost with regard to payments of advocates' fees, court fees. As per a report of 2015, it takes 1445 days to decide a commercial dispute at the court of first instance and involve incurring a cost equivalent to 31% of the claim value. Ease of dispute resolution contributes to ease of litigants and indirectly promotes ease of living for citizens", he stated.

The Minister commended that the NALSA and the legal service authorities under its umbrella have developed a robust system of legal aid delivery and empowerment right at grassroots level that each individual can be proud of and have been playing an exemplary role in the justice delivery system by creating legal awareness.

"On September 17, I personally monitored for the whole day how everyone at NALSA is on the job and in reaching out to the remotest part of the country. NALSA schemes reach out to a variety of people- from tribals to unorganised people to the ones suffering sexual assault or drug abuse. The organisation of E-Lok Adalat is the most impressive scheme for access to justice for the marginalised. Lok Adalat has been an indigenous dispute resolution mechanism that entails providing speedy and less expensive litigation. It has managed to reduce the pendency of cases. In addition to the legal assistance, more than 90 lakh people have been helped by NALSA authorities by sending food, ration and medical supplies during the pandemic", he hailed.

He described the NALSA's pan-India Awareness and Outreach Campaign as an exemplary one, extending legal services far and wide in assisting people to secure their constitutional rights.