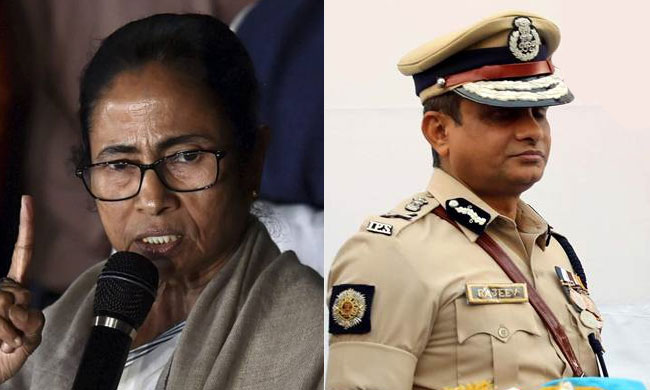 x
The CBI has undertaken to produce the materials against Kumar and Trinamool Government in "sealed cover" in Court.

The additional affidavit filed by Central Bureau of Investigation today in Supreme Court alleges that Rajeev Kumar IPS, Kolkata City Police Commissioner, destroyed evidence and connived with the accused in the Saradha Chit Fund Scam case.Kumar was the head of the Special Investigation Team constituted by West Bengal Government in 2013 to probe the case. "the entire SIT headed by Sh....

Kumar was the head of the Special Investigation Team constituted by West Bengal Government in 2013 to probe the case.

"the entire SIT headed by Sh. Rajeev Kumar, is under investigation, as the said SIT, instead of serving the purpose, was conniving with the accused/potential accused persons and was actively subverting the investigation process", says the affidavit sworn by Partha Mukherjee, SP, CBI, EOW, Kolkata.

The affidavit states that Kumar was hesitant in handing over the case materials to CBI, when it took up the probe following the SC direction in 2014. The State Police also tried to create hindrances for CBI and registered false cases against CBI officials to intimidate them, the affidavit alleges.

"in spite of the continuous insistence and follow up by the CBI, Sh. Rajiv Kumar furnished only CDRs of the prime accused only on 28.6.2018. The CDRs(Call Data Records) of the accused, when analysed by the CBI, were found to be tampered, doctored and the material evidence had been destroyed", states the 17 page affidavit filed today.

It may be noted that the bench headed by CJI Gogoi had observed yesterday that CBI's petition against obstruction by Kolkata police did not contain any allegations regarding destruction of evidence by Kolkata police. The bench was responding to the submission by Solicitor General Thushar Mehta that Kolkata police destroyed evidence in the case. At the same time, the Court granted liberty to the CBI to bring to the notice of the court any such instances.

"If the Police Commissioner or anyone else is even thinking about destroying any evidence, we will come down so heavily that they will regret it",  the Chief Justice sternly said yesterday.

The present affidavit is understandably filed in this backdrop. It says that the additional facts could not be stated in the affidavit filed yesterday, as the record was lying in the CBI office at Kolkata "which was under seize of West Bengal Police", and the officials conversant with the case were "in illegal confinement and were kept as hostages by brutal police force of West Bengal Police till night of 3.2.2109".

It says that a comparison of the CDRs given by Rajiv Kumar and the CDRs obtained by the CBI from the service providers revelead CDRs handed over by Kumar on June 26, 2018 were tampered and doctored. It further alleges that the SIT headed by Kumar had returned all laptops and mobiles seized in the case to the accused in 2013 itself, with an attempt to shield the accused.

He was earlier issued notices under Section 160 CrPC on October 18 & 23, 2017 and August 18, 2018, to appear for interrogation. The CBI states that it was forced to go to his residence on Sunday night, after he repeatedly ignored the notices issued to him.

The CBI further states that it has collected enough materials against Kumar for commission of offences under Prevention of Corruption Act and Indian Penal Code, but is not in a position to elaborately disclose everything in the affidavit, as investigation is underway. Therefore, it undertook to produce the materials in Court in "sealed cover".

The affidavit also alleges that the State Government was complicit in thwarting independent investigation in the case. The entire administration of West Bengal Government has exhibited non-cooperation and is preventing the CBI from conducting free, fair and impartial investigation.

It alleges that Saradha Chit Funds, Rose Valley and Tower Funds, which were allegedly operating ponzi shemes had close nexus with members of Trinamool Congress, as investigation has revealed transactions between them with the "party in power".

The CBI has undertaken to produce the evidence against State Government in "sealed cover".

"The action of Kolkata Police, obviously under orders from their superiors, in attacking and manhandling the CBI officers and forcefully and illegally detaining them leads to only one inevitable conclusion that there is complete break down of the constitutional machinery in the State", it says.

CBI also criticises the participation of government and police officials in the "dharna" staged by Trinamool Congress government under Mamata Banerjee.

Terming the action against CBI an "armed rebellion" against Central Government and Central agencies, the affidavit says that there is complete "breakdown of constitutional machinery in the state".

Today, the bench headed by CJI,after hearing the submissions of Attorney General K K Venugopal and Dr A M Singhvi, who appeared for WB Government, directed Kumar to make himself available before CBI for interrogation,. But the Court has asked CBI to refrain from arresting him. The questioning has to be done at a neutral place, Shillong.