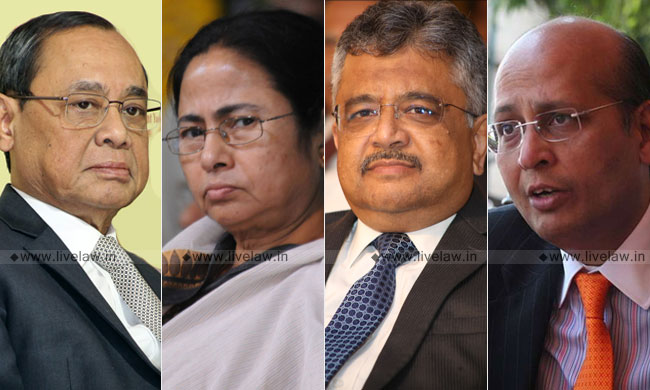 The Supreme Court  today directed the Kolkata City Police Commissioner Rajeev Kumar to make himself available for investigation by CBI in relation to Saradha chit fund scam case. The CBI has been restrained from arresting Kumar. The questioning of Police Commissioner has been directed to be made at a neutral place, Shillong.

The Attorney General K K Venugopal submitted that there was a serious breakdown of law and order in the state. "Can the state police confront Centre's police which is acting pursuant to the orders of this Court?", asked the AG, referring to the 2014 judgment whereby SC directed CBI to take up the investigation of the case.

Dr.A M Singhvi, appearing for State of West Bengal said that the whole episode was an attempt to "humiliate and harass" the state government. He said that the CBI should have approached the Calcutta High Court first.

Yesterday, Solicitor General Thushar Mehta had mentioned the matter before the bench of CJI, stating that police officials were stalling CBI investigation. He also voiced the apprehension that the police was trying to destroy evidence.

The CJI however observed that there was nothing stated in the application which suggested destruction of evidence by Kolkata police.

"If the Police Commissioner or anyone else is even thinking about destroying any evidence, we will come down so heavily that they will regret it", assured the Chief Justice yesterday.

It was on Sunday night that dramatic events unfolded in Kolkata when CBI officials who attempted to enter the residence of Kolkata police chief Rajeev Kumar for interrogation were detained by WB police. West Bengal CM Mamata Banerjee alleged that Centre was misusing CBI for political gains. She is staging a protest dharna at Metro channel area. "This is a constitutional breakdown. It is my job to protect my officers", she reportedly said. She added that CBI cannot enter the commissioner's house without warrant.

In May 2014 the Supreme Court had handed over the investigation of Saradha chit fund case to CBI.

Saradha Group raised money from lakhs of small investors through agents over last several years in West Bengal and adjoining States. Later, when the company failed to return the money, the scam came to notice of public and eventually the company owners and the top politicians allegedly involved in the scam were arrested. Trinamool MP Kunal Ghosh and the owner of the Saradha Group, Sudipta Sen, who allegedly shared cordial relationship with many TMC leaders, were arrested in the case.