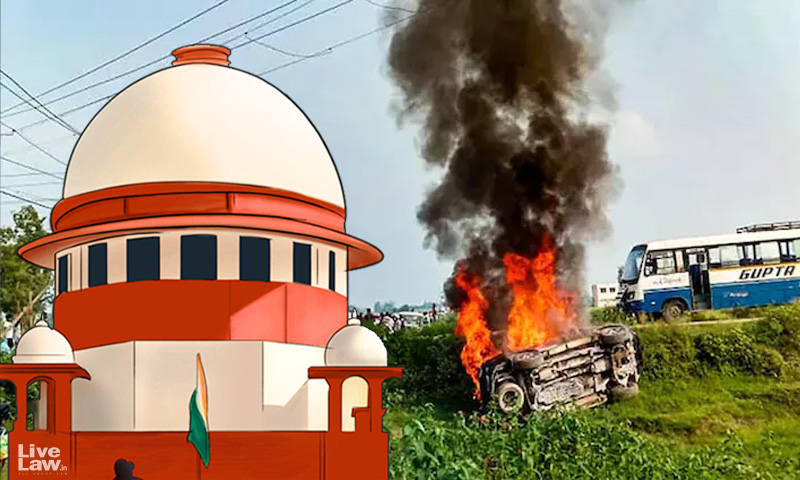 While granting interim bail to Ashish Mishra in the Lakhimpur Kheri case, the Supreme Court, in a suo motu exercise, also granted interim bail to four persons who are accused in the cross-case related to the lynching of three persons.

Although only the bail application of Mishra was before the Court, it decided to invoke its suo motu powers to grant interim bail to the accused in the cross-case as well.

Mishra is the key-accused in the case relating to the murder of five persons, who were allegedly killed when a vehicle in his convoy ran over a group of farmers who were protesting against the farm laws. The cross-case is related to the alleged lynching of two BJP workers and the driver after the car mowed down the protesting farmers. Four farmers are in custody as undertrial prisoners in the cross-case and their bail applications are pending before the Allahabad High Court. They are Gurwinder Singh, Kawaljeet Singh, Gurpreet Singh and Vichitra Singh.

"There are two separate FIRs with different narratives. But the place of occurrence and substratum of the incident are the same. The question as to who are the persons responsible for the unfortunate ghastly incident can be ascertained only after a full-fledged trial. As a necessary corollary, we, in exercise of suo motu constitutional powers, extend the benefit of interim bail to the undertrial accused involved in the other version also, namely FIR No.220/2021. Consequently, it is directed that the four accused, who are arrested and whose bail applications are said to be pending before the High Court of Judicature at Allahabad, are released on interim bail pending further orders subject to their furnishing of bail bond to the trial court".

During the hearing of the case, the bench had expressed a concern that if Asish Mishra is denied bail in the case, the farmers who are undertrials in the other case will also be deprived of bail.

Mishra has been granted interim bail for a period of eight weeks with conditions. He has been asked to leave UP and Delhi during this period. The Court will further consider the matter on March 14, based on the report given by the trial court regarding progress of trial.