Lakhimpur Kheri Case : 'We Get The Impression That You Are Dragging Your Feet', Supreme Court Tells UP Police 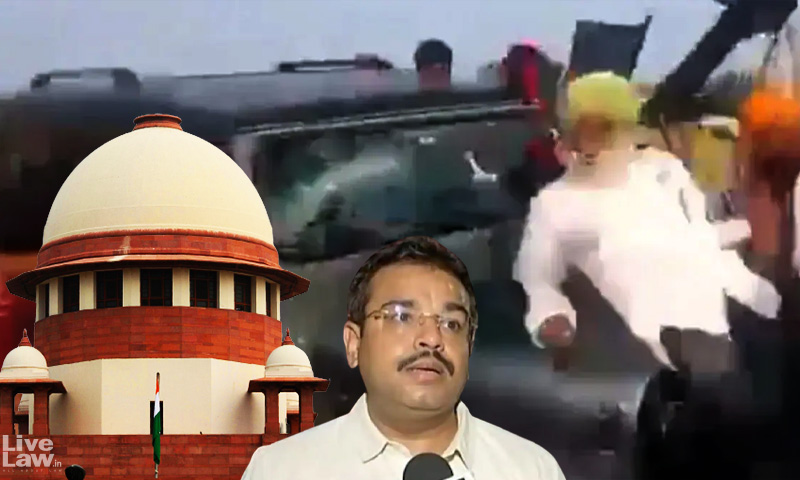 The Supreme Court on Wednesday observed that it was getting the impression that the Uttar Pradesh Police was "dragging its feet" in its investigation into the Lakhimpur Kheri violence of October 3, which claimed the lives of 8 people, four of them being farmers protesters who were allegedly mowed down by the vehicles in the convoy of Ashish Mishra, the son of Union Minister and BJP MP...

The Supreme Court on Wednesday observed that it was getting the impression that the Uttar Pradesh Police was "dragging its feet" in its investigation into the Lakhimpur Kheri violence of October 3, which claimed the lives of 8 people, four of them being farmers protesters who were allegedly mowed down by the vehicles in the convoy of Ashish Mishra, the son of Union Minister and BJP MP Ajay Kumar Mishra.

A bench comprising the Chief Justice of India NV Ramana, Justice Surya Kant and Justice Hima Kohli made this oral observation after noting that the statements of only 4 witnesses have been recorded under Section 164 of the Code of Criminal Procedure, although there are 44 witnesses.

The bench asked Senior Advocate Harish Salve, who appeared for the State of Uttar Pradesh, why the statements of other witnesses were not recorded.

Salve replied that it was probably because the courts were closed due to Dussehra vacations. But the bench pointed out that the criminal courts will not be closed during vacations.

At this point, Senior Advocate Garima Prashad, also appearing for State of UP, submitted that the police was reconstructing the crime scene. However, the bench observed that reconstruction of the crime scene and recording of the statement before the judicial magistrate were two different things.

"Recording of statements under 164 is different! Its before a judicial magistrate. It's evidentiary value is far better", CJI Ramana said.

"We get the impression that you are dragging your feet, please do the needful to dispel that", Justice Hima Kohli observed.

"You have to take steps to record the statements under Section 164", CJI Ramana said.

The bench pointed out that the Special Investigation Team will have to identify the vulnerable witnesses and afford them protection and get their statements recorded under Section 164 CrPC, as it will have more evidentiary value.

"Your SIT can recognise who are the most vulnerable witnesses and can be browbeaten.. then why only four witness statements have been recorded?" Justice Surya Kant asked.

When the case was taken, Mr.Salve submitted that a status report has been filed in a sealed cover. The bench expressed displeasure at the filing of status report "last minute".

"We received the sealed cover just now. Yesterday night till 1'o clock we waited for any additional material..but nothing", CJI Ramana said. The bench also commented that it did not ask the report to be placed in a sealed cover.

Though Salve requested for an adjournment till Friday, the bench refused. It resumed the hearing after perusing the status report.

Salve informed that 10 persons have been arrested so far in the crime related to driving of vehicle into the farmers. Four of them are in police custody and the rest are in judicial custody, he added.

The bench quizzed the senior counsel as to why the police custody of the remaining accused was not sought.

"If the forensic reports comes, there may not be need for further questioning", Salve submitted.

"It should not be never ending story", the CJI commented.

At the end, the bench adjourned the further hearing to October 26. Salve assured that the necessary steps for recording of Section 164 statements and witness protection will be taken to dispel the doubts of the bench.

The PIL was registered on the basis of a letter written by two advocates seeking proper investigation into the case.

On the last hearing date, October 8, a bench led by the Chief Justice of India had recorded its dissatisfaction over the investigation done by the Uttar Pradesh Police in the case.

What happened in the previous hearing?
During previous the hearing, the bench had asked why the accused has not been arrested. When the State Government said that that the police has served summons on the main accused Ashish Mishra, the bench asked if that was the norm in all murder cases. The bench had pointed out that it was a case of brutal murder of 8 people and in such a case, the police would normally arrest the accused immediately. The bench also pointed out that there were clear eyewitness statements.

Senior Advocate Harish Salve, who appeared for the State of Uttar Pradesh, had assured the bench that satisfactory steps would be taken and investigation by an alternate agency will be explored. The bench had recorded in the order that he will speak to the higher officials of the State Police to do the needful to preserve the evidence and materials in the matter.

Following the sharp remarks by the Supreme Court, Ashish Misra had been arrested by the UP Police on 9th October. He was arrested after he appeared before the Crime Branch office in Lakhimpur Kheri earlier that day pursuant to a notice issued to him by the UP Police asking him to appear before it by 11 am.

Misra was later denied bail on October 13th in the case by the Chief Judicial Magistrate, Lakhimpur Kheri, Chinta Ram.

He has been accused of running over his car on protesting farmers and killing 4 of them in Lakhimpur Kheri last Sunday.

On October 6th, Supreme Court had directed the Uttar Pradesh Government to file a status report by today regarding the investigation in the Lakhimpur Kheri violence containing the details of the accused and if they have been arrested.

Claiming that of late violence has become the political culture in the country now, the letter written by lawyers Shiv Kumar Tripathi and C. S. Panda prays for a CBI Probe under the supervision of the Supreme Court.

The First Information Report (FIR) against the son of Union Minister of State for Home Affairs and BJP MP Ajay Kumar Mishra 'Teni', Ashish Mishra alias Monu 302 for murder, 304-A for causing death due to reckless driving, 120-B for criminal conspiracy and 147 for rioting, 279 for rash driving, 338 for causing grievous hurt to any person by doing any act so rashly or negligently as to endanger human life along with other penal provisions at the Tikunia police station.