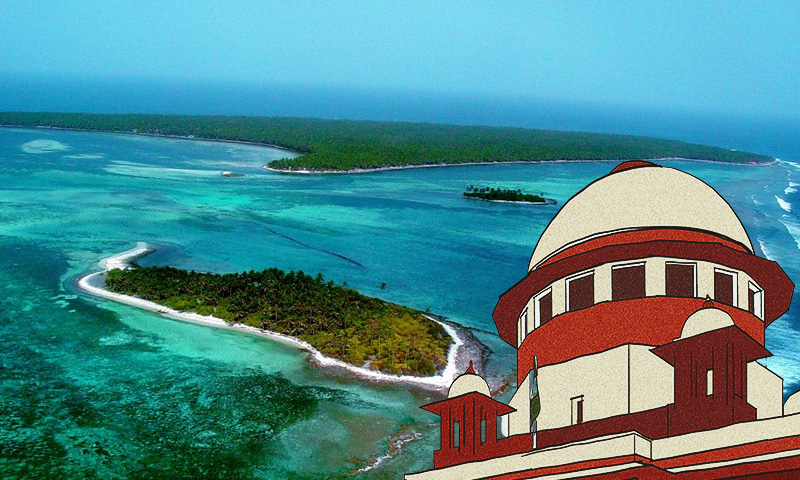 The Supreme Court on Monday directed the continuation of the interim order passed by the Kerala High Court which directed the Lakshadweep administration to include non-vegetarian food items meat and chicken in the midday meals for school children and to continue the functioning of dairy farms in the region. A bench comprising Justices Indira Banerjee and AS Bopanna passed the...

The Supreme Court on Monday directed the continuation of the interim order passed by the Kerala High Court which directed the Lakshadweep administration to include non-vegetarian food items meat and chicken in the midday meals for school children and to continue the functioning of dairy farms in the region.

A bench comprising Justices Indira Banerjee and AS Bopanna passed the order while issuing notice in a Special Leave Petition filed against the September 2021 judgment of the Kerala High Court which dismissed a PIL challenging the Lakshwadweep administration's decision to exclude chicken and meat from mid-day meals and to close down the dairy farms in the region.

(ii) Food, including meat, chicken, fish and egg, and other items, prepared and served to the school going children of Lakshadweep, as done in the past, should be continued until further orders. To make it clear, the earlier system should continue.

The directions were passed in a PIL filed by Ajmal Ahmed, a resident of Lakshadweep and a practicing lawyer.

"We are unable to understand how there could be a change in the menu of food-items given to the children, prepared taking into account, the vital aspect of health factor...Prima facie, we find no reason for the change of fooditems, with the exclusion of meat and chicken. Therefore, we are inclined to pass an interim order directing the respondents,to provide food, as done before, by including meat and chicken,to the children of the schools in Lakshadweep", the High Court had observed then.

However, on September 17, 2021, the High Court dismissed the writ petition, approving the decisions taken by the administration. Today, the Supreme Court, while considering the SLP filed by Ajmal Ahmed, directed that the interim order passed by the High Court on June 23, 2021, will continue. The Top Court has issued notices to the Union of India and the Lakshadweep administrator Praful Khoda Patel.

The order passed by the Apex Court stated :

"Issue notice, returnable in two weeks after the ensuing summer vacation.In the meanwhile, the interim order passed by the High Court on 22.06.2021 shall continue"

While dismissing the petition, the High Court observed that as per the policy of the National Programme of Mid-day meal, what is relevant is the nutritional value of the food and not the kind of food supplied. The midday meal scheme is launched by the Government to serve midday meals to the school going children, and it would, in no way, interfere with the food habits of the children at home, the Court had observed.

"Nobody can insist the State/Union Territory or the Government of India to provide them any particular kind of food in the program envisaged by the respective governments", the HC had said.

The High Court had accepted the administration's stand that the menu was altered to suit the kind of food locally available and that the National Food Security Act 2013 does not mandate the supply of non-vegetrian food.  The administration asserted that the changed menu was decided on the basis of recommendations of experts and that it caters to the nutritional needs of the children.

The HC had also accepted the administration's explanation that the dairy farms were decided to be closed as they were not financially viable.

In the petition filed before the Supreme Court, the petitioner argued that altering the food menu violates the right to choice of food under Article 21 of the Constitution and that the changes interfere with the traditional food habits of the island inhabitants. It was also contended that inhabitants of Lakshadweep engaged mostly in Government activities to eke out their livelihood. The Administrator's direction to immediately close down all the dairy farms run by the Department of Animal Husbandry and holding auctions for this regard was contended to bring grave consequences to the people on the islands.