'He Cannot Come To India Being A Fugitive' : Sibal Demands To See Lalit Modi's Power Of Attorney Used To File SLP In Supreme Court 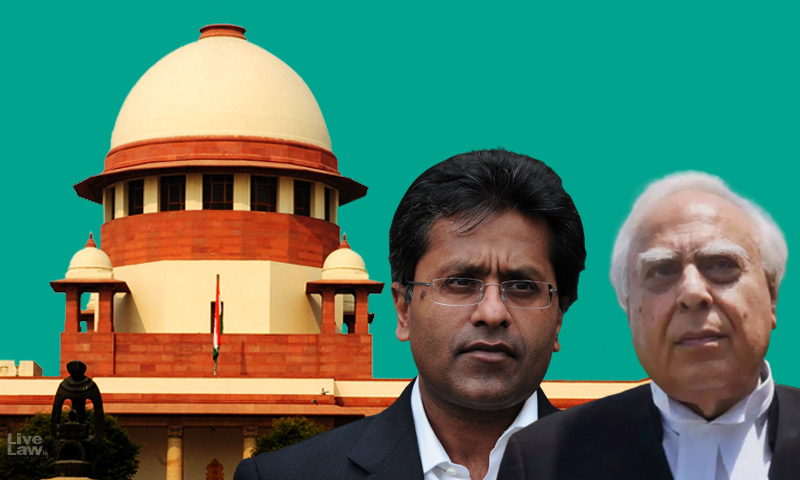 The Supreme Court on Monday considered a petition filed by businessman Lalit Modi challenging a Delhi High Court judgment which held as maintainable the anti-arbitration injunction suit filed by his mother and siblings against him.As soon as the matter was taken up by a bench headed by Justice Ashok Bhushan, Senior Advocate Kapil Sibal, appearing on caveat for the respondents, raised...

The Supreme Court on Monday considered a petition filed by businessman Lalit Modi challenging a Delhi High Court judgment which held as maintainable the anti-arbitration injunction suit filed by his mother and siblings against him.

As soon as the matter was taken up by a bench headed by Justice Ashok Bhushan, Senior Advocate Kapil Sibal, appearing on caveat for the respondents, raised an objection.

Sibal submitted that the copy served on the respondents did not have the power of attorney used to file the petition in the Supreme Court.

"The power of attorney is not annexed in the petition. He cannot come to India being a fugitive", Sibal submitted, alluding to the fact that Modi had been staying in London for past several years after Enforcement Directorate started probe against him for money laundering allegations.

"We want to know what kind of power of attorney has been used to file the petition. This is a crucial matter. That is why I am objecting", Sibal added.

Senior Advocate Harish Salve, appearing for Modi from London via video conferencing, submitted : "As per my instructions, the power of attorney is filed".

The bench, also comprising Justices R Subhash Reddy and BR Gavai, adjourned the matter to next week, after directing that a copy of the power of attorney be served on the respondents.

The special leave petition is filed challenging the judgment of a division bench of the Delhi High Court, which held that the anti-arbitration suit filed against Modi was maintainable.

Bina, Charu and Samir, in two separate suits, contended that there was a trust deed between the family members and the KK Modi family trust matters cannot be settled through arbitration in a foreign country as per Indian laws.

On December 24, 2020, the division bench held that it was settled law that "the Court would have jurisdiction to grant anti-arbitration injunction, where the party seeking the injunction can demonstrably show that the agreement is null and void, inoperative or incapable of being performed".

The division bench observed that the appellants had raised a prima facie valid argument that disputes arising out of the family trust deed was not arbitrable and hence held that the single bench ought to have proceeded with the suit.

"..we are of the considered view that the learned Single Judge gravely erred by failing to exercise the jurisdiction vested in the Court, which statutorily required him to adjudicate, whether the disputes between the parties, in relation to the Trust Deed, were per se referable to arbitration. This, in our respectful view, is tantamount to wrong exercise of jurisdiction by the learned Single Judge. The impugned judgment cannot resultantly be sustained, since it failed to consider that, the Trust Deed is not an arbitration agreement in law", the division bench observed.

The division bench expressed the view that issues under the Trusts Act cannot be the subject matter of arbitration since the same are excluded from the purview of the Arbitral Tribunal by necessary implication.

"We are also of the view that, in the present case the Arbitral Tribunal lacks inherent subject matter jurisdiction; and the present is not a case of concurrent jurisdiction, in view of the settled legal position that, disputes under the Trusts Act raised herein, are prima facie, incapable of being submitted to arbitration. We are further of the view that, in the instant case, it is the Arbitral Tribunal that evidently lacks jurisdiction and not this Court, which has the inherent jurisdiction to determine whether the disputes are arbitrable, particularly when, as in the present case, the ends of justice would otherwise be defeated", the 103-page judgment observed.

It was held that the subject dispute ought to have been prime facie adjudicated by the single judge, who had to exercise the jurisdiction vested in the court as all the parties are Indian citizens and situs of immovable assets of the trust is in India.

"We also hold that, inherent and substantive rights enure to the benefit of the Appellants, to urge that the disputes between the parties in relation to the Trust Deed were not arbitrable and that consequently, they were duly entitled to prosecute their claim for the substantive relief of declaration and permanent injunction, as prayed for", the bench said in conclusion.

The single bench had taken the view that it was for the arbitral tribunal to decide the issue of arbitrability of the dispute as per Section 16 of the Arbitration and Conciliation Act. The division bench held that the reliance placed by the single bench on Section 16 was "misplaced".

"A fortiori the impugned judgement is erroneous for its misplaced reliance on the principles enunciated in the provisions of Section 16 of the Arbitration Act-- which in view of the Constitution Bench decision in SBP & Co. vs. Patel Engineering , is only an enabling provision and does not confer exclusive jurisdiction on the Arbitration Tribunal--without rendering a decision on the issue of 'non-arbitrability' of the subject disputes. The learned Single Judge further fell into error in not appreciating the dictum of the Supreme Court in Vimal Kishor Shah (supra), wherein it was held that, a Trust Deed is not in law an 'arbitration agreement'".

The single bench had also held that Section 41(h) of the Specific Relief Act, 1963, barred courts from granting injunctions in cases where an equal and efficacious remedy could be obtained through any other mode of proceeding. The division bench disagreed with this reasoning as well observing :

According to the plaintiffs, KK Modi had trust deed in London before his death in November 2019 to record the terms of the oral family settlement between Bina, Lalit, Charu and Shamir made in 2006.

Lalit Modi's argument is that a clause in the trust deed permitted the sale of assets and distribution of proceeds if the family members failed to reach a settlement within the mandatory 30 days from the demise of KK Modi. According to the trust deed, the beneficiaries will get one year to complete the sale process.

His mother and the two siblings contended that on a true construction of the trust deed, no such sale has been triggered.

The division bench has directed the listing of the two suits before the single bench on January 8.