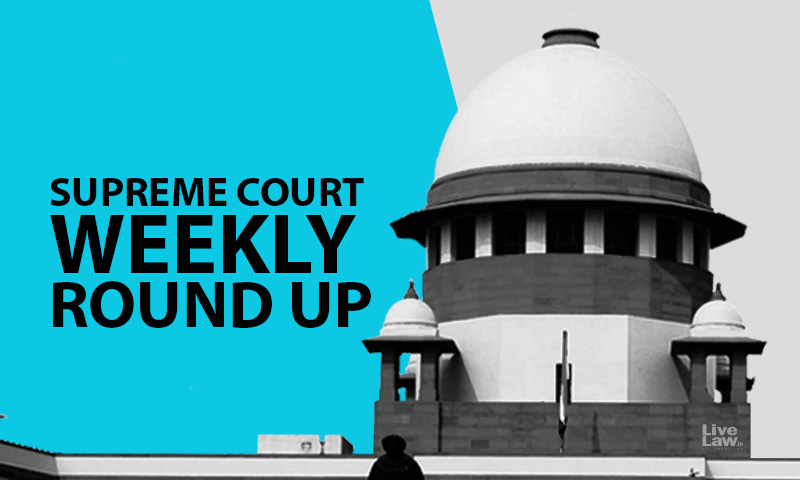 The bench comprising Justices Indira Banerjee and Krishna Murari set aside the Kerala High Court order which granting bail to a man accused murder of a lady doctor and observed that seriousness of the charge is one of the relevant considerations while considering bail applications.

According to the prosecution case, the accused, Mahesh on 28th September 2020 at about 3.30 p.m., stabbed a doctor who was about 30 years of age, with a knife, inside a multispecialty dental clinic, run by her. She was stabbed with a knife on the right side of the stomach, in the presence of her father, at the dental clinic. Though the Session's Court dismissed the bail application, the High Court allowed it observing that indefinite incarceration was not necessary.

The bench, in appeal filed by the State, observed that the power to grant bail under Section 439 of the Cr.P.C is discretionary, such discretion has to be exercised judiciously. Moreover, it was observed that seriousness of the charge is undoubtedly one of the relevant considerations while considering bail applications.

2. Purchasers Of Non-GST Goods Entitled To 'Form C' Under CST For Concessional Rate Even After GST Act : Supreme Court

Title : The Commissioner of Commercial Taxes and Another vs The Ramco Cements Ltd

A bench comprising Justices AM Khanwilkar, Dinesh Maheshwari and Krishna Murari has upheld the views taken by various High Courts that the Goods and Services Tax Act does not affect the right of purchasers of goods not covered by the GST to get Form 'C' under the Central Sales Tax Act to avail concessional tax rate.

The bench while dismissing the special leave petition of the tax department, noted that the Punjab and Haryana High Court had taken a similar view in the 2018 decision in the case Caparo Power Ltd vs State Of Haryana And Ors. The Special Leave Petition against that judgment was dismissed by the Supreme Court on August 13, 2018( SLP(c) 20572/2018).

The top court noted that nine High Courts across the country have taken the same view. "Considering the consistent view of nine High Courts, including dismissal of special leave petitions by different Bench of this Court, and being satisfied about the exposition on the matters in issue by the High Court of Madras vide impugned judgment and order being a possible view, we decline to interfere in these special leave petitions", the bench observed.

In a special sitting held on 'Holi', the bench comprising Justices Ashok Bhushan and S Abdul Nazeer granted anticipatory bail to Jude Lobo, a Goa-based restaurateur, Jude Lobo, who is named as an accused in an FIR lodged by a Delhi-based woman alleging rape.

The special sitting was held to consider the special leave petition filed by Lobo challenging the order passed by the Delhi High Court on March 26 dismissing his bail application.

"We are satisfied that the petitioner has made out a prima facie case for grant of anticipatory bail", the bench observed after perusing the FIR, statement of the victim recorded under Section 164 CrPC.

Senior Advocate Mukul Rohatgi, who appeared for the petitioner, made references to the certain WhatsApp chats between the petitioner and the woman.

2. Deposit Made Under Section 21(5) MMDRA For Illegal Mining Not "Proceeds Of Crime" Under PMLA : SC Expresses Prima Facie View

A bench comprising Justices AM Khanwilkar and Dinesh Maheshwari has expressed a prima facie view that deposit made under Section 21(5) of the Mines and Minerals Development and Regulation Act(MMDRA) for unlawful mining cannot be treated as "proceeds of crime" under the Prevention of Money Laundering Act(PMLA).

The bench made this observation while hearing an application seeking to restrain the Enforcement Directorate from proceeding against a deposit made under Section 21(5) of the MMDRA. The case will be next considered on April 7.

As per the PMLA, "proceeds of crime" means any property derived or obtained, directly or indirectly, by any person as a result of criminal activity relating to a scheduled offence or the value of any such property.

The bench headed by Justice U. U. Lalit has directed the Jail Superintendent, Tihar Jail to file an affidavit disclosing where exactly the CCTV cameras have been installed and whether the Control Room and the boundary wall of the jail are covered by CCTV cameras or not.

The Court was dealing with an instance where 3 death row convicts were involved in an incident on 15.03.2021 where in a search conducted of the concerned cell/enclosure, the three inmates including the petitioner were found to be in intoxicated condition. Upon being confronted, force was used and the officials had to use force to contain them. The father of the petitioner received information that the petitioner was badly beaten inside the prison where he is presently lodged. In the Mulakat arranged at the instance of the father, the petitioner had to be brought in, supported by two persons.

Noting that no CCTV footage is stated to be available, the bench iterated that in keeping with the directions issued by various courts from time to time and particularly in the light of the directions issued in the latest judgment of the Apex Court in Paramvir Singh Saini v. Baljit Singh (2020), the Jail Authorities are obliged to install CCTV cameras at various places in the jail.

The Court passed a direction in this regard in a writ petition filed by the President of the Kaushambi Apartments Resident Welfare Association under Article 32 of the Constitution, highlighting a magnitude of problems faced by Kaushambi, Ghaziabad residents.

The petition highlighted several issues, ranging from haphazard traffic management to environmental pollution and unrestricted dumping of municipal solid waste. As a result, it has been submitted that the residents of the area are suffering from serious respiratory issues. There is an added concern over contaminated ground water.

5. "PILs Cannot Be Thrown Out Only Because Petitioner Belongs To Rival Political Party": Supreme Court

A division Bench of Justice Indira Banerjee and Justice Krishna Murari has recently observed that a Public Interest Litigation cannot be thrown out only because the petitioner belongs to a rival political party. The Court has observed that the persons with political affiliations are, as much entitled to file public interest litigation as any other person.

The observations have been made by the Court in its order granting interim relief to Bengal CM Mamata Banerjee's election agent SK Supian in relation to matter of revived FIRs against him in Nandigram violence case.

The bench noted that its true that Court is required to examine if litigation is really in the public interest or to advance some other interest in the garb of public interest. However, the question of whether the litigation is bona fide or not is a different issue which has to be examined by the Court on a case to case basis, having regard to the nature of the complaint before it.

A public interest litigation has been filed before the Supreme Court by BJP leader and Advocate Ashwini Kumar Upadhyay, seeking directions to the Central and the State Governments to take apposite steps for controlling black magic, superstition and forceful religious conversions.

The Petitioner has relied upon the Sarla Mudgal Case (1995) 3 SCC6 635, whereby directions were issued to the Centre to ascertain the feasibility of enacting an Anti-Conversion Law.

He has submitted that incidents of forceful religious conversion by "carrot and stick", use of black magic, etc., are reported every week throughout the country. In fact, the victims of such forceful conversions are often socially and economically under privileged people, particularly belonging to the SC-ST.

Supreme Court has been approached by Abdul Nazir Maudany, accused in the 2008 serial bomb blast case seeking relaxation of condition imposed by the Apex Court while granting him bail on 11th July 2014.

An application has been filed before the top court by Maudany, Kerala-based PDP Chairman, seeking relaxation of the condition whereby he was directed to not leave the city of Bangalore. Maudany has sought relaxation to the extent that he be permitted to travel to his hometown in Kerala till pendency of trial.

The relaxation has been sought on the ground that the undertaking on the basis of which bail conditions survives have since lapsed and the trial has not been concluded even after 6 years.

A Petition has been filed before the Supreme Court [WP(C) No: 401/2021] seeking removal certain verses from the holy Quran that are allegedly negative, promote terrorism and create the menace of Islamic Terrorism in India.

The plea filed by UP Shia Waqf Board chairman , Syed Wasim Rizvi, impugns 26 verses from the Quran which he states are used as "justifications" by Islamist Terrorist Groups for attacks on non-believers/ civilians.

The plea states, "On account of the versus of Holy Quran, (more particularly described in the Writ Petition), the religion of Islam is drifting away from its basic tenets with a fast pace and nowadays is identified with violent behavior, militancy, fundamentalism, extremism and terrorism."

4. Supreme Court Issues Notice To Centre On Plea Seeking Guidelines For Police On Seizure, Preservation Of Personal Digital Devices And Their Contents

Supreme Court Bench comprising of Justice SK Kaul and Justice R Subhash Reddy to the Union of India for getting its response in a PIL seeking directions on police and investigative agencies, working under the control of Central and State Governments for specifying guidelines with regards to seizure, examination and preservation of personal digital and electronic devices and their contents thereof.

The notice has been issued to Respondent No. (Union of India) for getting its response before considering whether notices to other respondent parties (States and UTs) are required to be issued in the matter. The notice is returnable in four weeks.

A bench comprising Justices Indira Banerjee and Krishna Murari has issued notice on a special leave petition which raises the issue that whether an adolescent boy, who enters into a relationship with a girl who is less than 18 years of age, can be punished for the offence of sexual assault under the POCSO Act.

The petition is preferred against an order of the Madras High Court in Maruthupandi v. State, holding that even if a minor girl falls in love and develops a consensual relationship with her partner, the provisions of POCSO Act will be attracted against the latter.

The petition filed through Advocate Rahul Shyam Bhandari states : "Punishing teenager having a consensual affair which later tums out to be sour for any reason cannot be considered as an objective of the Act and it would only defeat the object of the Act. The Act is silent on the aspect where two individuals though may be less than 18 years, enters into a consensual relationship and in the absence of this, certainly the application of law in the Act cannot be permitted to charge and punish individuals in such relations keeping the fact of changing societal needs. Such consensual incidents certainly cannot be seen from the nature of such stringent provisions of the POCSO Act."

6. 'Nightmare To Travel From Noida To Delhi Which Takes Two Hours Instead Of 20 Minutes': Supreme Court Issues Notice In NOIDA Resident's Plea

The bench headed by Justice Sanjay Kishan Kaul issued notice to Central Government and Delhi Police Commissioner to ensure that the road area is kept clear so that the passage from one place to other is not affected. The bench was considering a writ petition filed by a woman resident of NOIDA who alleged that her travel to Delhi it is taking two hours instead of normal 20 minutes.

Monicca Agarwaal, who appeared in person, submitted that she stays in Noida and she has to travel to Delhi in connection with her marketing job. She stated that despite the various directions passed by the Court to keep the to and fro passage clear (the roads), the same still does not happen. Being a single parent who has some medical issues, she said that it has become a nightmare to travel to Delhi.