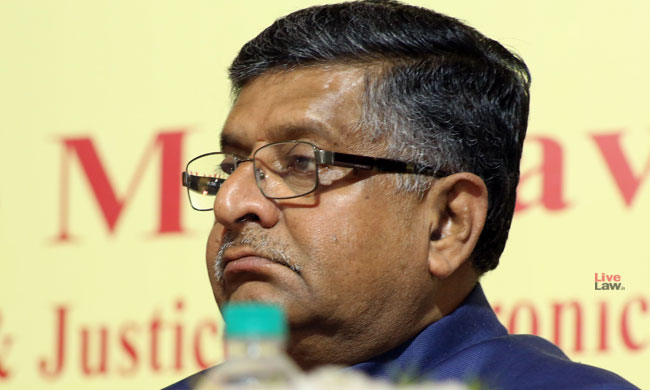 In a statement given to media soon after taking charge as the Law Minister in the newly sworn in Modi government, Ravi Shankar Prasad said that law ministry was an important stake holder in judicial appointments, and will not act as a mere post office forwarding collegium recommendations."We will try to fast-track judicial appointments, obviously with the consultation of the Honourable...

In a statement given to media soon after taking charge as the Law Minister in the newly sworn in Modi government, Ravi Shankar Prasad said that law ministry was an important stake holder in judicial appointments, and will not act as a mere post office forwarding collegium recommendations.

"We will try to fast-track judicial appointments, obviously with the consultation of the Honourable Supreme Court. We will work as a team. But I would like to say with great humility that as Law Minister, I will not be a post office. The Law Minister and the Law Ministry have a role as a stakeholder, obviously giving due respect to the collegium system," Prasad told reporters after taking charge.

"But as Law Minister, neither me nor my department will remain a post office. We have a stake and we will continue to pursue that stake in consultation with the Honourable Supreme Court and Honourable High Courts."

The last term of the NDA government had witnessed differences between the Centre and Supreme Court on the issue of judicial appointments.

In 2014, the Centre had split up the collegium recommendation to send back the name of Senior Advocate Gopal Subramanium. Last year, the recommendation for elevation of Justice K M Joseph was initially send back by Centre, leading to a controversy. The proposal was later accepted by the Centre after the Collegium reiterated Justice Joseph's name.

Recently, the proposals for elevation of Justices Aniruddha Bose and AS Bopanna to Supreme Court were initially returned by the Centre. Later, the Collegium reiterated those names, leading to the notification of their appointments by the Centre.

With the intent of replacing the collegium system of appointments, the Government had brought in an amendment to the Constitution to create 'National Judicial Appointments Commission'(NJAC). The amendment had a very short life, as within 10 months, it was struck down by a constitution bench of the Supreme Court by 4:1 majority.  The SC added that a new Memorandum of Procedure for appointment of judges had to be formulated, and asked for Centre's co-operation in the matter.

Ever since the striking down of Constitutional amendment introducing NJAC, things have not been very smooth between the Centre and the Collegium.

Because of the stand-off between the Government and the Collegium about MoP finalization, judicial appointments got delayed. The Centre dragged its feet on the Collegium recommendations regarding judges' appointments and transfers, leading to a spike in unfilled vacancies in High Courts across the country.

There was also a rising trend of sitting over files, splitting up recommendations and selective acceptances of names by the Centre during the last term. A PIL is pending in Supreme Court seeking a direction that the names reiterated by SC collegium must be notified by Cent within 6 weeks.

Prasad also said that the Ministry would discuss the proposal for creation of an All India Judicial Service and discuss the matter with the judiciary and the State governments.

"We want good people into the judicial services and the selection should be merit based. There should be an intake of the best talent," he said.

He promised that Ministry will look into the welfare measures for advocates such as medical insurance.

Prasad also hinted that the Government will do the needful to enact a law on Triple Talaq. The Bill passed by the Lok Sabha in the last session lapsed after its passage was stalled in the Rajya Sabha.