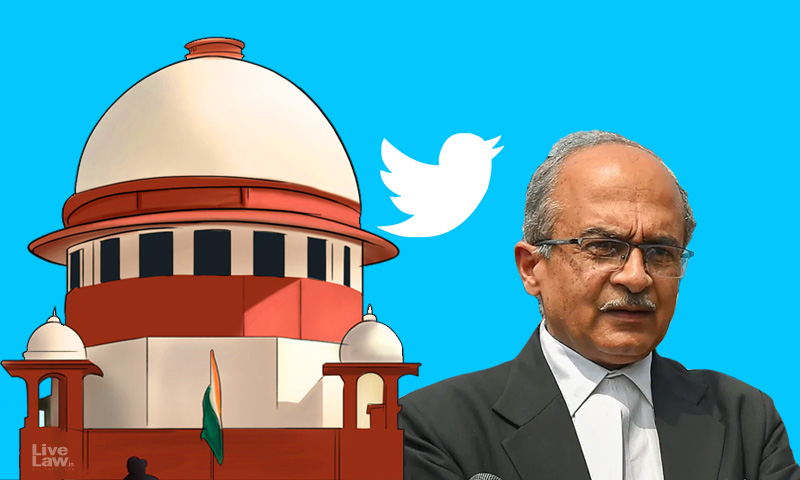 Supreme Court Advocate Sunil Kumar Singh has written a letter to the Attorney General for India, KK Venugopal, seeking his consent for initiation of criminal contempt proceedings against Advocate Prashant Bhushan for his recent tweet over CJI Bobde. Delete A Lawyer seeks AG's consent to initiate criminal contempt proceedings against @pbhushan1 over his tweet "CJI avails a special...

Supreme Court Advocate Sunil Kumar Singh has written a letter to the Attorney General for India, KK Venugopal, seeking his consent for initiation of criminal contempt proceedings against Advocate Prashant Bhushan for his recent tweet over CJI Bobde.

"The tweet by Mr. Prasant Bhushan on 21st October 2020, commenting on the personal life of the Hon'ble Chief Justice of India and connecting it with a pending case itself amounts to contempt of court…," Singh wrote.

In the impugned tweet, Mr. Bhushan has questioned the CJI for using a "special chopper" provided by the Madhya Pradesh Government, during the pendency of the case regarding disqualification of defecting MLAs of the state.

Contending that the tweet "scandalises" the Supreme Court and "prejudices and interferes with the due course of judicial proceedings and administration of justice" of a sub-judice matter, Advocate Singh has sought permission to initiate proceedings for contempt of court against Mr. Bhushan.

As per Section 15 of Contempt of Courts Act, 1971, in the case of a criminal contempt, the Supreme Court or the High Court may take action on its own motion or on a motion made by (i) the Advocate-General, or (ii) any other person, with the consent in writing of the Advocate-General.

"in common law jurisdictions, perhaps the most significant role of contempt of court law is the application of the sub judice rule: no one should interfere with legal proceedings which are pending. In practice, this rule is usually used to prohibit publication of matters which are likely to prejudice the right of a fair trial when legal proceedings are pending, or in a more colloquial sense, to prevent "trial by media"."

Reliance is placed on Attorney-General v. Times Newspaper Ltd., [1973] 2 All ER 54 where the Top Court had emphasized,

"The due administration of justice requires first that all citizens have unhindered access to the constitutionally established courts of criminal or civil jurisdiction for the determination of disputes as to their legal rights and liabilities; secondly, that they should be able to rely upon obtaining in the courts the arbitrament of a tribunal which is free from bias against any party and whose decision will be based upon those facts only that have been proved in evidence adduced before it in accordance with the procedure adopted in courts of law; and thirdly, that, once the dispute has been submitted to a court of law, they should be able to rely upon there being no usurpation by any other person of the function of that court to decide it according to law. Conduct which is calculated to prejudice any of these three requirements or to undermine the public confidence that they will be observed is contempt of court."

On August 31, the Apex Court sentenced him to pay a fine of Rupee One and deposit it with the Supreme Court Registry by September 15.

Whereas he deposited the fine, he has filed a review petition both against the contempt verdict as well as the sentencing order.