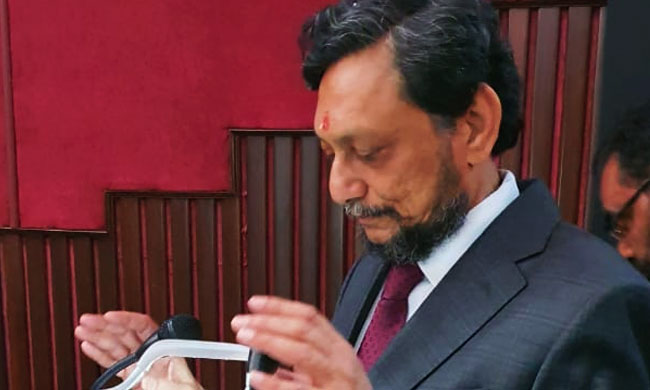 Chief Justice S A Bobde on Thursday said that he came to know recently that the word juggernaut, which is related to the Lord Jagannath, means a force that cannot be stopped.

"I came to know recently that the word juggernaut means a force that cannot be stopped and it is related to Lord Jagannath ," the CJI observed during the hearing in which the Supreme Court bench headed by him stayed this year's Puri Rath Yatra, which was to start from June 23, due to the COVID-19 pandemic.

To this, Solicitor general Tushar Mehta, appearing for the Centre replied, But, you stopped it today .

As per the Oxford dictionary, juggernaut word has its origin to the form of Krishna worshipped in Puri, Odisha, where his image is carried through the streets in an annual festival.

Besides the CJI, the bench also comprising Justices Dinesh Maheshwari and A S Bopanna, while hearing a PIL filed by an NGO seeking to cancel or deferment of Rath Yatra said Article 25(1) of the Constitution itself confers the right to freely profess and propagate religion subject to health.

The bench said that in the interest of public health and safety of citizens, this year's Rath Yatra at Puri in Odisha can't be allowed.

"Lord Jagannath won't forgive us if we allow this year's Rath Yatra to go on", CJI Bobde said, adding that as such a huge gathering can't take place during the pandemic.

While the Rath Yatra festival, held over 10-12 days with lakhs of people participating, was scheduled for June 23, the 'Bahuda Jatra' (return car festival) was fixed for July 1.

Three heavily built wooden chariots of Lord Jagannath, Lord Balabhadra and Devi Subhadra are traditionally pulled by thousands of devotees over a distance of three kilometres twice during the nine-day festival of the Trinity at Puri.