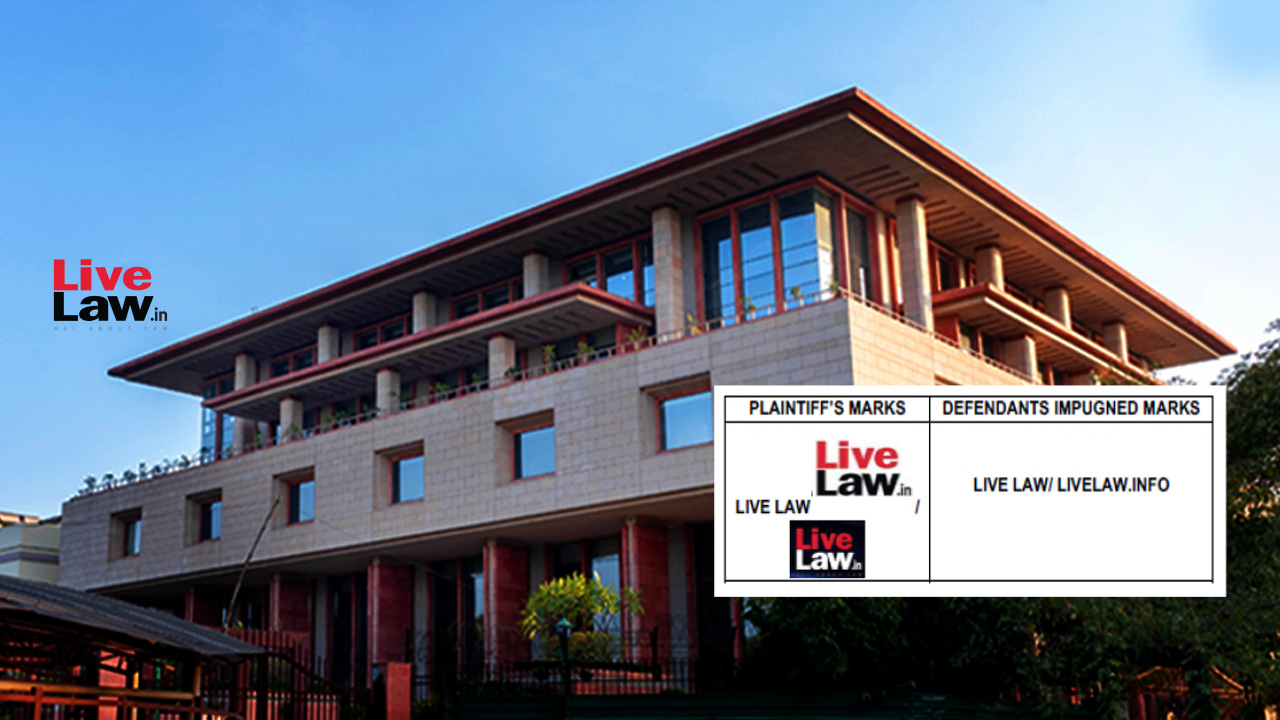 Passing an ad interim injunction in favour of Live Law Media Private Limited, the company which runs the legal portal LiveLaw, the Delhi High Court has restrained 'Tiya Law Library' and a Haryana-based lawyer from using the mark/name 'Live Law' till further orders and directed the internet service providers to block access to a website being run by them under a domain deceptively similar...

Passing an ad interim injunction in favour of Live Law Media Private Limited, the company which runs the legal portal LiveLaw, the Delhi High Court has restrained 'Tiya Law Library' and a Haryana-based lawyer from using the mark/name 'Live Law' till further orders and directed the internet service providers to block access to a website being run by them under a domain deceptively similar to livelaw.in.

Live Law filed a suit before the Delhi High Court seeking permanent and mandatory injunction restraining infringement of its trademark and domain name. The defendants - Tiya Law Library and Sanjeev Kumar Sharma, had registered one website called 'www.livelaw.info' and had been using various e-email addresses containing word 'livelaw', according to the averments in the suit. The defendants purportedly offered similar services like judgments search and subscription plans .

In an ex parte interim order passed on Monday, Justice Pratibha M Singh, after perusal of the documents produced, said that the defendant number 2 - Sharma - has started the portal 'livelaw.info' with the "clear intention of encashing upon the goodwill and reputation" of Live Law's mark and name.

"Considering the use of an identical mark/name in respect of identical services being offered by the Defendant Nos.1 and 2, as also, the subscriber base and immense goodwill of the Plaintiff, this Court is of the opinion that the use of the mark 'LIVELAW.INFO' and the domain name 'www.livelaw.info' would be violative of the Plaintiff's rights in the mark 'LIVE LAW'. Therefore, the Plaintiff has made a prima facie case for the grant of an interim injunction," the court ordered.

Directing the ISPs to block access to the website, the court said Live Law may further communicate the order to the Domain Name Registrar, Godaddy.com. The DNR has been directed by the court to ensure that the registered domain name of defendants is blocked or suspended "and status quo is maintained as to the ownership of the said domain name, within 48 hours."

However, the court clarified that the interim order shall not be deemed to be conferring any exclusive rights on the use of the terms 'Live' or 'Law' disjunctively. "The exclusivity of the use of the mark/name 'LIVE LAW' by the Plaintiff would extend only to the use of the words 'LIVE' and 'LAW' as a combination or in conjunction in the same order," the order said.

The counsel submitted before the court that an email was received by Live Law Co-founder from Tiya Law Library through an email address '[email protected]' offering monthly, quarterly, half yearly and annually plans for their website. The court was further  informed that same email was also marked to various law firms and other members of the legal fraternity.

"The impugned website of the Defendants offers services which are identical to that provided by the Plaintiff i.e., legal news, including copies of judgments, etc. Thus, Defendant Nos.1 and 2 are using an identical mark/name in respect of an identical service," Majumdar argued before the court.

The court was also informed that the website of defendants shows they are operating from a chamber in Lawyers Chamber Complex in Karnal and that it is clear that Sharma is the allottee of the chamber.

Justice Singh noted that Live Law mark was registered in 2016 and has been in use since 2013. The court also perused Live Law's traffic analytics report for the months between June to August 2020. It thus said:

"A perusal of the said report shows that, between June, 2022 to August, 2022, the worldwide traffic for the Plaintiff's website is to the tune of 28.31 million, which clearly shows that the Plaintiff's online portal is extremely popular and used by various stakeholders in the legal community."

The court also noted that 'Who is' reveals that defendants have availed privacy protect features and tried to conceal their proper details while registering the domain name.

Directing that compliance of the order be done within one week, the Court posted the matter for further hearing on December 15. Meanwhile, the court issued summons to defendants on Live Law's suit and said written statement be filed within 30 days.

"List before the Joint Registrar for marking of exhibits on 16th November, 2022. It is made clear that any party unjustifiably denying documents would be liable to be burdened with costs," said the court.