Live Streaming : CJI Expresses Concern At Circulation Of Clips Taken Out Of Context; Says Sanctity Of Institution Must Be Maintained 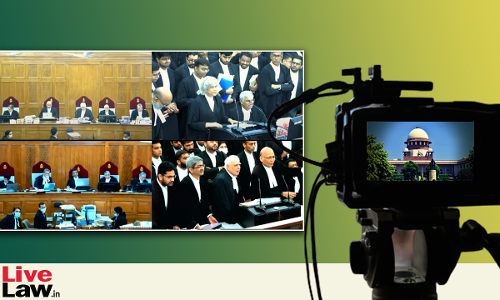 The Supreme Court on Friday said it is contemplating to have an independent platform for live-streaming court proceedings so as to institutionalize the whole process for generations to come.

"Most of the High Courts are doing it on YouTube. We now thought we can have our own platform for carrying out live-streaming...We want to have an institutionalised process. During pandemic, we "had to" do it in an ad-hoc manner. Now, what we do is going to be for posterity. It is a complex and large country with different degrees of access to interest. We have to also keep that in mind."

CJI said that SC's E-Committee wants to issue an 'Expression of Interest' and have an agency to create own platform for live-streaming.

During the hearing, Senior Advocate Indira Jaising also urged the Court to provide easy access to VC links. "Several HCs are putting the links on the causelist itself. If it can be a uniform policy."

The CJI has asked the Registry to examine this suggestion.

Jaising also sought that the Court should maintain transcripts of the hearing. However, the CJI responded that the cost for the same is very high.

"If you have to make a transcript physically then we need a large number of people...For transcription services, the cost is pretty steep for transcription. It is now being used in some Arbitration matters."

CJI also expressed concern over circulation of small clips from court proceedings in social media. "Often clips are taken out of context. We have to ensure that in the process the sanctity of the institution is maintained," he said. He said that once the regular platform is operationalised, only the live videos will be streamed and the access to archives will be given only to genuine persons on making an application. "After the proceedings the access may only be given to bonafide persons, like researcher, litigant etc", CJI said.

Earlier also, the Supreme Court had indicated its inclination to have a "national infrastructure" so that even High Courts and others can use it. In September, the Supreme Court took the historic step to commence the live-streaming of the hearings before the Constitution Benches. The live-streaming received huge public response with lakhs of people watching the videos.

Last month, the Court had issued notice on a petition which sought directions to retain the Copyright of the Supreme Court over the live-stream videos uploaded in YouTube.