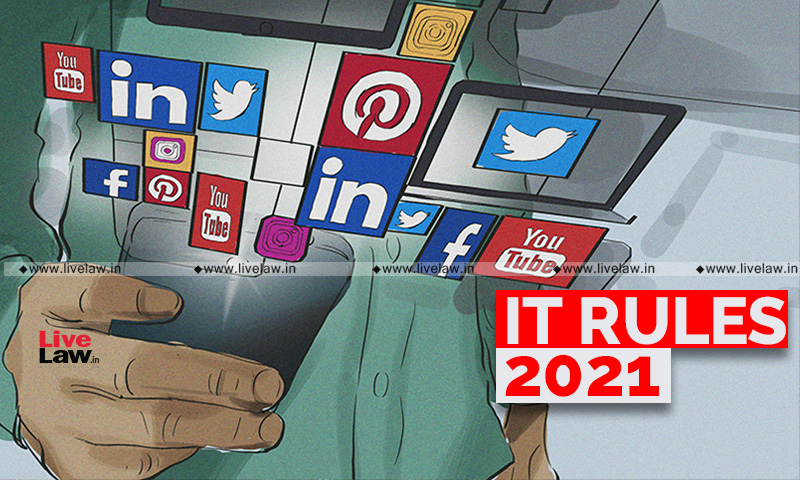 The Madras High Court on Thursday recorded that the Bombay High Court's order dated August 14, 2021 staying the operation of sub-rules (1) and (3) of Rule 9 of the Information Technology (Guidelines for intermediaries and Digital Media Ethics Code) Rules, 2021 (IT Rules 2021) ought to have a 'pan-India' effect. Sub-rules (1) and (3) of Rule 9 mandate adherence to the Code of Ethics which...

The Madras High Court on Thursday recorded that the Bombay High Court's order dated August 14, 2021 staying the operation of sub-rules (1) and (3) of Rule 9 of the Information Technology (Guidelines for intermediaries and Digital Media Ethics Code) Rules, 2021 (IT Rules 2021) ought to have a 'pan-India' effect. Sub-rules (1) and (3) of Rule 9 mandate adherence to the Code of Ethics which is annexed to the IT Rules, 2021 and provide for a three tier structure for addressing the grievances made in relation to publishers.

Furthermore, the Court also noted in its interim order that that any action taken citing Rules 3 and 7 of the IT Rules 2021 would be subject to the outcome of the challenge to the constitutional validity of the Rules. Rule 3 speaks about the obligation to exercise due diligence by intermediaries and Rule 7 provides for coercive action against intermediaries for breach of the provisions of the Rules.

The petitions include a Public Interest Litigation (PIL) moved by acclaimed Carnatic musician TM Krishna and another petition that has been moved by the Digital News Publishers Association (DNPA) as well as journalist Mukund Padmanabhan.

A Bench comprising Chief Justice Sanjib Banerjee and Justice PD Audikesavalu observed in regards to the challenge to the constitutional validity of Rules 3 and 7 of the IT Rules,

"If there is any action taken in terms of Rule 3 of the said Rules read with Rule 7 thereof during the interregnum, it will abide by the result of the petitions and further orders herein"

Senior Advocate Rajashekhar Rao appearing on behalf of the petitioners argued against the constitutional validity of Rules 3 and 7 of the IT Rules 2021. He submitted that Rules 3 and 7 of the IT Rules impose additional obligations on an intermediary which had not been incorporated in the parent legislation i.e. the Information Technology Act, 2000 (IT Act, 2000). In particular grievance was raised against the incorporation of sub-clause (x) of Rule 3 (1) (b) which states the following,

"(x) is patently false and untrue, and is written or published in any form, with the intent to mislead or harass a person, entity or agency for financial gain or to cause any injury to any person;"

Rule 3 provides for the procedure for observing "due diligence by an intermediary." Whereas, Rule 7 envisages that if an intermediary fails to abide by the IT Rules, it would not be granted the protective exemption under Section 79 of the IT Act, 2000. In such a scenario, Rule 7 states that the intermediary "shall be liable for punishment under any law for the time being in force including the provisions of the Act and the Indian Penal Code".

It was further averred that along with the obligation imposed on the intermediary under Rule 3 (1) (c) to terminate the access or usage rights of users for non-compliance with the provisions of Rule 3 (1) (b), the provisions for grievance redressal have been made stringent in the new Rules.

The Court observed that that the new Rules confer additional obligations on intermediaries to the extent that criminal proceedings can be initiated against them for non-adherence to the guidelines prescribed by the Centre.

"Though it is submitted by learned Additional Solicitor General that Rule 3 of the present Rules are on similar lines as Rule 3 of the 2011 Rules, there appear to be key changes, particularly the introduction of sub-clause (x) in clause (b) of sub-rule (1) thereof and the additional obligation on the intermediary in, inter alia, clause (c). Any host of a website or platform would be an intermediary and an ordinary person may be denied access to the platform on the ipse dixit of the intermediary or on the intermediary's apprehension that such intermediary may be proceeded against", the Court opined.

Furthermore, a reference was also made to Section 79 of the Information Technology Act, 2000 which grants exemption from liability to intermediaries in certain cases. However, the Court noted that by virtue of the newly introduced Section 79 (2) (c) of the IT Rules 2021, this exemption would not apply if the intermediary is found not to have observed "guidelines as the Central Government may prescribe in this behalf."

Reliance was also placed in the Supreme Court judgment in Shreya Singhal v. Union of India wherein Section 79(3)(b) of the 2000 Act had been read down and further held that unlawful acts beyond what is laid down in Article 19(2) of the Constitution "obviously cannot form any part of Section 79" of the Act.

The Court also referred to paragraph 122 of the judgement wherein the Supreme Court had observed,

"It would be very difficult for intermediaries like Google, Facebook, etc. to act when millions of requests are made and the intermediary is then to judge as to which of such requests are legitimate and which are not."

Thus, the Court noted that although the instant petitions had not been moved by hosts of website platforms, nevertheless social media platforms on the website are used by one and sundry and therefore there exists a genuine apprehension 'that a wink or a nod from appropriate quarters may result in the platform being inaccessible to a citizen.'

The matter has been listed for further hearing on October 27 after the Court was informed that the Supreme Court is due to take up transfer petitions in the first week of October.