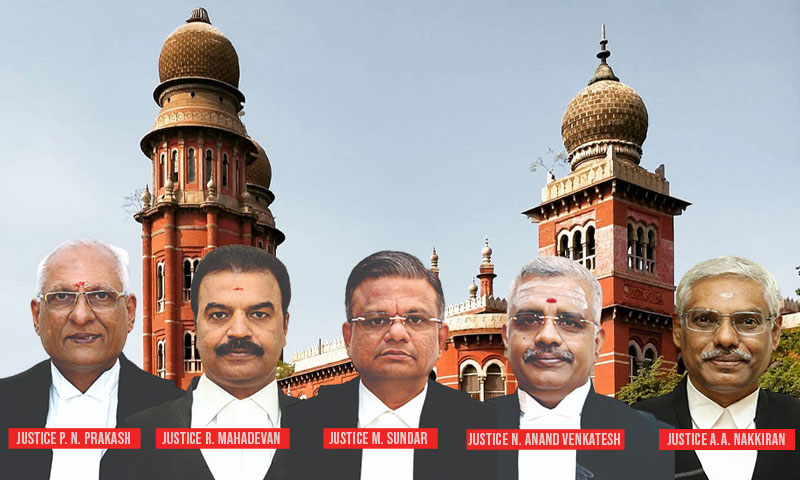 A Full Bench of the Madras High Court on Friday commenced hearing a matter pertaining to the original jurisdiction of High Court to hear child custody and guardianship matters, owing to the advent of the Family Courts Act, 1984.

On Friday, the court primarily heard arguments on how the decision in Mary Thomas case was still a good law and how the High Court continues to have simultaneous jurisdiction. Senior Advocate Arvind Datar, Advocates Geeta Ramaseshan, Chitra Sampath, Jyoti, Harisankar, Davidson, Kartik Ranganathan and Ajay Francis made submissions in this regard.

The controversy arose when a Single Bench of the High Court elaborated about the limitations of the High Court for exercising its jurisdiction on the original side in these matters. It had observed that in May Thomas (supra), the Full Bench did not refer to the Supreme Court judgment in Raja Soap Factory v S.P Shantharaj (1965) which held that the definition of "District" occurring in Section 2(4) does not include a High Court on its Original Side.

Datar mainly contended that the word District Court does not have one meaning and its meaning depends upon each Act. He stated that the Single Judge had mistaken the submissions of the defendant as the ratio of Raja Soap Factory case. The defendants, in that case, had submitted that the definition of District in CPC is the ratio. According to Section 2(4) of the CPC, "district" means the local limits of the jurisdiction of a principal Civil Court of original jurisdiction (hereinafter called a District Court), and includes the local limits of the ordinary original civil jurisdiction of a High Court. The counsel also pointed out that the decision in Raja Soap Factory was delivered by a 4 judge bench as opposed to an even number. However, Justice Sunder responded that there is no bar in having a bench with even number and if in such cases, the decision is rendered 2:2, the observation of the senior most judge will prevail.

The court orally observed that even though High Court has been defined under Article 336 of the Constitution and under the General Clauses Act, the word District Court is not defined anywhere including the Family Court Act or the CPC. What the CPC provides is only a definition of the District and considering that the principle court in that district would be the district court. Thus what is provided is a description and not a definition of the word District Court.

Datar concluded by stating that the legislature, while excluding jurisdiction had consciously used the word "District Court" and not "All Courts". Thus, the power of the High Court cannot be taken away and the Letter Patent would prevail over the provisions of the Family Courts Act.

Advocate Chitra Sampath started her submissions by discussing the various clauses under the Letter Patent. She submitted that all these clauses had an inbuilt provision for the legislature to bring in amendments. There were internal safeguards on how it can be amended and how it has to be considered. However, Clause 17 does not provide any such proviso nor gives any territorial limit. It is an independent clause and says that the High Court will have supreme power with respect to minors, lunatics etc. She stated that the jurisdiction conferred to the Family court is incidental under Section 7 of the Family Court Acts. It is limited to settling the matters arising out of the disputes pending before the court. Therefore, the jurisdiction of the High Court was not taken away. She concluded by saying that the Letter Patent was a specific law and would prevail over the general law. The Family Courts Act was only a general law specifying a form of adjudication.

Advocate N Jyothi submitted that an Act could have relief in two places and that the choice should be given to the litigant to claim relief in any of the two places. What was needed was a harmonious construction. Hence, there was no bar in the High Court enjoying a concurrent jurisdiction.

Advocate Shakespeare pointed that the High Court has original jurisdiction for appointing guardians for lunatics etc. under Clause 17 of the Letter Patent and also under the Mental Health Act.

Advocate Harisankar submitted that there should not be a blanket ousting of jurisdiction and the decision on which authority would be appropriate would depend upon each case.

"Acts which give concurrent jurisdiction to two courts is not new. When there are suits, court of lowest jurisdiction will exercise jurisdiction. In rarest of rare cases, the high court will have to take up the cases depending on seriousness," he said.

The counsel illustrated that when anything has to be issued like warrant or order to get access to a minor abroad, the High Court will have better authority than the District Court. Similarly, when both parents of the minor pass away and the grandparents fight among themselves, they'll not go to family court since that is not matrimonial dispute. They'll have to approach the High Court. Thus, it was his submission that High Court's jurisdiction should not be ousted.

Advocate Kartik Ranganathan submitted that for Clauses (a)-(f) of the Family Courts Act, different supporting enactments exist which define the words court and district court. However, for clause (g) of Section 7 which deals with guardianship, the word High Court has been consciously left out. He submitted that what has been consciously left out should not be considered for ousting the jurisdiction of the Court.

The arguments against the exercise of jurisdiction by the High Court will be considered on 13th June 2022 at 2:30pm.