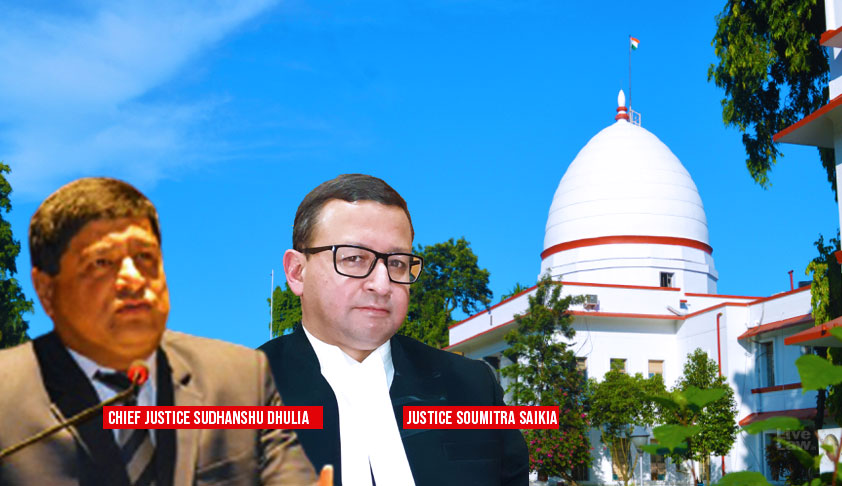 x
"The Madrasas in question, which are "wholly maintained out of State funds", cannot impart religious instructions in terms of the mandate of Article 28(1) of the Constitution of India", the Court observed.

In a significant judgment delivered on Friday (February 4), the Gauhati High Court has upheld the constitutionality of the law passed by the Assam assembly in 2020 to convert State-funded Madrassas (called "provincialized Madrasas") into general schools.

A division bench comprising Chief Justice Sudhanshu Dhulia and Justice Soumitra Saikia dismissed a writ petition filed by 13 petitioners, who were either President of the Managing Committees or the donors (mutawallis) of the lands on which the Madrassas were built. The Court rejected the arguments made by Senior Advocate Sanjay Hegde for the petitioners that the Repealing Act and the subsequent government orders violated the fundamental rights of the petitioners under Articles 25, 26, 28 and 30 of the Constitution of India.

Advocate General of Assam D Saikia clarified to the Court that the changes brought by the Government affected only "provincialised Madrasas", which were run on State funds and not the "Community Madrasas" or the "Qawmi Madrasas" and "Maktabs", which continue to function in Assam as usual.

What were the changes brought to "provincialised Madrasas"

The Government Orders challenged in the writ petition brought the "provincialised Madrasas" under the State Education Board. Religious teachings and instructions in these Madrasas are withdrawn. Fresh admissions under the old course were barred from 01.04.2021. It also directed that the teachers teaching theological subjects would now be provided training for teaching general subjects of their aptitude. Further, the State Madrassa Education Board was dissolved and all records, bank accounts, etc., of the Board was transferred to the Board of Secondary Education. Courses relating to religious education were removed and the general education curriculum was introduced.

"In a country which has multiple religions, the State has to be neutral while dealing with the matters relating to religion", the Court observed in the judgment. Affirming that secularism is a part of the basic structure of the Constitution, after referring to various Supreme Court judgments, the High Court observed :

"We live in a democracy and under a Constitution where all citizens are equal before the law. Therefore, preference given by the State to any one religion, in a multi-religious society like ours, negates the principle of Articles 14 and 15 of the Constitution of India. It is thus the secular nature of the State which mandates that no religious instruction shall be provided in any educational institution wholly maintained out of State funds [Article 28(1)]"

"Clause (1) of Article 28 is extremely important. It states in clear and unambiguous terms that no religious instructions shall be imparted in any educational institution which is wholly maintained out of State funds. There is another restriction in Clause (3), which is that an educational institution, which is receiving aid out of State funds (it may not be fully funded), religious instructions or religious worship cannot be forced upon the students. An exception is carved out in Clause (2) of Article 28 providing that an educational institution, which has been established under any endowment or trust but is being administered by the State, religious instruction can be imparted. We must state here for the sake of record that the petitioners have placed no evidence before this Court to show that they are covered by the exception given in Clause (2) of Article 28",  the Court observed.

The Court held that the madrasas ceased to be minority institutions once they were 'provincialised'.  The word "Provincialisation" would mean brining something within the fold of a province, in other words, bringing it within the ownership of the Government, the Court noted. These Madrasas were "provincialised" in 1995 and the salaries and allowances were paid from the state exchequer.

Consequently, the claim of the petitioners that these Madrasas are minority institutions and were established and administered by the minority is a claim which has no foundation and is hence not acceptable", the Court added. In this regard, the Court referred to the judgment in S. Azeez Basha -Vs- Union of India, reported in AIR 1968 SC 662.

Even if the institutions can claim minority status, they cannot impart religious instruction in view of the mandate of Article 28(1).

"The Madrasas in question, which are "wholly maintained out of State funds", cannot impart religious instructions in terms of the mandate of Article 28(1) of the Constitution of India", the Court observed.

What Clause (1) of Article 28 of the Constitution prohibits is religious instruction in an educational institution which is wholly maintained out of State funds. Petitioner's counsel raised an argument that these institutions are not fully funded by the State and they charge the students for examination fee. Rejecting this argument, the Court observed :

"Let us not forget that these educational institutions are Government institutions. It is not a grant-in-aid school. It is an admitted position that the entire salary of teaching and non-teaching staff of these provincialised Madrasas come from State exchequer. The annual maintenance, repairs of buildings etc. are all done by the State. Assuming that the students pay examination fees or tuition fees, but that in itself will not dilute the Government character of these Madrasas or make them any less "fully funded" by the State".

In this regard, the Court referred to the Supreme Court judgment in DAV College vs. State of Punjab.

The Court noted that the Government has not dispensed with the services of the teachers in the Madrassas in question. They will now be required to teach Arabic or may even be trained for teaching other subjects. Though by and large, the absorption of these teachers in Middle, Secondary and Higher Secondary Schools seems to be in order, but some of these teachers in Arabic Colleges and Title Madrasas, were also teaching students at Graduate and Post-Graduate levels. They are being placed under Secondary Board, instead of being placed under a University.

In this regard, the Court noted that after the abolition of "Sanskrit Tolls", the teachers were placed under a University. "Therefore, we direct that if such teachers in Arabic Colleges and Title Madrasas, who were so far imparting education to students at Graduate and Post-Graduate levels, their case shall also be considered for bringing under a University, like it has been done for the teachers in Sanskrit Tolls", the Court directed.

Since the teachers were not before the Court as petitioners, it directed that they will be at liberty to give a representation to the Commissioner and Secretary, Education (Secondary) Department, and a speaking order should be passed after considering the same as per the observations made in the judgment.

Case Title : Md. Imad Uddin Barbhuiya and others versus The State of Assam and others