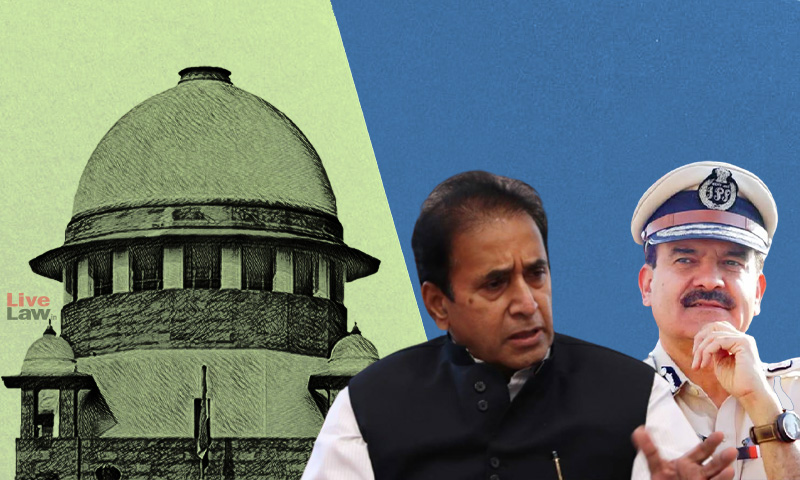 The Maharashtra Government has approached Supreme Court Challenging the Bombay High Court Order directing CBI to conduct preliminary inquiry in to the corruption allegations made by former Mumbai police chief Param Bir Singh. The Special Leave Petition filed by the Maha Vikas Agadi government seeks to set aside the High Court order for preliminary enquiry into the extortion...

The Special Leave Petition filed by the Maha Vikas Agadi government seeks to set aside the High Court order for preliminary enquiry into the extortion allegations levelled by former Mumbai Police Commissioner against the Home Minister(since resigned) Anil Deshmukh.

Deshmukh raises the following arguments to challenge the judgment passed by a division bench of Chief Justice Dipankar Dutta and Justice GS Kulkarni on April 5 :

"In the annals of judicial history, there has hardly been an occasion when the court has taken the statements made against a sitting minister at face value and proceeded to direct an outside agency, without calling for a response from the minister, to conduct a preliminary inquiry. These allegations wele made after the erstwhile commissioner of police was transferred, and evidence sought to be created with intent. These aspects require to be looked into before the Court took the extreme step of directing a preliminary enquiry by the CBI".

Deshmukh takes objection to the fact that the High Court did not opt to follow the well settled procedure of ordering a court-monitored investigation by a Special Investigation Team constituted by it, instead of handing over the investigation to an agency "controlled by the Central Government".

It is also highlighted in the petition that Parambir Singh's allegations are not substantiated and are motivated. Had the Court given an opportunity to him to respond, he could have demonstrated the falsity of the allegations, Deshmukh says in the plea.

"The erstwhile Commissioner of police has referred to alleged conversations by others, which is pure hearsay, not produced any substantive evidence before Court, that can, in law, be relied upon, and without giving notice to the Petitioner, has handed over investigation to an agency which the State Government has least confidence in. If this principle were to be followed, and courts under Article 226 of the Constitution were to accept bald and motivated statements of this nature, made much after the alleged incidents, without any actionable evidence before Court, then the Petitioner believes that such processes may well be followed to destabilize governments", the plea states.

The Bombay High Court on Monday directed CBI to complete the preliminary enquiry within 15 days and decide the further course of action regarding the registration of FIR following that.

The High Court had  held that an un-biased probe is required to "unearth the truth."

Observations by the High Court

The Bombay High Court observed that the allegations made by former Mumbai Police Commissioner Parambir Singh against the Maharashtra Home Minister Anil Deshmukh are of a "serious nature", which warrant a preliminary enquiry by the Central Bureau of Investigation.

"Prima facie, the issues are such that the very faith of citizens in the functioning of the police department is at stake", a division bench comprising Chief Justice Dipankar Dutta and Justice GS Kulkarni held.

Some of the crucial observations made by the Court in the judgment are as follows :

"If there is any amount of truth in such allegations, certainly it has a direct effect on the citizens' confidence in the police machinery in the State. Such allegations, therefore, cannot remain unattended and are required to be looked into in the manner known to law when, prima facie, they indicate commission of a cognizable offence".

"It is, hence, certainly an issue of credibility of the State machinery, which would stare at the face when confronted with the expectations of the law and when such complaints are received against high ranking public officials. This Court cannot be a mere spectator in these circumstances"

"Thus, when high officials are likely to be involved and a question of public confidence in the impartial working of the State agencies arises, the writ court in exercise of its jurisdiction under Article 226 of the Constitution is certainly not powerless to order such inquiry and investigation by the CBI"

"To instill public confidence and safeguard the Fundamental Rights of the citizens, it is necessary that an inquiry and investigation is conducted by an independent agency and for such reasons, we consider it to be in the paramount public interest that an independent probe in the present circumstances would meet the ends of justice".

The bench rejected the objections raised by the Advocate General of Maharashtra AG Kumbhakoni against the maintainability of the PILs seeking CBI investigation into the allegations raised by Parambir Singh against Deshmukh. The bench noted that one of the petitioners, Dr.Jaishree Patil, had lodged a complaint before the police seeking action on the allegations made by Singh against the Home Minister. However, no legal action followed on Dr.Patil's complaint.

The bench said that the serious nature of the allegations and the issue of public faith in police machinery in the State justified the demand for CBI investigation.

"...it is indeed unheard of and unprecedented that a Minister could be so openly accused of wrongdoings and corrupt practices by none other than a senior police officer attracting wide attention from all and sundry"

"There is certainly a legitimate public expectation of a free, fair, honest and impartial inquiry and investigation into such allegations which have surfaced in the public domain. The necessity to have a probe into such allegations by an independent agency, would also certainly be a requirement of the rule of law. To instill public confidence and safeguard the Fundamental Rights of the citizens, it is necessary that an inquiry and investigation is conducted by an independent agency and for such reasons, we consider it to be in the paramount public interest that an independent probe in the present circumstances would meet the ends of justice"

"Here, Shri Deshmukh is the Home Minister. The police department is under his control and direction. There can be no fair, impartial, unbiased and untainted probe, if the same were entrusted to the State Police Force. As of necessity, the probe has to be entrusted to an independent agency like the CBI".