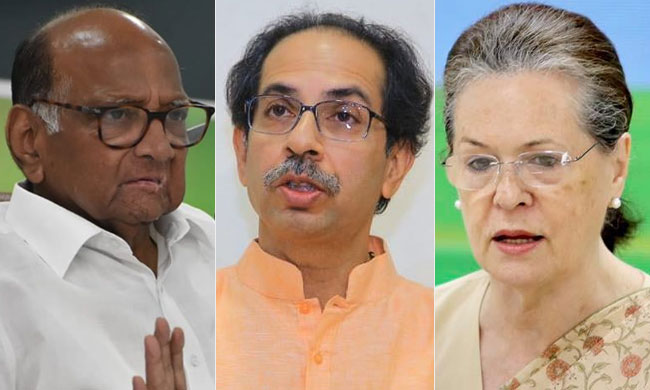 [Update : SC to hold a special sitting tomorrow at 11.30 AM to hear the petition]Amidst the political twists and turns in Maharashtra, a writ petition has been filed in the Supreme Court by Shiv Sena, NCP and Congress against the dramatic decision of the Maharashtra Governor to invite BJP to form government today morning.The legal team of the petitioners are attempting for an urgent hearing...

[Update : SC to hold a special sitting tomorrow at 11.30 AM to hear the petition]

Amidst the political twists and turns in Maharashtra, a writ petition has been filed in the Supreme Court by Shiv Sena, NCP and Congress against the dramatic decision of the Maharashtra Governor to invite BJP to form government today morning.

The legal team of the petitioners are attempting for an urgent hearing today or tomorrow.

In a surprising move, Devendra Fadnavis was sworn in as the Chief Minister by the Governor today morning. The BJP claimed support of some independent legislators and few MLAs from the NCP belonging to the faction of Ajit Pawar.

This dramatic move happened after Sena, NCP and Congress announced the decision yesterday night to form government with Uddhav Thackarey as the Chief Minister.

The Governor acted unconstitutionally by inviting BJP to form the government, ignoring the "Maha Vikas Aghadi" alliance having 154 members in the 288 member house, stated the petition filed by Sena-Congress-NCP.

The President's Rule imposed in the State on November 12 was revoked in haste on the wee hours of Saturday to facilitate the formation of BJP Government. This was done without calling for the Governor's report and a cabinet meeting, contended the petitioners.

"the Petitioners political alliance constitutes a clear majority in the House. It is submitted that the action of the Hon'ble Governor in installing a minority Government is ex facie against the basic rule of law and the rule of parliamentary democracy i.e. rule by majority.", the petition said.

As per the petition, the BJP has not placed any objective material before the Governor for showing majority. No demonstration either by letters of support or by parading of MLAs has been done by the BJP. The BJP clearly falls short of the halfway mark of 144. In any event the BJP cannot get the support of majority through legal constitutional means in the face of the anti-defection provisions of the Tenth Schedule.

"the discretionary powers under the Constitution conferred on the Hon'ble Governor are not the ipsi dixit of the Hon'ble Governor but have to be exercised within the constitutional norms and conventions guiding the exercise of such discretion. It is submitted that such manoeuvring, at the behest of the BJP through the Governor, to suit their political agenda actually amounts to a death knell to democracy which is a basic feature of our Constitution", the petition stated.

On these grounds, the petitioners seek a declaration from a Court that Governor's decision to invite  Devendra Fadnavis to form the Government as "unconstitutional, arbitrary, illegal, void-ab-initio, and violative of Article 14 of Constitution of India".

Further, the petitioners request the Court to direct the Governor to invite their alliance to form government under the leadership of Uddhav Thackarey.

The petitioners are also praying for an immediate floor test within twenty-four hours so as to "avoid further horse trading and illegal maneuvers". The Governor Bhagat Singh Koshyari has given the Fadnavis government time till November 30 to prove majority in the house.

The petition refers to the 2018 order of the Supreme Court in the Karnataka assembly case, whereby the Governor was directed to hold a floor test within 48 hours to prove the majority of Yeddyurappa government against the claims of Congress-JD(S).

Referring to Rameshwar Prasad vs Union of India, it is argued that the discretionary powers exercised by the  Governor are not beyond the pale of judicial review and any illegal and arbitrary decision taken in brazen disregard of constitutional provisions and conventions is liable to be interfered with and struck down.

The results of the assembly elections in Maharashtra announced on October 24 showed a fractured mandate, with no single party getting simple majority. BJP emerged as the single largest party with 105 seats, and Shiv Sena, who was its pre-poll ally, came second with 56 seats in the 288 member assembly. NCP and Congress got 54 and 44 seats respectively.

After the declaration of results on October 24, in a surprising turnaround, Shiv Sena withdrew from its alliance with BJP, leaving the scene open for combinations with Congress and NCP.

On November 12, the Governor recommended President's rule in the state, after Shiv Sena failed to prove majority within the deadline.

Sena had earlier approached the SC alleging that the Governor granted only 24 hours time to show majority. After the petition was filed, President's rule was imposed in the state .