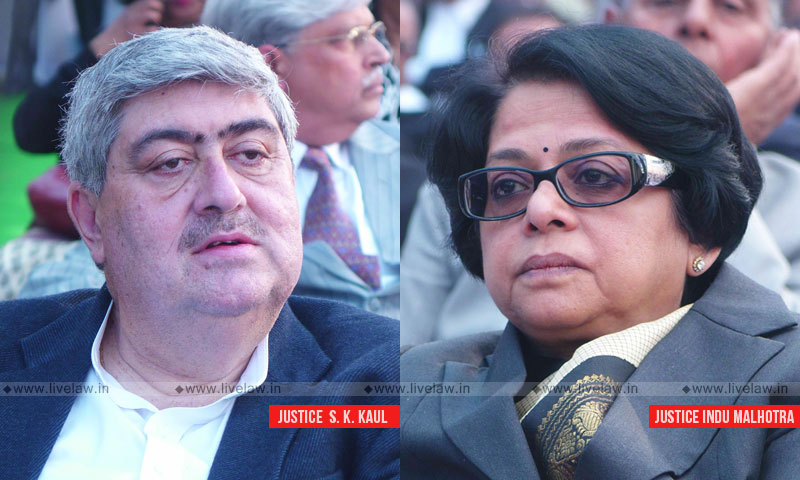 The Supreme Court, has recommended to the Central Government to consider the efficacy of the advance tax ruling system and make it more comprehensive as a tool for settlement of disputes. The bench of Justice Sanjay Kishan Kaul and Indu Malhotra observed that one of the largest areas of litigation for the Government is taxation matters and the petition rate of the tax department before...

The Supreme Court, has recommended to the Central Government to consider the efficacy of the advance tax ruling system and make it more comprehensive as a tool for settlement of disputes.

The bench of Justice Sanjay Kishan Kaul and Indu Malhotra observed that one of the largest areas of litigation for the Government is taxation matters and the petition rate of the tax department before the Supreme Court is at 87%. The court said that a vibrant system of Advance Ruling can go a long way in reducing taxation litigation.

"This is not only true of these kinds of disputes but even disputes between the taxation department and private persons, who are more than willing to comply with the law of the land but find some ambiguity. Instead of first filing a return and then facing consequences from the Department because of a different perception which the Department may have, an Advance Ruling System can facilitate not only such a resolution, but also avoid the tiers of litigation which such cases go through as in the present case. In fact, before further discussing this Advance Ruling System, we can unhesitatingly say that, at least, for CPSEs and Government authorities, there would be no question of taking this matter further once an Advance Ruling is delivered, and even in case of private persons, the scope of any further challenge is completely narrowed down."

The Court said that, though Advance Ruling was brought into effect in 1993, and a quasi-judicial tribunal was established as the Authority for Advance Ruling, this methodology has proved to be illusionary because there is an increasing number of applications pending before the AAR due to its low disposal rate. Contrary to the expectation that a ruling would be given in six (6) months (as per Section 245R(6) of the IT Act), the average time taken is stated to be reaching around four (4) years!, the bench said. The Court added that the reason for this situation is the large number of vacancies and delayed appointments of Members to the AAR.

The Court also noticed that, through Notification No.11456 dated 3.8.2000 that public sector companies were added to the definition of 'applicant', and in 2014, it was made applicable to a resident who had undertaken one or more transactions of the value of Rs. 100 crore or more. It observed:

"Insofar as a resident is concerned, the limit is so high that it cannot provide any solace to any individual, and we do believe that it is time to reconsider and reduce the ceiling limit, more so in terms of the recent announcement stated to be in furtherance of a tax friendly face-less regime! "

Mechanism should not become another stage in the litigation process.

"The aim of any properly framed advance ruling system ought to be a dialogue between taxpayers and revenue authorities to fulfil the mutually beneficial purpose for taxpayers and revenue authorities of bolstering tax compliance and boosting tax morale. This mechanism should not become another stage in the litigation process.. We, thus, consider it appropriate to recommend to the Central Government to consider the efficacy of the advance tax ruling system and make it more comprehensive as a tool for settlement of disputes rather than battling it through different tiers, whether private or public sectors are involved. A council for Advance Tax Ruling based on the Swedish model and the New Zealand system may be a possible way forward"

These observations and recommendation is made as a post script to a judgment passed in an appeal [National Cooperative Development Corporation  vs. Commissioner of Income Tax].

The Court also recommended promotion of mediation to settle disputes between Government authorities or Government departments. The Court noted that Administrative Mechanism for Resolution of CPSEs Disputes was conceptualised to replace the Permanent Machinery of Arbitration and to promote equity through collective efforts to resolve disputes.

We are of the opinion that one of the main impediments to such a resolution, plainly speaking, is that the bureaucrats are reluctant to accept responsibility of taking such decisions, apprehending that at some future date their decision may be called into question and they may face consequences post retirement. In order to make the system function effectively, it may be appropriate to have a Committee of legal experts presided by a retired Judge to give their imprimatur to the settlement so that such apprehensions do not come in the way of arriving at a settlement. It is our pious hope that a serious thought would be given to the aspect of dispute resolution amicably, more so in the post-COVID period.

Mr. Rajat Navet appeared for the petitioner in the matter.