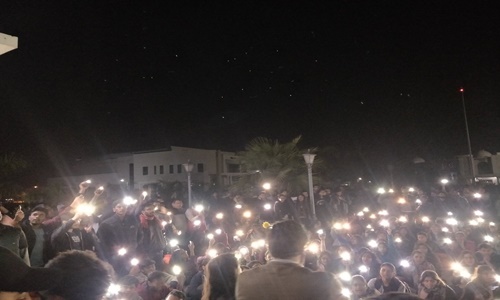 The students of Rajiv Gandhi National University of Law (RGNUL), Patiala took to the University gates this morning, as their protests against the college administration entered day three.The protests had begun on Friday against the "arbitrary and wrongful" suspension of six hostel inmates allegedly after the boys raised their voice against the quality of food being served in their hostel....

The students of Rajiv Gandhi National University of Law (RGNUL), Patiala took to the University gates this morning, as their protests against the college administration entered day three.

The protests had begun on Friday against the "arbitrary and wrongful" suspension of six hostel inmates allegedly after the boys raised their voice against the quality of food being served in their hostel. The suspension order was passed by Administrative Officer SP Singh. Students have, however, since claimed this order to be invalid, as it was issued without a proper hearing and in the absence of Vice-Chancellor Dr Paramjit Jaswal.

In a statement, the students claim that the suspended students "were subject to degrading treatment constituting a deprivation of their Right to Privacy" as their mobile phones were forcibly confiscated and their private conversations read. Thereafter, in what seemed like a retelling of the numerous protests in National Law Schools over the past year, the protests snowballed into an outcry over broader student grievances concerning maladministration in the college.

The students' statement proceeds to accuse the Administrative Officer of the University of making sexually coloured remarks and violating the dignity of women in the college. It then not just demands an enquiry into his actions but also his removal subsequently, stating,

"We submit respectfully that the mandate of the equity of sexes at an academic institution, is of utmost pertinence. The University, in spurts of cosmetic commitment to this equality, applies to rights, a regressive standard, arbitrarily taking away from students their liberty. We appeal to you that a decision, that effectively nullifies the right of free movement and access to academic facilities must not be the byproduct of this review."

While RGNUL Chancellor and Chief Justice of the Punjab and Haryana High Court, Justice Krishna Murari was expected to meet the students on Sunday, he failed to make a visit. Instead, Justice Mahesh Grover, the third senior-most judge of the Punjab and Haryana High Court arrived in the campus, in a bid to hold discussions with protesting students. However, the students have decided to continue their protests, since they have not received any written assurances as of yet that any of their demands will be met.

Support pouring in from students across the country

Meanwhile, various students bodies throughout the country have expressed solidarity with the RGNUL students. A statement issued by the Student Bar Association (SBA) of the National Law School on India University (NLSIU), Bangalore said,

"We empathise with the students of RGNUL and stand with them in their protest against the unjust acts of their administration…we stand in complete solidarity with the student body at RGNUL and wholeheartedly support their courage and decision. We support their sincere efforts to stand up against the regressive and capricious behaviour of their administration."

It also took the opportunity to emphasise on its previous statement calling for nationalisation and grant of Institutes of National Importance status to NLUs to ensure centralization of administration and accountable systems across NLUs.

Another statement issued by the Law Students Union, Punjab University said, "We, the LSU condemn the authoritative and dictatorial attitude of the RGNUL authorities and stand in complete solidarity with the protesting students of RGNUL, Patiala who have come together on a single platform to raise genuine issues of the students which have a direct concern with "Right to Life and Liberty" as enshrined in Article 21 of the Indian Constitution. We hereby extend our full support and cooperation to our protesting fellow mates who have shown grit and courage to oppose the tyrannical attitude of the RGNUL authorities."

The NLU student consortium also chimed in, with a strong statement condemning the "administrative misdemeanour, miscarriage of justice, red-tapism and sexism". The statement reads:

"We empathise with the students of RGNUL and their struggle against the draconian actions of their administration. It is agonising to witness the unreasonable and discriminatory campus and library curfew, the sheer opaqueness and the consequent lack of accountability on part of the administration for their actions and most importantly, the attempts made to thwart the materialization of any Student Collective that may become the voice of the students and the wrongful suspension of six students. It is truly disheartening to bear witness to the callous response of the authorities to peacefully protesting students.

We also extend our solidarity to the students of all the other NLUs who are confronting similar draconian regulations, where the importance of dissent and the spirit of questioning and accountability have been trampled on by those exercising unchecked power."

Besides, RGNUL's alumni association sent in a representation to the college's General Council, lending its support to the demand for an enquiry into the grievances raised by the students.